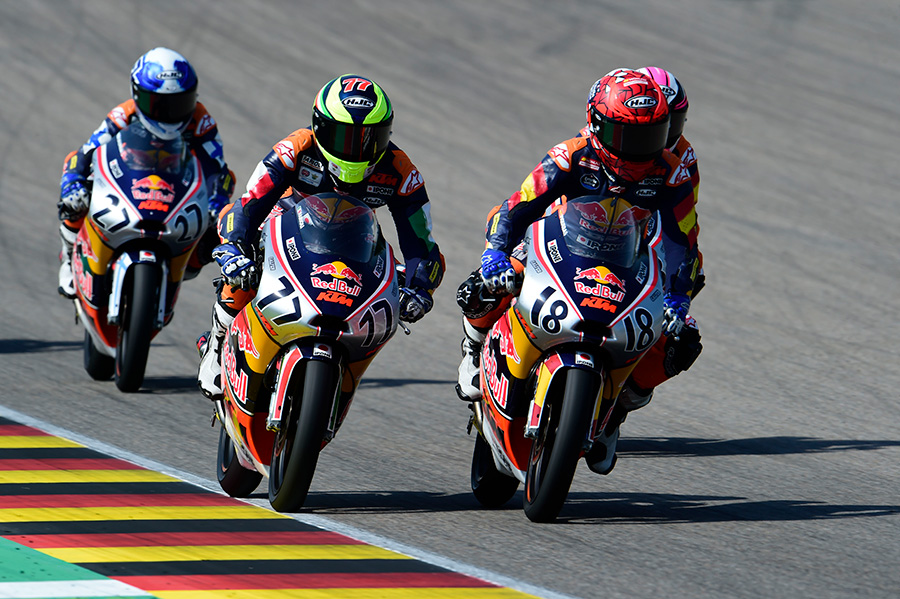 The most incredible last two corners and mass finish resulted in Red Bull MotoGP Rookies Cup Race 2 victory for Angel Piqueras over Collin Veijer and Filippo Farioli. Just 6 – 10ths covered the first 7 KTMs across the Sachsenring finish line and José Rueda, Rico Salmela, Max Quiles and Harrison Voight might equal well have been on the podium.

Victory was particularly sweet for Piqueras as the 15-year-old Spaniard slid off early in Race 1 while chasing points leader and winner Rueda. Veijer, the 17-year-old Dutchman, was sensational, passing Rueda, who had defended a narrow advantage right from the first lap, into Turn 1 on the final lap.

That set up a fabulous finale with Veijer being passed on the run down to the final two corners and 17-year-old Italian Farioli making the most audacious overtake into the penultimate left hander.

Angel Piqueras always on the limit

“I’m happy because I ran a good race, I started well and I was in second for most of the laps.”
“The last lap was a mess, with all the riders trying everything to be in front.”
“I was confident going into the race today, we had good Qualifying and yesterday’s fall was just a bad tyre. I felt good from the start of the race today and enjoyed it.”
“The end of the race was crazy, impossible to have a plan, just full gas and give it everything.”
“I’m happy because I took the win, but it is just one win, let’s see in the next round.”

“It was a very good race, better than yesterday with the shorter gearing. I got a better start, I didn’t get past many riders though but as I got into the race I started overtaking and worked my way up to 5th place.”
“Then I worked at closing the gap to the riders in front, it was quite a big gap. I closed it and got in behind Jose.”
“I felt quite strong behind him, some places he was faster, some places I was.”
“I thought on the final lap, I have to overtake him, just to get a chance at the podium. The problem was, bike was quite hot, running at 100 degrees. I managed to pass Jose on the brakes into the first corner on the last lap. I kept ahead but coming down the Waterfall they passed me, José, Piqueras and Filippo.”
“I tried to get the best exit on Turn 11 and then on the last corner I tried to do the same again, coming in as wide as I could to carry speed and I managed to get José on the exit of Turn 11 and Filippo out of 12.”
“I’m happy to be on the podium again.”

“I am very happy for this race, it was very different to yesterday.”
“The pace was faster today, I had a better feeling with the bike, I used a shorter sprocket and that was better for my weight. It all helped me to do my best.”
“Going into the last lap I had a plan but Angel passed me in Turn 3 so the plan flew away and then I just tried to do my best.
“I tried to win the race at the last two corners but it was just too difficult. I did a very good job, passing three guys going into the first but when I tried to push hard through the last corner I went wide and Angel and Collin passed me.”

“Race 2 was more difficult because it was hotter and this made the track more slippery,” explained the 16-year-old Spaniard who had won Race 1 by 10 seconds..
“The final laps were crazy, so many riders all in the front and it was quite mad, especially the last two corners.”
“I crossed the line in 4th position and that’s fine”
“It was a good weekend, pole position, a race win and for the championship I got 5 more points that Collin from the weekend so that is important.”
“I’m happy but not…. super happy.”
“Early in the race I realised that we did not have the same grip as yesterday, by about lap 8 the bike was really moving a lot.”
“I was riding 100% I could not do more. Then right at the end I touched with Farioli through the last corners and lost some ground, that cost me.”

Rico Salmela kept something back

“The race was pretty hot, the track was very slippery and we had a lot of sliding. I managed to stay in the front,” stated the 14-year-old Finn.
“Then in the last 10 laps I got very tired and I just took it easy and not try too many overtakes, just stay with the group.”
“The leaders had a small gap but at the end I pushed again, closed the gap and caught them. Then in the last lap I had a small moment, lost the group again a bit but in the last corners I caught them and managed to overtake two riders in the last corner for P5. I want to carry this good feeling to the next race.”