NOT the MotoGP News #GermanGP – ‘Ring of Fire 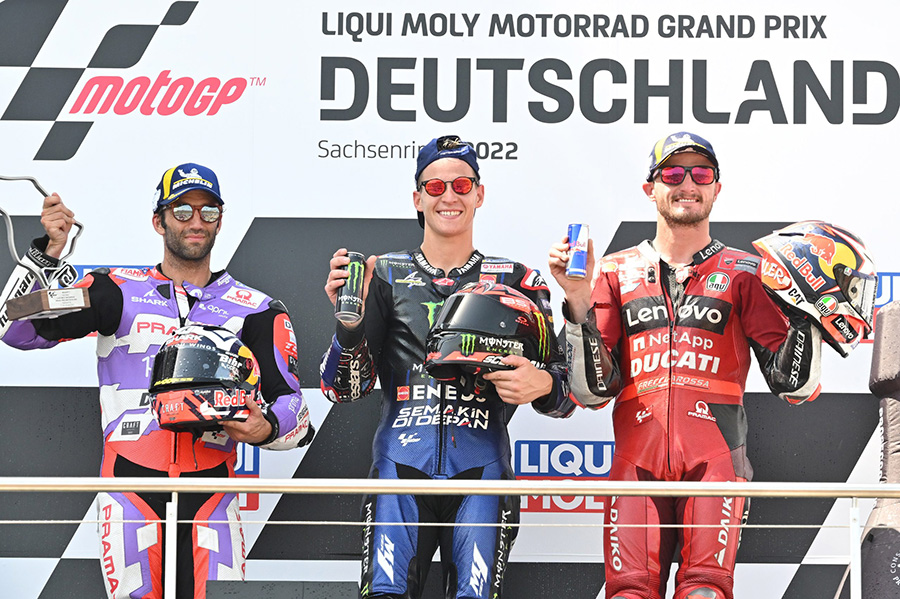 ‘Ring of Fire (and yes, no one else thought of that for headline – Ed), You Took My Breath Away Top Gun

Germany. And us in a bunker because that’s where the Ed thinks we’d be less likely to cause trouble. The irony is palpable. So was Marc’s absence. Lesser headline writers call Marc the King of the Ring. Admittedly he has won at Sachsenring a lot, but c’mon “king of the ring” is just lazy now. The person who dreamt it up must be kicking themselves by now. Or just plain sick of it. We know we are.

Does anyone miss Marc that much? With Quat riding like a cross between Lorenzo and Rossi, the gods of MotoGP are truly looking benignly down on us. Or maybe that should be down on him. He’s the only Yamaha rider doing anything with the M1 or note. Just to disprove that, here’s our brief summary of the other Yamaha riders. Dovi – retiring. Darryn – a rookie and will be riding a KTM next year anyway. Frankly – well he’ll be with Quat next season only on the paperwork. Otherwise, he will probably only see Quat on the grid and in the garage.

Yeah, ummmm, Quat won by a convincing enough gap that he slowed on the last lap so that it didn’t look too big. But it was. Even if Pecco Bagnaia (#GoFree – Ooops) hadn’t fallen at Turn 1 on the start of the fourth lap, it looked as if Quat had the measure of Pecco anyway. In a Lorenzo-esque manner, Quat snatched the lead early then proceeded to have a race all by himself. Whilst annihilating the rest of the field. As well as being reminiscent of Lorenzo, it also reminded us of Stoner too.

Mir also fell on the same lap at the same corner as Bagnaia, and his teammate, Alex Rins, didn’t even start the race with an injured hand. One of the best bikes on the grid won’t be there next season. That’s dreadfully sad. In fact, a number of Honda and Yamaha riders would no doubt take this season’s Suzukis and ride them next year, than be on their current manufacturers’ 2023 bike.

Winner of 2022’s Dark Horse of the Apocalypse award, Johann “J-Zee” Zarco, just keeps surprising, well, everybody to be honest. Tossed away by KTM, and only just managing to pick up a satellite seat with Pramac because no one else wanted to rider that year’s Ducati, J-Zee has sneaked under the radar at pretty much every round. The piano playing, back-flipping Moto2 Word Champ inherited second place on the 4th lap benefitting from Pecco’s fall and didn’t let go. This pleases us no end. Two Frenchmen on the top two podium steps. Allez! (Who are you trying to impress? Yet another French waitress? – Ed).

Jackeroo Miller had the best race he’s had for a while. Penalised for riding like an Aussie on a kangaroo in qually, he copped a LLP, which he dispensed with more deftness than Race Control imagined he would. And worked his way up to finish third. Points and a podium. Fair dinkum Jack.

Now, we’re not sure how to write this, and we had to watch it twice to make sure, but by Lap 7 Top Gun was back! Number 1 in the cinemas and 4th in MotoGP! Viñales had found his Goose and his mo-jo and hooked the ‘Prilly up to the aircraft carrier steam launch hook and he was flying! Until the nasty baddies scuppered his Mission Impossible and screwed with rear height ride device. For fans of military flying films this device has the acronym of F.U.C.K.E.D. Viñales had been giving top ‘Prilly rider Aleix Asparagus the race of his season so far, and possibly looked the faster of the two. Just keep it together Mav.

In our notes, made whilst watching the race, we scribbled “L7 Origami off T8, AMar retires same lap. Shit Honda”. We doubt Marlow or Shakespeare would be more succinct. Pol retired (understandably) on Lap 24 suffering from his pre-race crash/bruising. Not a single point for Honda. Heads will roll. Bodies with be tied to old Fireblades (you know – the ones that Martin & McGuiness couldn’t race at the IOM TT) and thrown into Tokyo harbour. Suzuka 8 Hrs EWC race is soon; do you think there might be a Fireblade sponsored by Team #Clusterfuck?

KTM? Well, its Brad really. From 17th on the grid, he worked his way up to 9th by mid-race and eventually finished 7th. Teammate Oliveira finished 9th.

*We watch DORMA’s world feed and although we like Matt Birt, he needs to stop becoming a parody of every American sports commentator who ever sat in front of a mic. Yes, he’s knowledgeable, but he’s started missing stuff and overloading on the hyperbole. “……. Blah, blah, something about the shoulder camera – he’s shouldering responsibility for Yamaha now” What?!?!

#GermanGP, humour
Get All Our Latest News Sent Direct To Your Inbox
Join 30,271 other subscribers.
Follow on Social Media
Get the VROOM Podcast
Download our Vroom.GP App