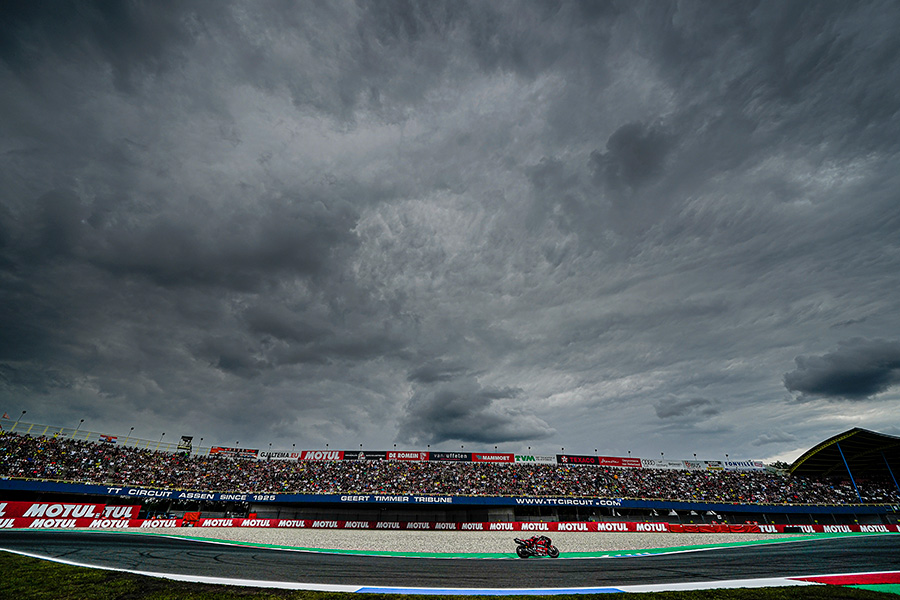 Francesco Bagnaia (Ducati Lenovo Team) has a new all-time lap record to add to his growing collection. The number 63 shaved three tenths off the old in setting the new, and after an eventful Q2 he has key rival – and 2021 Assen winner – Fabio Quartararo (Monster Energy Yamaha MotoGP™) alongside him on the grid for the Motul TT Assen. The first rider through the barrier of the old lap record, Jorge Martin (Prima Pramac Racing), completes the front row.

Q1
It was Miguel Oliveira (Red Bull KTM Factory Racing) and KTM teammate Brad Binder on to move through after the first runs, with some drama for Enea Bastianini (Gresini Racing MotoGP™) as he crawled to a halt at pit exit with an issue. Joan Mir (Team Suzuki Ecstar) then had a tip off at Turn 5, but got back on track to continue.

With a minute and a half left on the clock, Brad Binder turned the tables on his teammate to sit top and by just 0.065. Mir couldn’t quite find enough and ended the session fourth, with Luca Marini (Mooney VR46 Racing Team) pipping the 2020 Champion to line up in P13.

Q2
Martin was on provisional pole after the first flurry, setting a new lap record ahead of Quartararo in second. But Bagnaia headed out and immediately took over by a couple of tenths, laying down the gauntlet once again. Quartararo closed in, but remained second.

Drama then hit for Martin as the number 89 slid out at Turn 5, a slow one but putting a dent in his session – and bring out yellow flags too, cancelling laps for Maverick Viñales (Aprilia Racing) and Alex Rins (Team Suzuki Ecstar). After a crash for Jack Miller (Ducati Lenovo Team) the same complication hit for a few more riders, and then a different one for Quartararo.

On his final attempt the Frenchman had an out-the-seat moment at Turn 5, just able to stay on board but the lap gone. That meant it would be Bagnaia on pole, with fellow challengers unable to improve either as a combination of yellow flags and the simple fact the Italian had scorched in a new lap record keeping him a nice tenth clear on pole.

The Grid
Bagnaia vs Quartararo vs Martin, the latter within only 0.088 of the reigning Champion, makes for a tantalising front row for the Motul TT Assen.

Marco Bezzecchi (Mooney VR46 Racing Team) continued his impressive rookie speed with fourth place, under the lap record and having also gone straight through to Q2, with Aleix Espargaro (Aprilia Racing) looking for more from fifth. Miller lines up sixth, and there was no harm done in his slow off – but there was a little after, as the Ducati rider was slow on line, disturbed Viñales and was given a Long Lap for the race given it’s the second similar incident this season.

Johann Zarco (Prima Pramac Racing) had a more under the radar session but as ever showed some good form with seventh, ahead of Oliveira, Rins and Binder. All three will want more from the race but after a tough run of qualifying in 2022 so far for KTM – usually remedied on race day with some serious comebacks – into Q2 and in the top 10 is solid Saturday step.

Viñales, after some serious speed in Free Practice, will have to start 11th, and Takaaki Nakagami (LCR Honda Idemitsu) lines up in P12.

Mir and Bastianini will be two riders especially eager to charge through once the lights go out, with an especially interesting grid awaiting us on Sunday at the Motul TT Assen. Can Pecco start a comeback before the summer break? Will Quartararo put in another masterclass? Or can someone else take to the top step at the Cathedral?

Jake Dixon took a fabulous Moto2™ pole position in an unbelievably close Q2 at the Motul TT Assen, beating teammate Albert Arenas by 0.011 seconds in a GASGAS 1-2, with Sam Lowes (Elf Marc VDS Racing Team) and Ai Ogura (Idemitsu Honda Team Asia) each only 0.020 seconds in further arrears. Ogura is in prime position, with Championship leader Celestino Vietti (Mooney VR46 Racing Team) only 11th on the grid after a crash and Augusto Fernandez (Red Bull KTM Ajo) down in ninth.

Lowes took over top spot with a 1:36.767 with just over five minutes remaining, before Arenas clocked a 1:36.747 in the final three minutes. Ogura then threatened to take over when he moved onto the provisional front row with a 1:36.787, and that was still the top three with the chequered flag out. But then Dixon shot through to take a second career pole position, completing that incredibly tight top four.

Behind the top quartet comes Alonso Lopez (MB Conveyors Speed Up) on a 1:36.842, with Jorge Navarro (Flexbox HP 40) sixth thanks to his first flying lap time. Joe Roberts (Italtrans Racing Team) is head of the third row despite being only 0.148 seconds off the top, the American set to start seventh, with Dutchman Bo Bendsneyder (Pertamina Mandalika SAG Team) eighth for his home race.

Fernandez will be looking for a way through from ninth, with Marcel Schrötter (Liqui Moly Intact GP) completing the top ten just ahead of Vietti. The Italian was sixth-fastest on a 1:37.085 when he lost the front at Ossebroeken before the halfway mark. and was ultimately shuffled back to 11th.

Some more big news saw Aron Canet (Flexbox HP40), who is fourth in the World Championship for now, withdraw after FP3 due to his broken nose and persistent nosebleeds.

Will we see a new Championship leader by the end of the weekend? Can Dixon become a Moto2™ race winner?

In dry conditions at the TT Circuit Assen, there were only two real contenders for pole as Sasaki vs Suzuki lit up the timing screens. The latter also suffered a crash, rider ok, but that saw him miss out on the chance to reply as Sasaki took over on pole.

Behind the Japanese duo comes Guevara and then Friday’s fastest, David Muñoz (Boe Motorsports), as the impressive rookie continued to be such and heads the second row. Dennis Foggia (Leopard Racing) found some late time to secure fifth, ahead of fellow veteran Jaume Masia (Red Bull KTM Ajo).

So where is Garcia? All the way down in P18, and he has fellow frontrunner Deniz Öncü (Red Bull KTM Tech3) just ahead of him as the two look to make quick progress on Sunday. Can they?