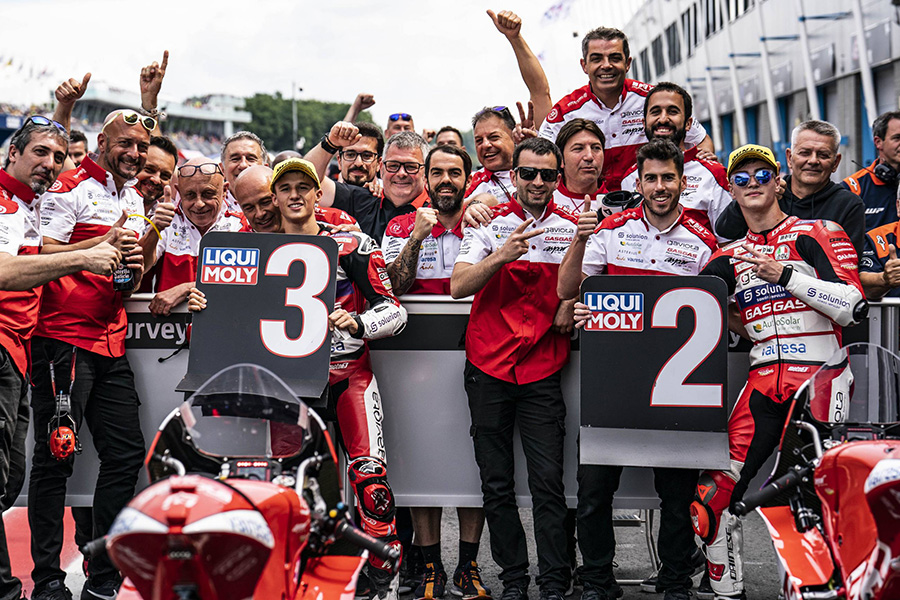 The GASGAS Aspar Team has closed the first half of the season with its job done, with the fourth double podium of the season after Izan Guevara finished second and Sergio García Dols finished third. The result of the Dutch Grand Prix means that the team has achieved 6 wins out of a possible 11 and 14 podiums out of 22. Sergio García Dols leads the riders’ standings with a three-point advantage over his teammate Izan Guevara, while GASGAS is the leading manufacturer with a difference of 54 points over his pursuers. In the team standings, the GASGAS Aspar Team has 152 points more than the second team, more than three races of advantage.

In Assen, Izan Guevara led 19 of the 22 laps, setting the pace of the race and controlling the situation until, in the final laps, Ayumu Sasaki proved stronger than him. In addition, a contact with David Muñoz has taken him back several positions, but a subsequent incident involving Muñoz himself, Jaume Masiá and John McPhee, has allowed Guevara to get to second position at the finish line, 78 thousandths ahead of Sergio García Dols, who has come back fifteen positions today. The Moto3 leader has noticed a lower acceleration on the straights during today’s race, but that has not prevented him from fighting for a new podium, the seventh of the year, which allows him to go on vacation in the lead.

2nd Izan Guevara (+0.314):
“It was a great race for me – I pushed all the way. There was big pace in every single lap and overall, I’m happy to get my sixth consecutive podium and points towards my championship challenge. I’m really happy for the team too – everyone worked very hard and it’s a great way to finish here in Assen before the summer break!”

3rd Sergio García Dols (+0.392):
“Today was a really difficult race – it was really fast – and the pace was really high. I was always on the limit to try to be in the first group. But I pushed really hard until the final corners. I’m happy to get a really good result in the end from this weekend. It’s a great way to finish the first half of the season, and to keep the lead in the championship.”