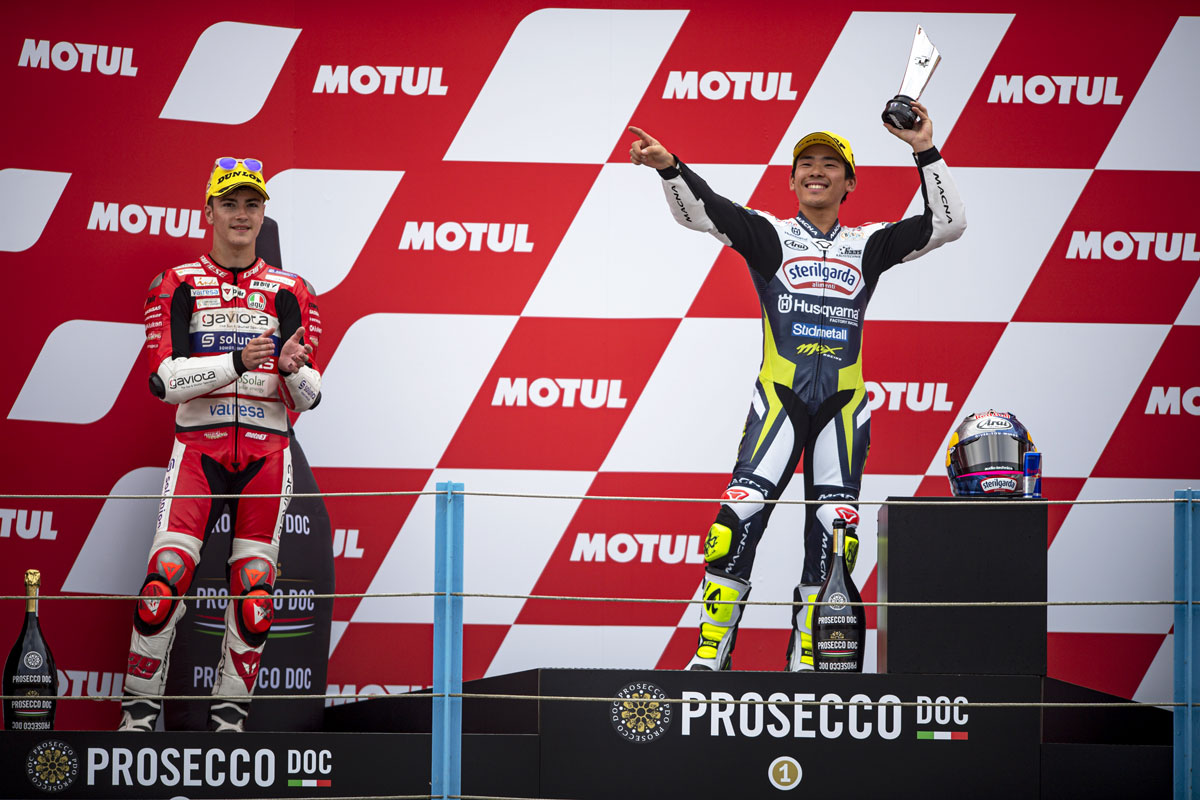 It was a memorable day today at the TT Circuit of Assen. Ayumu got his first victory in Moto3 and did it on the birthday of Team Owner, Max Biaggi.

A perfect day, especially considering that this is only the second race for Ayumu, after the return from injury. In fact, Ayumu missed two races due to a head injury and a fractured collarbone, remedied in free practice at the Italian Grand Prix. Ayumu was simply perfect and even today he showed all his lucidity, even in the most exciting moments of the race. The first winning choice was for the rear tire, as he preferred to use a soft cover.

Ayumu started from pole position, but in the first laps he did not get caught up in the enthusiasm. At the first corner he passed third and, with progression, he increased his pace. On the third lap he was the fastest on track, with the time of 1’42.275 and two laps later he lowered the best time, getting 1’41.497, which is his best lap. The race was a succession of overtakings, in the fast sections and also in the slow ones that the TT Circuit can offer. Ayumu did not make the slightest mistake and with great determination remained in the leading positions, and during the race he never fell below the fourth position. With two laps to go Ayumu exchanged the lead with Guevara and managed to start the last lap first.

During the last lap he lost the lead of the race by a few corners, which he recovered with a decisive overtaking in turn 9. In the last meters he managed to lengthen the pace, thus being able to pass the finish line unchallenged. Thanks to the twenty-five points gained, Ayumu is now fourth in the championship.

AYUMU SASAKI :
“I am very happy with this victory. Today was a very good day, and I had a very good bike. Due to the injury I was out for three weeks, but I kept believing that I could win. The team and everyone supported me in the best way and today I am able to give back to them a result which is amazing. I wanted this win, not only for myself, but mainly for the people who have helped me all this time. I am just so happy, now I have the summer break to recover myself properly and and come back even stronger.”

The weekend could have been even better for John McPhee, with a little more luck. A few corners from the end John was fifth, but unfortunately a slide at Turn 9 denied him a good result, which he would have deserved. The Scottish rider made a different technical choice from that of teammate Ayumu Sasaki and he preferred to use a hard rear tyre. In the first laps he was careful not to make mistakes and to preserve the tyre.

He started eleventh and on the finish line of the first lap he passed seventeenth due to being pushed wide. Hence, he started his spectacular comeback that led him to the fifteenth lap in second position. John was very good at making the tyre work well, and in the last laps he was among the fastest on the track.

On the thirteenth lap, he got the new All Time Lap Record with a time of 1’41.190. This is an incredible performance, which John almost replicated with two laps to go, getting the time of 1’41.269. It’s a real shame that he slipped, as he was so close to taking a great top five position.

JOHN MCPHEE :
“Initially after the race I was very angry about the crash. Afterwards however I thought about how strong we were in the race, in fact we were fast and even got the new All Time Lap Recodr of the TT Circuit of Assen, using the hard rear tyre. As the laps went by, I felt better on the bike and in my comeback I was also in second place. We showed that we were in the fight today for the podium. There are so many positives to take away from the weekend overall. Obviously I am not happy with the way the race ended. I need to say a huge congratulations to the team and to Ayumu for the first victory. I hope the next time we can both be on the podium together.”