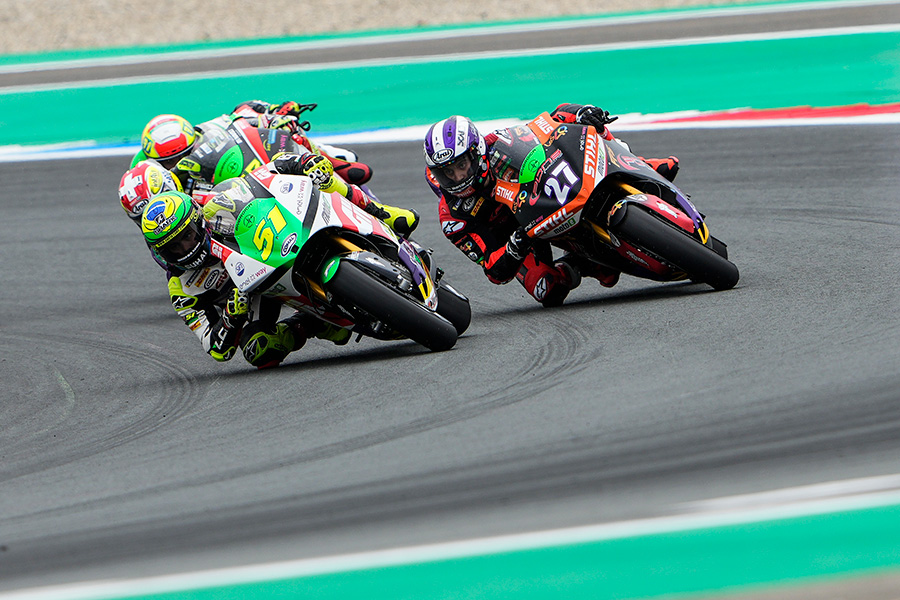 Eric Granado (LCR E-Team) was rewarded for his bravery in tricky conditions as the Brazilian took victory in Race 2 of FIM Enel MotoE™ World Cup at the Motul TT Assen. The number 51 scythed his way from fourth to the lead in just three laps in a contest which would be cut short due a Red Flag, with points leader Dominique Aegerter (Dynavolt Intact GP MotoE™) claiming second and Mattia Casadei (Pons Racing 40) completing the podium.

The Red Flag saw Miquel Pons (LCR E-Team) crash out and suffer contact from Marc Alcoba (Openbank Aspar Team), with the LCR rider conscious and getting a check up at the circuit before heading to local hospital in Groningen for a CT scan to his pelvis.

Before the flag was thrown, however, it was a five-wide run to the first corner when the action finally got underway, with patchy showers having twice delayed the start. Casadei came from fourth on the grid to lead the field into the first corner, while Aegerter fended off an early challenge from Matteo Ferrari (Felo Gresini MotoE™) at Strubben, and then again at De Bult, to end the opening lap in second, with Granado just behind them.

The riders had no time to waste, with the delays seing the originally distance of eight laps cut to six, and Granado was a man on a mission. He passed Ferrari as they turned into Haarbocht at the start of Lap 2 although, in doing so, he made room for Pons to follow him. A brief battle between the LCR duo ensued before Granado shook off his teammate and attacked Aegerter.

Incredibly, as the rain flags flew again, Granado passed Aegerter around the outside of the high-speed Ramshoek left-hander, then went down the inside of Casadei when they arrived at Haarbocht again on Lap 3. Ferrari got back underneath Pons three corners further around at the Ossebroeken complex and, unfortunately, that was just the start of the LCR rider’s troubles.

Exiting the following corner, De Strubben, Pons highsided and was thrown from his motorcycle. Running two bikes back, Marc Alcoba was unable to avoid it and also crashed. Alcoba eventually remounted but, as Pons was initially attended to at the side of the track, the race was red flagged during Lap 4. Soon after news came through it would not restart, and instead half points would be awarded.

In the FIM Enel MotoE™ World Cup standings, Aegerter has now moved to 158 points, but Granado closes in slightly in second on 126.5 points, with Ferrari third but on 112.5. Action in the electric class resumes with the Motorrad Grand Prix von Österreich, at the Red Bull Ring – Spielberg on August 19-21!