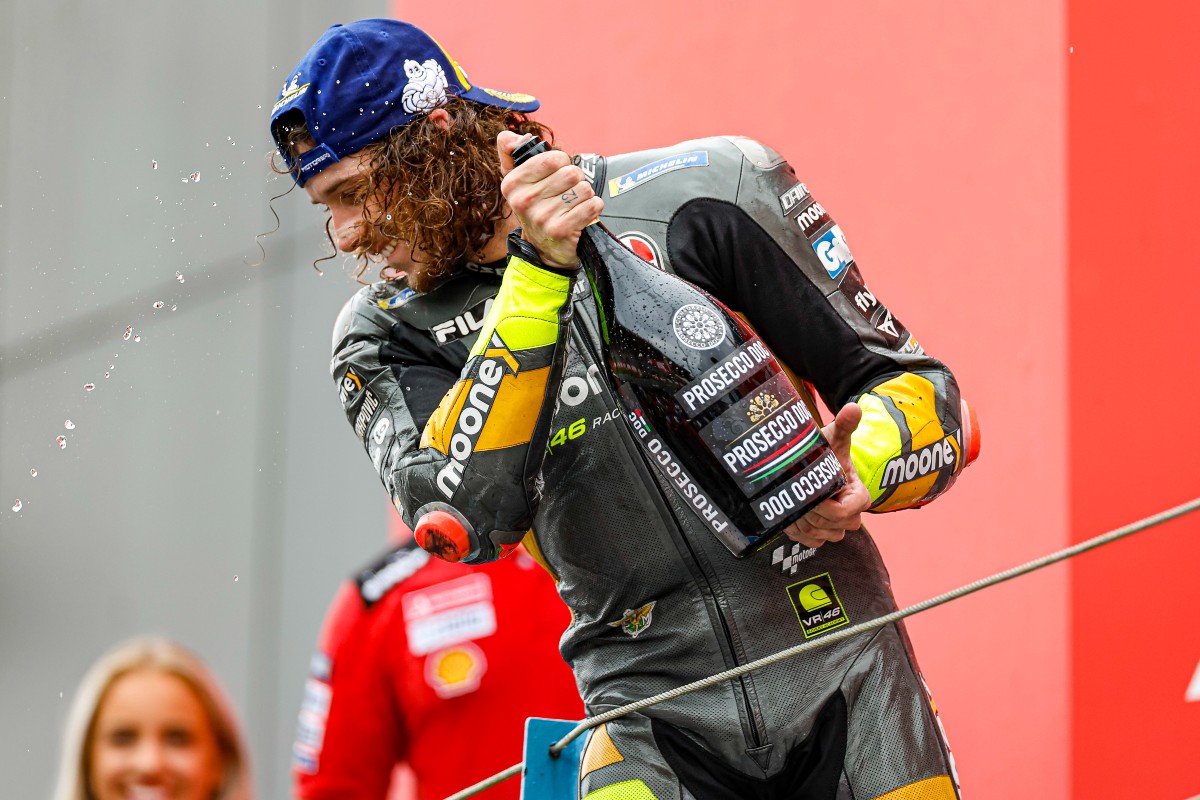 A Sunday full of emotions and a really solid race on the Ducati Desmosedici GP for Marco Bezzecchi, the 46th Italian on the podium in the top class. The rookie of the Mooney VR46 Racing Team crossed the finishing line of Dutch GP in second place, hitting the first podium in MotoGP of his young career and the first in the history of the Team. Race compromised at the start, after a contact that damaged one of the winglets of his bike, for Luca Marini in P17.

Starting from the P4 after an excellent qualifying session and always at ease on the Dutch track in the free practice sessions, Marco kept the contact with the very first ones after the start and moved up to second place after five laps. Capable of a constant and precise race pace, he was second under the chequered flag, first among the rookies. With today’s points, he climbs to P14 in the general standings (55 points) confirming himself as the leader among the rookies.

Step back after a very positive trend in the recent weeks for Luca, 13th yesterday in qualifying and forced to an uphill race after the start due to an accident that damaged his Ducati. He closes outside of the top 15 and is in P15 in the general standings (52 points) on the eve of the summer break and before the British GP scheduled for next August 7th.

Is fantastic! I started well, but not very well, but I got into a fight to get back up with Miller. I wanted to be with the first guys, I felt that I could go very fast because I was fast in all the laps here, a track that I have always liked very much. Then I was close to Quartararo and Espargaro when I saw them touch and the door was open at that point. I said to myself: try to catch up on Pecco (Bagnaia) and let’s see what comes out. I pushed hard and managed to look at who was behind me. I tried to manage the tyre, even if incredibly I still had good grip and the tyre performed well throughout the race. I tried not to make mistakes and when I crossed the finishing line I was over the moon. It goes beyond my dreams, among other things they gave me the flag of Vale, it was incredible, I want to send him a huge hug. Thanks for everything, I would never have been able to get here without you, my family, the Academy, my whole Team and certainly Ducati.

A difficult race, decided immediately at the start. I made my start trying to hold the line, but suddenly I saw Mir. I think his bike has wheelied a bit, it’s not easy to keep the control in those situations, but it was dangerous. I tried to do everything possible to avoid it, we touched each other, fortunately I didn’t crash also because I had several riders behind me. In the collision, I broke one winglets of the bike and from that moment it was impossible to ride. I didn’t want to retire, I tried to cross the finishing line. In any case, we must be happy with this first part of the season: I have a fantastic Team, they are working very hard and they deserve this growth. Today seeing Pecco and Marco on the podium (Bagnaia and Bezzecchi) was great and we will certainly celebrate when we return home. Marco also gave the Team the first podium after a race with an impressive pace.

#DutchGP
Get All Our Latest News Sent Direct To Your Inbox
Join 30,253 other subscribers.
Follow on Social Media
Get the VROOM Podcast
Download our Vroom.GP App