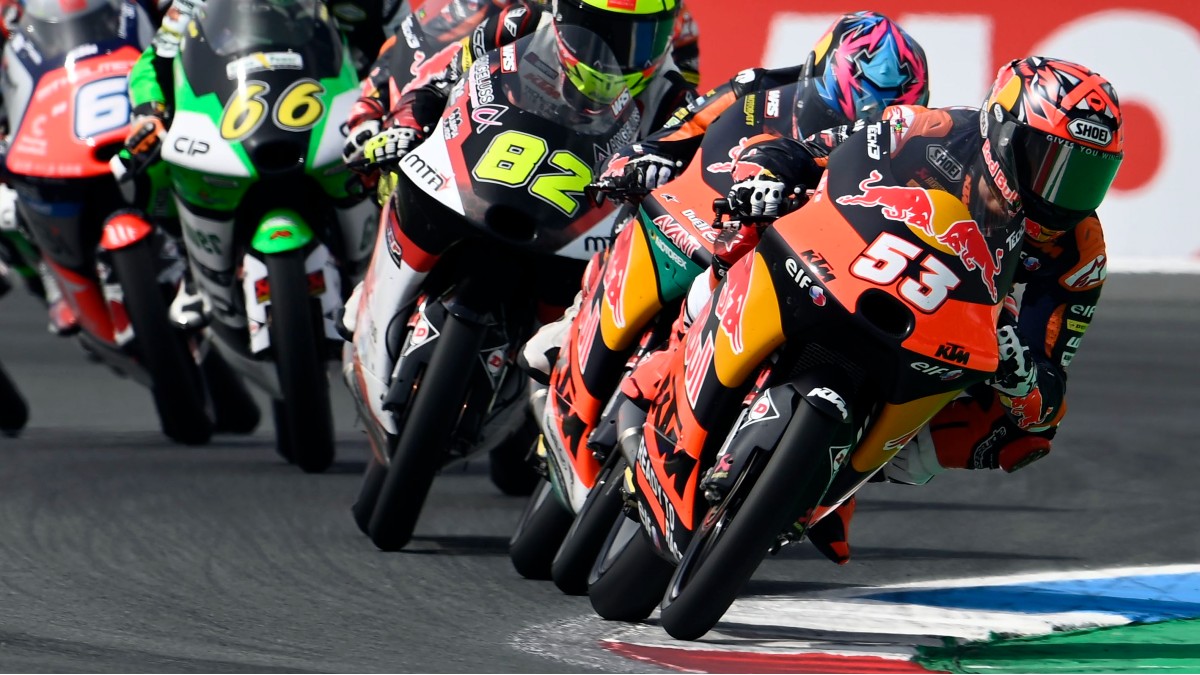 Red Bull KTM Tech3 took the final start of the first half of 2022 today, as the iconic TT Circuit Assen was hosting the Dutch Grand Prix. Everyone was eager to head on holiday on a high note, including riders Adrian Fernandez and Deniz Oncu who were starting from the seventh and seventeenth positions respectively.

Turkish rider Deniz Oncu was once again challenged by his grid position in P17 after an average qualifying day and was set for hard work if he wanted to get in the points again. Still on the lookout for podium success this season, Deniz had to take a good start to the race, which he managed to do as he found himself in P12 with the second group of riders after eight laps. As usual, he provided us with great fights for the good positions, including with teammate Adrian Fernandez, but the pace was not sufficient to be able to catch the leading group. With five laps to go, he attacked more and overtook the number 31 and sat provisionally in P9. He passed the final line in ninth position and grabs another few points in the riders championship.

Adrian Fernandez has taken an extra step over the last couple of races (three top 10 finishes in a row) and continued his progress in Assen with his best qualifying performance on Saturday. Starting from P7 today, he took a solid start to the Dutch Grand Prix and he got himself to fifth position. Not as fast as the leading group but still with a good pace, he settled to the eighth position behind Garcia and Suzuki after the first few laps. A front six of the fastest riders quickly emerged and the Spaniard found himself in the leaders of the second group. He raced well, was aggressive and fought the entire race for the seventh position, but unfortunately, when trying to give his all within the final lap, he lost the front and crashed. A heartbreaking result after a very strong race for the little Fernandez who was in the points again.

Time for a well deserved summer break for the Red Bull KTM Tech3 crew after a very intense first half of 2022. Deniz sits sixth in the riders championship, Adrian eighteenth, and the crew fifth in the teams championship.

The first half of the season comes to an end with a P9 finish in Assen. I started far in the grid and had to push a lot quickly. When I caught back with the second group, there were a lot of fights between riders and I struggled to ride with my pace because you get slowed down by these. It was a disappointing weekend, so we will try to forget it as we head to the summer break. It is time to reset and train hard before the second half of 2022 which will be very intense.

I had a really good start to the race and got myself directly with the front group. Halfway through the race, I lost a bit of time trying to overtake riders and lost the first group. However, I stayed at the front of the second group and continued to fight for the top, but unfortunately, in the final last, I lost the front as I broke quite late, meaning that I crashed. I am disappointed for myself, but also for my team who have worked a lot. We will take the summer break to reset and come back stronger. Thank you to everyone involved for this first half of the season.