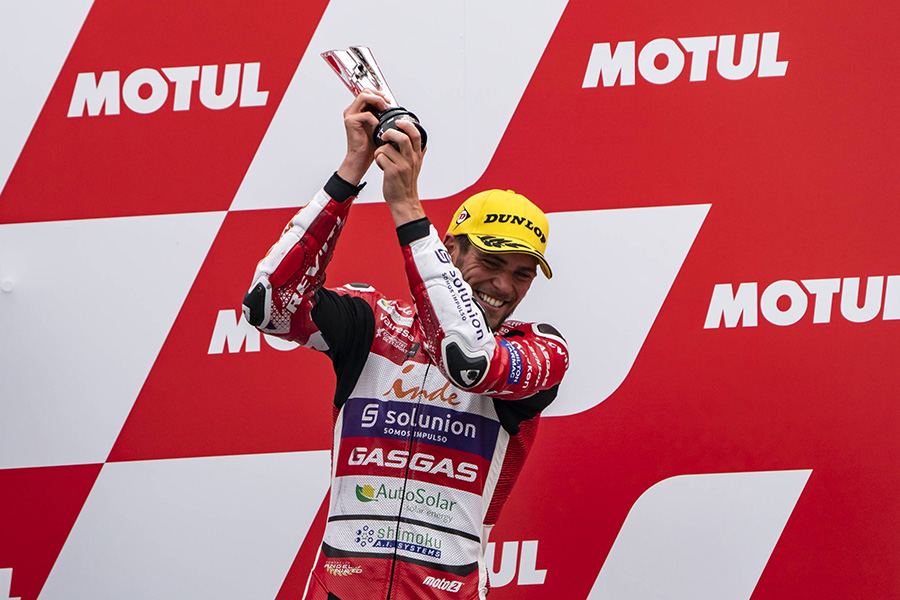 The Inde GASGAS Aspar Team has come back to the podium in the intermediate category, for the first time since the Grand Prix of the Americas, with Jake Dixon. The British rider has finished third in the Dutch Grand Prix after having started from pole at Assen, just ahead of his team-mate. Dixon dropped positions early in the race and was sitting in fifth position. From there, he has gradually recovered ground with the leaders until he crossed the finish line seven tenths off the winner, Augusto Fernández, just behind Japanese Ai Ogura.

Both Dixon and Albert Arenas close the first half of the season in strong form, with a positive trend that has seen them start from the front row of the grid in Assen and fight for the podium. With this third position, Jake Dixon climbs up to eighth place in the general standings. His teammate, however, was unable to add some valuable points after crashing on the penultimate lap, when he was fourth and really close to the podium. Arenas was already stronger than ever: seven days ago he got his best result in the intermediate category, a sixth position, which he could have improved in Assen had it not been for the end of the race. The Inde GASGAS Aspar rider remains fourteenth in the standings.

3rd Jake Dixon (+0.725):
“It was a really strange race at the beginning. The grip levels were worse than at the end; I had a lot more grip at the end of the race. I was trying to bide my time – I got beaten up towards the end a little, but managed to chase my way back. The team gave me a bike good enough to win today but circumstances weren’t quite there. Still, it’s another podium – another third – but my time is coming, and I’m feeling better and better each weekend. Even with a difficult weekend, we are still on the podium… and now a five-week break!”

Albert Arenas (DNF):
“A good weekend where we can draw a lot of positives. I learned a lot again, especially from being with the leaders. Apart from the end result there was much we could take from this GP and certainly enough to stoke the motivation to train hard in the break we have coming up. Honestly, I’m really looking forward to more races.”