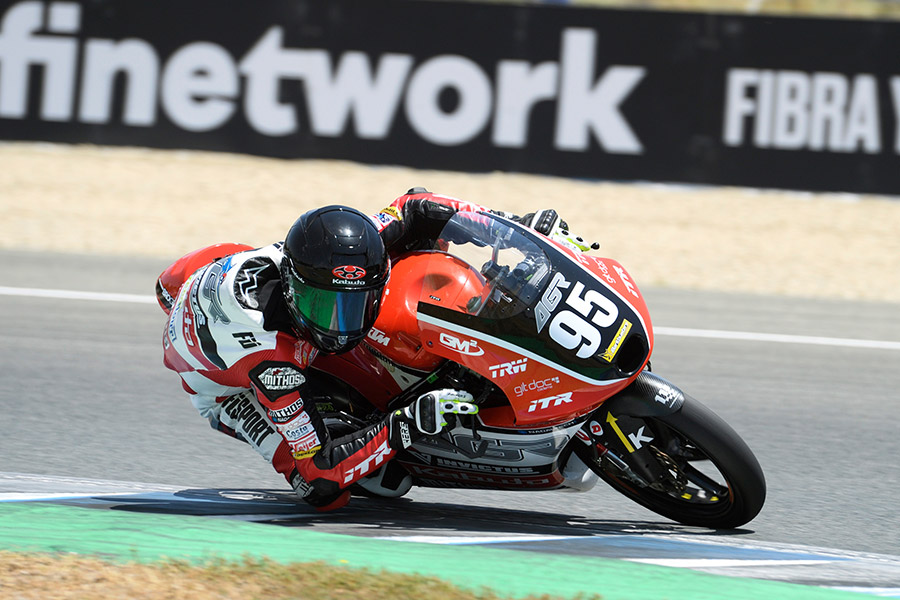 The 2022 Finetwork FIM JuniorGP™ World Championship has arrived at the halfway point of its 25th season of action with the Circuito de Jerez – Angel Nieto hosting Round 4 of the Championship battle. A sunny and scorching Saturday was a prelude to what’s set to be a dramatic Sunday race-day, with qualifying all done and dusted. In the Finetwork FIM JuniorGP™ World Championship, it was Collin Veijer (AGR Team) who conquered pole position, whilst it was Lukas Tulovic (Liqui Moly Intact GP Junior Team) and Maximo Martinez (Team Honda Laglisse) in the Moto2™ European Championship and Hawkers European Talent Cup respectively. All pole times were set in the morning, as temperatures soared in the afternoon.

It was a stunning lap time from Collin Veijer to give the Dutchman a career-first pole position in JuniorGP™; the 17-year-old’s previous best qualifying had been a tenth at the Circuit de Barcelona-Catalunya last time out, with it being back-to-back personal bests, whilst becoming the 44th different pole sitter since Moto3™ machinery was introduced and the first for the Netherlands. Joining him on the front row, Championship leader Jose Antonio Rueda (Team Estrella Galicia 0,0), who aims for a fourth consecutive win from the middle of his fifth straight front row, where he’s always been inside the top two. In third place, it was a career-first front row for Filippo Farioli (Aspar Junior Team), with the top three covered by just 0.096s.

Heading up the second row of the grid, Colombian rider David Alonso (Aspar Junior Team), who was just over a tenth off. Matching his best qualifying of the season, Alonso goes in search of a second victory of 2022 and will be in the battle throughout Sunday. Joining him on the second row in fifth position on the grid, Syarifuddin Azman (SIC Racing), who took a third consecutive top five after qualifying. The Malaysian rider made it five different nationalities at the front of the grid, the first time that’s happened in 2022. Completing the second row, Angel Piqueras (Team Estrella Galicia 0,0), with the Spaniard chasing a first win of his career.

In the Moto2™ ECh class, a red flag in the first session due to track conditions paused action for a short period of time, although come the end of the day, it was Championship leader Lukas Tulovic who took pole, with the German hoping to return to winning ways after two second place finishes last time out. With a first front row of the season, Xavi Cardelus (Promoracing) was just 0.022s away from pole in second, whilst Alex Escrig (Yamaha Philippines Stylobike Team) is on the front row for the second time in 2022 and starts third ahead of Barcelona’s double race winner Senna Agius (Promoracing). Top Stock honours went to Juan Rodriguez (Cuna Campeones).

The Hawkers European Talent Cup action was fierce as ever, with defending title holder Maximo Martinez taking pole by setting the fastest lap time of anyone in the cooler morning temperatures. It’s his second pole at Jerez and his first of the season; last year, he eased to a double win – including a career-first victory – and he’ll hope that he can repeat 2021’s successes again. Second on the grid and with the opportunity to snatch the lead of the Championship, Italian Guido Pini (AC Racing Team) will be aiming for a first win of his career, whilst completing the front is Finnish rider Rico Salmela (Team Estrella Galicia 0,0), who clinched his first front row of the year. Leading the standings, Joel Esteban (Aspar Junior Team) is out with illness, making the HETC a land of opportunity this weekend.

jerez
Get All Our Latest News Sent Direct To Your Inbox
Join 30,242 other subscribers.
Follow on Social Media
Get the VROOM Podcast