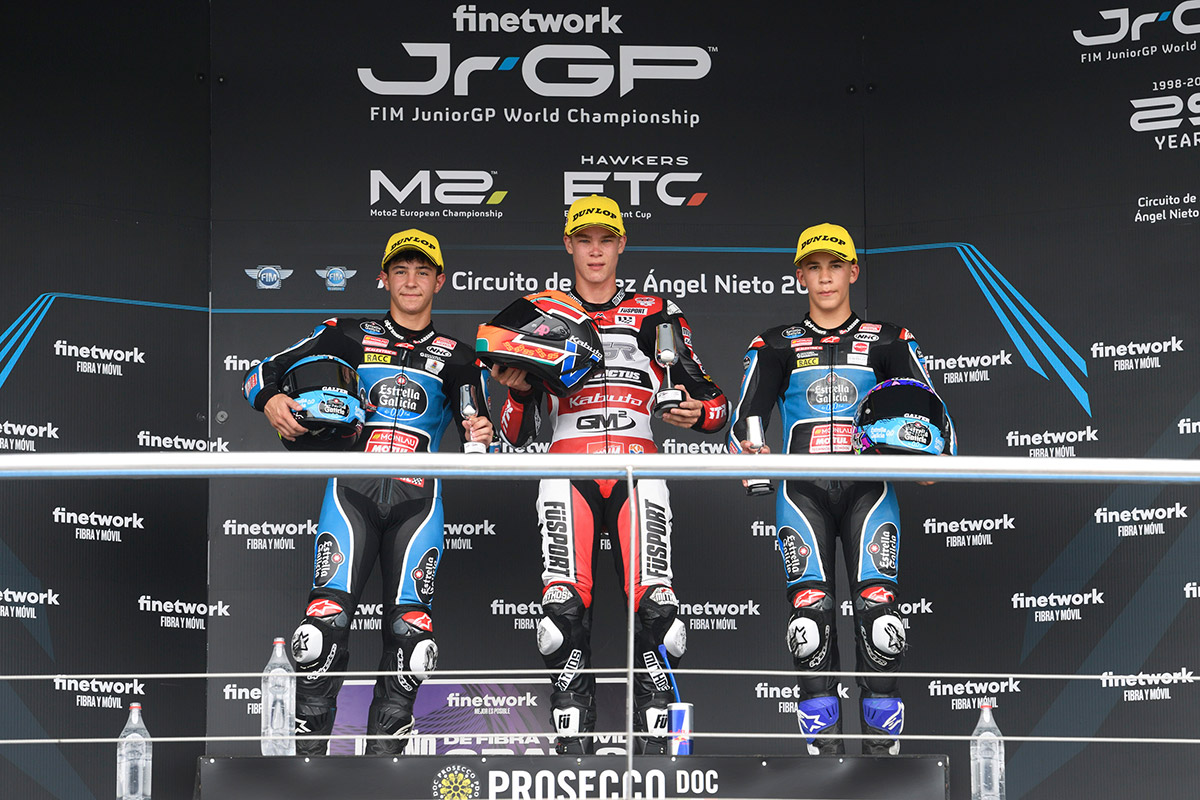 The 2022 Finetwork FIM JuniorGP™ World Championship hosted an incredible day of racing across all three classes at the iconic Circuito de Jerez – Angel Nieto. The Spanish venue welcomed riders and teams for Round 4 of the Championship and the halfway point of the season, where the racing didn’t disappoint. In the Finetwork FIM JuniorGP™ World Championship class, it was a sublime first win for Collin Veijer (AGR Team) in Race 1 before Championship leader Jose Antonio Rueda (Team Estrella Galicia 0,0) struck back in Race 2, whilst it was a career-first win for Alex Escrig (Yamaha Philippines Stylobike Racing Team) in the Moto2™ European Championship and likewise in the Hawkers European Talent Cup as Dodo Boggio (Aspar Junior Team) took a career-first win in Race 1 before doubling up in Race 2.

JuniorGP™ ignited action under what was a cloudy morning at Jerez, although the cooler temperatures gave a thrilling race. A battle between Veijer, Rueda, Angel Piqueras (Team Estrella Galicia 0,0), Syarifuddin Azman (SIC Racing) and David Salvador (Laglisse Academy) soon kicked off, with unpredictability everywhere. In the closing stages, it was Veijer who, after looking continuously strong through the third and fourth sectors, hit the front on the final lap, whilst Salvador crashed out at Turn 11 chasing him down. Rueda couldn’t get through and it was Veijer who took his and the Netherlands’ first victory in the class.

Race 2 beckoned in the afternoon, and it was a mighty performance from Rueda, who in the hotter temperatures, simply cleared off into the distance to win by over eight seconds. However, the race was just as entertaining as the battle for second saw more than ten riders in with a shout. David Alonso (Aspar Junior Team) bounced back after what was a slightly disappointing Race 1 to cross the line second in Race 2, ahead of David Almansa (Finetwork Mir Racing Team) and a mighty Eddie O’Shea (British Talent Team), who was fourth. However, the podium was then investigated and for exceeding track limits, Alonso was demoted to fourth, promoting Almansa and O’Shea to their first podiums – O’Shea came from the fifth row of the grid and made up more than five seconds to catch the riders ahead of him. Jose Antonio Rueda leads the standings by 71 points ahead of Salvador.

The sole Moto2™ ECh encounter was also an intriguing one that wasn’t settled until the very closing stages; a four-rider fight with Alex Escrig grabbing the holeshot from Xavi Cardelus (Promoracing), his teammate Senna Agius and Lukas Tulovic (Liqui Moly Intact GP Junior Team) soon took place, and it wa decided by who managed tyres the best. After mistakes, Tulovic was back in fourth but soon fought back to second ahead of Agius and Cardelus, but nobody could catch Escrig, who became the 32nd different winner in the Moto2™ ECh, clinching a first win. There was late drama as Mattia Rato (MMR) took out teammate Tommaso Marcon at the final corner on the last lap, whilst it was Juan Rodriguez (Cuna Campeones) who took top Stock honours.

The Hawkers ETC races were also electrifying and starting in Race 1, it was dramatic throughout as South African Ruche Moodley (Finetwork Mir Junior Team) got the holeshot before being pegged back in by the likes of Boggio, Brian Uriarte (Team Estrella Galicia 0,0) and poleman Maximo Martinez (Team Honda Laglisse), whilst Hakim Danish (SIC Racing), Rico Salmela (Team Estrella Galicia 0,0) and an impressive Guillem Planques (First Bike Academy &AMP) were all right there too. In a final lap shootout that went to the final corner, Boggio took honour to give Italy a fifth win in the class and to become tenth different winner in Hawkers ETC at Jerez. Guido Pini (AC Racing Team), who was looking to capitalise on the absence of Joel Esteban (Aspar Junior Team) and hit the top of the standings couldn’t do so and only finished eighth.

Race 2 saw a carbon copy of the start as Moodley once again launched off the line but this time, it was a pack of riders jockeying for position. Riders to feature prominently included Casey O’Gorman (VisionTrack Racing Team), Alberto Ferrandez (Finetwork Mir Junior Team) – both of whom came from way outside the top ten – and Amanuel Brinton (Team Estrella Galicia 0,0), who was aiming to bounce back after a double long lap penalty for a jump start in Race 1. Following a hectic final lap, O’Gorman went from third to first at the final corner and held position but was out-dragged to the line by Boggio, who once again came good late-on to take a double. O’Gorman crossed the line second, but the Irishman was demoted to third for exceeding track limits, thus promoting Uriarte to his second second-place of the day. Ferrandez took a well-earned fourth from the fifth row of the grid whilst poleman Martinez was fifth, one place ahead of Brinton in a career-best sixth. The new Championship leader is Boggio by a single point over Esteban.

jerez
Get All Our Latest News Sent Direct To Your Inbox
Join 30,242 other subscribers.
Follow on Social Media
Get the VROOM Podcast