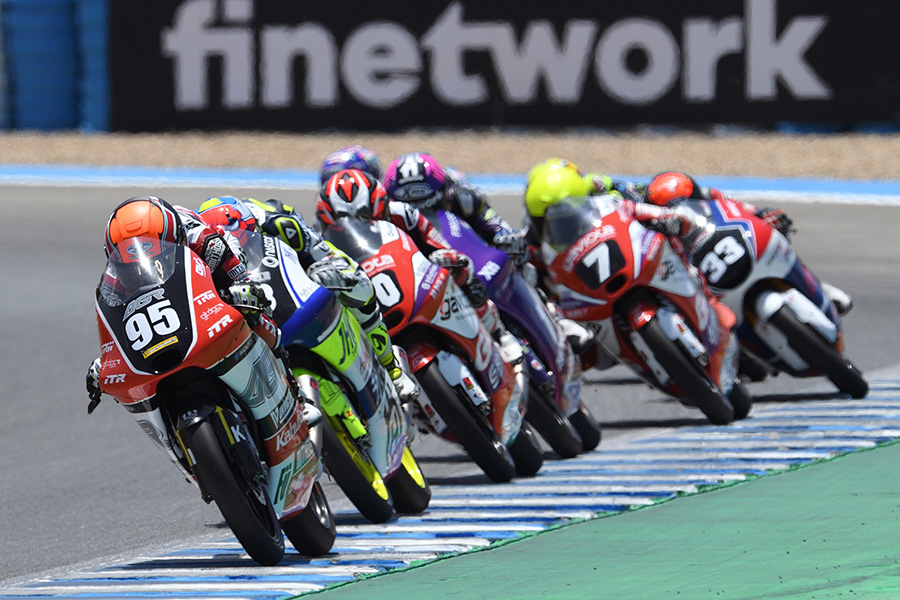 Undulations, exhilaration and elation ahead: who will excel in the hills of the Algarve?

The fifth round of the 2022 Finetwork FIM JuniorGP™ World Championship is on the horizon as the Autodromo Internacional do Algarve awaits. The Portimão venue is always one of the most anticipated on the paddock’s calendar and after a titanic weekend of action at the Circuito de Jerez – Angel Nieto, more dramatic racing is guaranteed. With three first-time winners across all classes at Jerez as well as the Championship battles intensifying, who will conquer the iconic Portimão circuit this weekend?

With four race wins and a 71-point lead, Jose Antonio Rueda (Team Estrella Galicia 0,0) is at the top of the Finetwork FIM JuniorGP™ World Championship standings. Having been beaten in Race 1 at Jerez by Collin Veijer (AGR Team), Rueda won Race 2 and hasn’t finished out of the top four in 2022. He’s won at Portimão earlier this year and was fourth in JuniorGP™ last year and hopes to extend his win streak. Second in the Championship and eager to make up for a Race 1 crash on the final lap at Jerez, David Salvador (Laglisse Academy) continues his quest for a first win. Finishing 22nd in the Moto3™ World Championship race early in the year, he took a top ten last year in JuniorGP™. Completing the top three after a third and an eighth at Jerez, Angel Piqueras (Team Estrella Galicia 0,0), a poleman at Portimão earlier in various classes at the track; he’s a point behind Salvador in the standings.

A point back of Piqueras, Filippo Farioli (Aspar Junior Team) is closing right in on the top three, with just two points covering second to fourth. Despite a front row at Jerez, Farioli couldn’t convert it and the Italian finished fifth and seventh, although he heads to Portimão, where he took his first top ten in qualifying last year. He did leap up to fourth in the standings, thus pushing Malaysian Syarifuddin Azman (SIC Racing) back to fifth. Azman was able to take a fourth at Jerez in Race 1 but was forced off track in Race 2, thus relinquishing points. Azman raced at Portimão in the Moto3™ World Championship earlier in the season and finished 24th, whilst he was eighth in JuniorGP™ last year. Pushed back to sixth, David Alonso (Aspar Junior Team) hopes to be in the fight for victory at Portimão, where he has winning experience at before. Just nine points cover second to sixth, whilst Tatchakorn Buasri (Honda Racing Thailand) is seventh, 18 points behind Alonso.

In the Moto2™ European Championship, the title battle is heating up after a thrilling Jerez. Lukas Tulovic (Liqui Moly Intact GP Junior Team) responded to Senna Agius’ (Promoracing) Barcelona double by extending his Championship lead up to 29 points, finishing second, ahead of Agius in third. Tulovic has a front row at Portimão from 2020 but he’s yet to climb onto the podium at the track. For Agius, he hasn’t scored points at Portimao before but with his 2022 form in the Moto2™ ECh, he’ll be in the mix. Closing both of them in is the third-placed rider in the standings, Alex Escrig (Yamaha Philippines Stylobike Racing Team). Escrig became the 32nd different winner in the Moto2™ ECh class with a stellar victory at Jerez, and now, he’s just 36 points behind Tulovic. With two races this weekend, the last three events at Portimão for the class has seen Race 1’s winner take Race 2, so will we see a double again this weekend? Alex Ruiz (FAU55 Tey Racing) leads the Stock class.

Moving to the Hawkers European Talent Cup, there was a new winner in that class last time out too when Italian Dodo Boggio (Aspar Junior Team) battled to victory in both Race 1 and Race 2. With the fine double, Boggio was able to take the Championship lead from his teammate Joel Esteban, who was out with illness. 14-year-old Boggio was withdrawn from Portimão last year but will be aiming to fight at the front once more to defend his lead in the standings. Teammate Esteban is on the entry lists and ready to reclaim his lead, with him being only a point behind Boggio. He took 11th in the race last year and aims to be right back in the battle for the main positions after missing Jerez. Second going into Jerez but unable to capitalise on a front row start, Guido Pini (AC Racing Team) is closer to the lead overall, just nine points behind fellow countryman Boggio. He’s still searching for a first win and will hope that Portimão can be the place to achieve it.

portimao
Get All Our Latest News Sent Direct To Your Inbox
Join 30,271 other subscribers.
Follow on Social Media
Get the VROOM Podcast