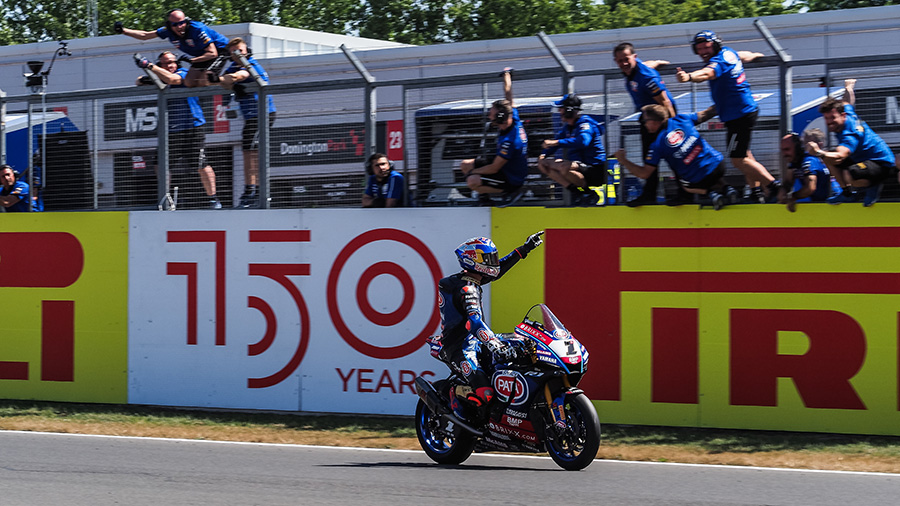 The opening MOTUL FIM Superbike World Championship race of the Prosecco DOC UK Round was a dramatic affair full of battles up and down the grid at Donington Park as reigning Champion Toprak Razgatlioglu (Pata Yamaha with Brixx WorldSBK Team) claimed victory by 6.3 seconds to claim his first full-length race win of the 2022 season. It means Razgatlioglu is now 54 points behind Alvaro Bautista (Aruba.it Racing – Ducati) in the Championship standings following the latter’s retirement.

It’s a move that has been seen a lot throughout 2022 as Razgatlioglu got the holeshot at the start to take the lead of the race and he was able to take advantage of the battling between Jonathan Rea (Kawasaki Racing Team WorldSBK) and teammate Alex Lowes in the early stages, before Rea and Bautista fought each other for second place in the middle stage of the race.

Rea initially got swamped on Lap 1 and dropped to as low as fifth place before fighting his way back up to second place. He first fell behind Bautista on Lap 7 as the pair battled, with Rea making a move on Bautista on Lap 8. Bautista then re-passed Rea on Lap 12 at Turn 9 before Rea responded immediately before making the move stick on Lap 14 at Turn 12. Two laps later, however, Bautista crashed at the same corner and retired from the race; ending his run of 12 consecutive podium.

Razgatlioglu’s victory gave him the 20th of his career and his 64th podium finish in WorldSBK, while it was also Yamaha’s 97th win. Rea claimed his 226th podium and claimed Kawasaki’s 500th podium placement in WorldSBK. In the Championship standings, Rea took 20 points out of Bautista’s lead with the gap now only 16 points, with Razgatlioglu 54 points back.

The battle for third place came down to a shootout between two home heroes as Lowes fought with Scott Redding (BMW Motorrad WorldSBK Team). Redding was ahead until the final handful of laps as the pair battled through the final sector of the race, racing hard through Turns 11 and 12 and into Turn 1 on the next lap, before Lowes got the move done on the exit of Turn 1 and into Turn 2 to secure his first podium of the 2022 season. Lowes ensured Kawasaki immediately moved onto their 501st podium; Lowes’ third place was the 30th podium finish of his career. It was also his first podium since the Superpole Race in the 2021 French Round at Magny-Cours.

Philipp Oettl (Team Goeleven) was 11th on his first race at Donington Park, finishing two seconds clear of Lucas Mahias (Kawasaki Puccetti Racing) in 12th; Mahias securing points on his return from injury. Xavi Vierge (Team HRC) was just a tenth back from Mahias while he was one second clear of wildcard Tarran Mackenzie (McAMS Yamaha) in 14th with the reigning British champion taking points on his WorldSBK debut. British rider Leon Haslam (TPR Team Pedercini Racing) rounded out the points with 15th place.

Stand-in rider Illia Mykhalchyk (BMW Motorrad WorldSBK Team) made a good start to climb up the order but dropped down to 16th place at the end of the race, missing out on points by just 0.244s after the 23-lap race. He was more than seven seconds clear of Hafizh Syahrin (MIE Racing Honda Team) who was only half-a-second clear of fellow rookie Luca Bernardi (BARNI Spark Racing Team) in 18th.
Japanese rider Kohta Nozane (GYTR GRT Yamaha WorldSBK Team) was 19th, just over a second clear of Eugene Laverty (Bonovo Action BMW) and Robert Tamburini (Yamaha Motoxracing WorldSBK Team), with Laverty and Tamburini separated by just 0.085s at the line.

Wildcard Peter Hickman (FHO Racing) was 22nd ahead of Oliver Konig (Orelac Racing VerdNatura) in 23rd; the last of the classified finishers. Leandro Mercado (MIE Racing Honda Team) was the first retirement of the race after he crashed at the Turn 12 hairpin, the final corner of the circuit, on Lap 8. Christophe Ponsson (Gil Motor Sport-Yamaha) was the second retirement of the race as he brought his Yamaha into the pits.

#GBRWorldSBK, donington
Get All Our Latest News Sent Direct To Your Inbox
Join 30,292 other subscribers.
Follow on Social Media
Get the VROOM Podcast