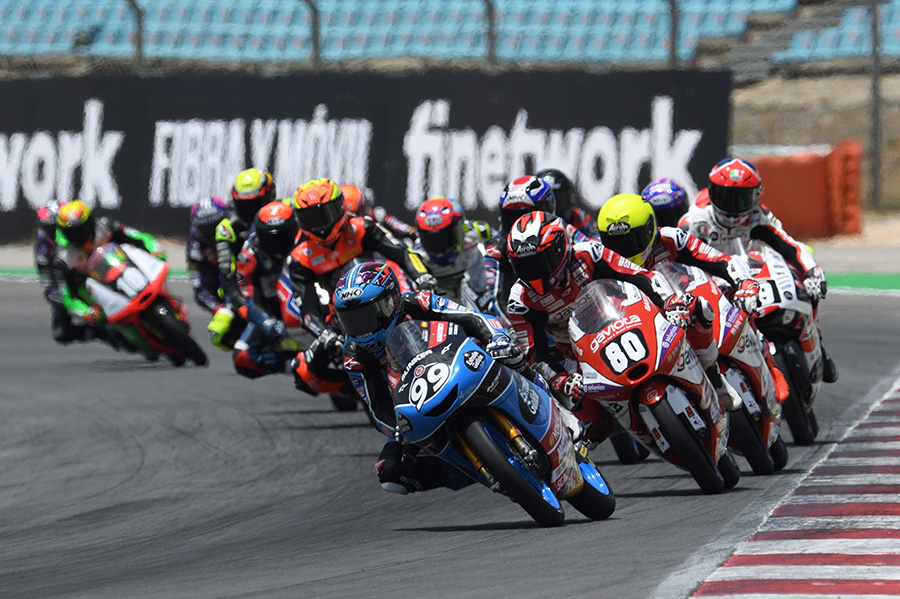 Big-hitters stamp their authority on an action-packed weekend in Portugal as the JuniorGP™ begins the second half of the season.
The Autodromo Internacional do Algarve produced exhilarating action all weekend in every category. The Portuguese circuit hosted the 5th round of the Finetwork FIM JuniorGP™ World Championship, with the round bringing a race each for the JuniorGP™ and Hawkers European Talent Cup classes, and two races for the Moto2™ European Championship. José Antonio Rueda (Team Estrella Galicia 0,0) secured yet another win in the JuniorGP™, whilst Brian Uriarte (Team Estrella Galicia 0,0) took the win in the Hawkers ETC, and the spoils were shared between Alex Escrig (Yamaha Philippines Stylobike Racing Team) and Lukas Tulovic (Liqui Moly Intach GP Junior Team) in the Moto2™ European Championship.

JuniorGP™ saw Adrian Cruces (Cuna de Campeones) start the race from pole position for the first time his career, but it was Syarifuddin Azman (SIC Racing) who took the holeshot into Turn 1 from the middle of the front row. It didn’t take long for José Antonio Rueda (Team Estrella Galicia 0,0) to climb his way up from 6th place on grid into the lead and clear away with the race win out the front. Filipo Farioli (Aspar Junior Team) was determined to cling onto the championship, but it wasn’t to be as a freight-train of riders battled it out for 2nd place. The battle went on all race long until disaster struck on the last lap as three riders collided into Turn 1, causing David Alonso (Aspar Junior Team) and Harrison Voight (SIC 58) to crash out of the race, with Filipo Farioli (Aspar Junior Team) losing time and dropping down to 5th spot. Farioli was later awarded a time penalty of 55 seconds, equivalent to a ride through penalty. This left a depleted battle for second with Syarifuddin Azman (SIC Racing) taking it, and Adrian Cruces (Cuna de Campeones) taking his first podium in 3rd.

The first race of the day for the Moto2™ European Championship saw Lukas Tulovic (Liqui Moly Intact GP Junior Team) take an early lead to the race, but after a series of gear selection mistakes the German was forced to carve his way back through the pack to take second. Trying to capitalise on Tulovic’s mistakes, the rookie sensation Senna Agius (Promoracing) put the hammer down at the front, until he eventually crashed out of the race at Turn 5. It was Alex Escrig (Yamaha Philippines Stylobike Racing Team) who eventually took the win, fending off Tulovic to take back-to-back wins with Xavier Cardelus (Promoracing) rounding out the podium.

It was the usual suspects again in Race 2 with Tulovic taking an early lead to the race and controlling it from the front for the majority of the race. Senna Agius (Promoracing) was on a mission however, and the young Australian fought his way through and put Tulovic to the test with some incredible moves in the closeing stages of the race. A last lap scrap saw Agius dive up the inside of Tulovic at Turn 13, for Tulovic to then steal the win on the line after a superb exit out of the final corner. Alex Escrig (Yamaha Philippines Stylobike Racing Team) was just hanging onto the coattails of the top 2, and brought his Kalex home in 3rd. Dani Muñoz was the winner for Stock class in both races.

The Hawkers European Talent Cup got off to a rough start after poleman Dodó Boggio (Aspar Junior Team) high sided out of the lead on lap 1, causing chaos on the first lap and bringing out the red flags. The restart saw a race-long battle with the front guys which was decided by just 0.006s with Brian Uriarte (Team Estrella Gallicia 0,0) beating Joel Esteban (Aspar Junior Team) to the line. Casey O’Gorman (VisionTrack Racing Team) rounded out the top 3, scoring back-to-back podiums for his 2022 Hawkers ETC campaign.

portimao
Get All Our Latest News Sent Direct To Your Inbox
Join 30,246 other subscribers.
Follow on Social Media
Get the VROOM Podcast