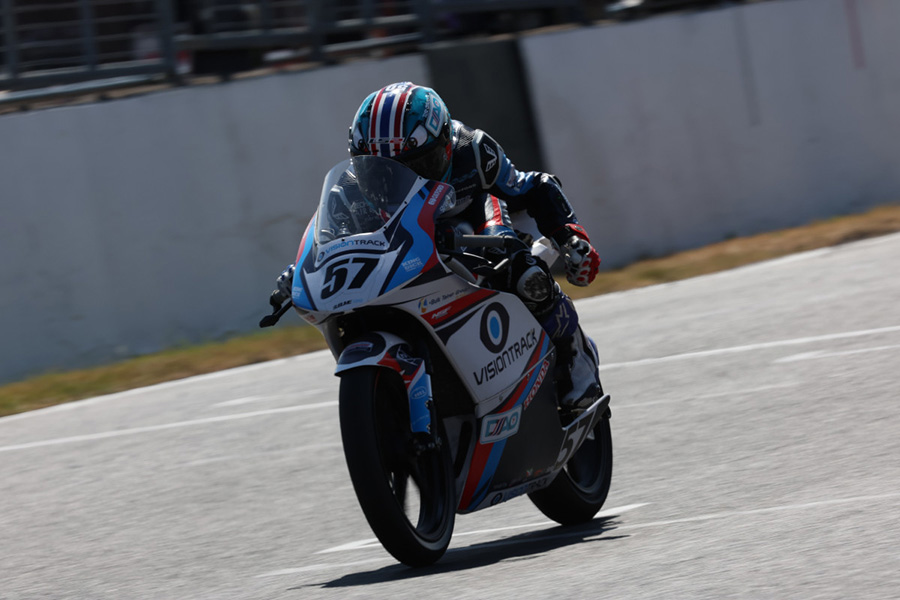 It was an eventful Race 1 in the Honda British Talent Cup at Brands Hatch for the fifth round of the season. Blissfully sunny weather welcomed the riders and teams on track in what would be a red-flagged and shortened first race. However, once the race got back underway it was Johnny Garness (MLav VisionTrack Academy) who made the most of it to take a fifth win of 2022 and to extend his lead in the overall standings.

As the lights went out for the opening encounter, a first lap crash on the exit of Turn 2 for a fast-starting Sullivan Mounsey (Wilson Racing/J&S Racing) after a sudden mechanical problem, the #4 was hit from behind by Harley McCabe (MLav VisionTrack Academy), leading to a multiple rider crash and a red flag. Thankfully, riders involved were OK, although some were taken to the medical centre for a further check-up. Mounsey was declared fit for tomorrow whilst McCabe will be reviewed before Race 2.

After the stoppage period, Race 1 was reduced from 14 laps to ten and with a heavily depleted grid, Johnny Garness grabbed the holeshot ahead of Amanuel Brinton (Mortimer Racing/Victoria House Academy). Both pulled away from the battle behind and ran together for the opening few laps. Everyone got safely through the opening lap but there was drama for Evan Belford (City Lifting by RS Racing); he was forced to start from pitlane but soon re-entered the pits with a clear mechanical problem. He re-joined on Lap 6 to get vital track time.

In the battle for third, Harrison Crosby (Banks Racing) was being pushed hard by Championship contender Carter Brown (MLav VisionTrack Academy), Matthew Ruisbroek (Microlise Cresswell Racing) and Harrison Dessoy (Microlise Cresswell Racing/Eastern Garage Racing). Constant swapping of positions and battling hard, there were plenty of fierce moves being made. However, at the front, Garness had broken clear of wildcard Brinton, who was having a strong ride. However, on the penultimate lap, it was a disaster for Brinton who crashed out at Turn 2 from a safe second.

That left Garness to take a dominant victory, his fifth of the season and extend his points lead to 33. Carter Brown looked like he was going to finish in second place, but he was out-dragged to the line by Harrison Crosby who got second ahead of Brown, whilst fourth place went to Ruisbroek whilst Dessoy completed the top five. Harrison Mackay clinched sixth ahead of Ryan Hitchcock, both separated by less than half a tenth. Rhys Stephenson (Rocket Racing), Lucas Brown (SP125/Amphibian Scaffolding) and Kiyano Veijer (Microlise Cresswell Racing).

Race 2 gets underway on Sunday at Silverstone at 14.05 local time (GMT+1), with everyone ready to do battle once more.

brands hatch
Get All Our Latest News Sent Direct To Your Inbox
Join 30,271 other subscribers.
Follow on Social Media
Get the VROOM Podcast