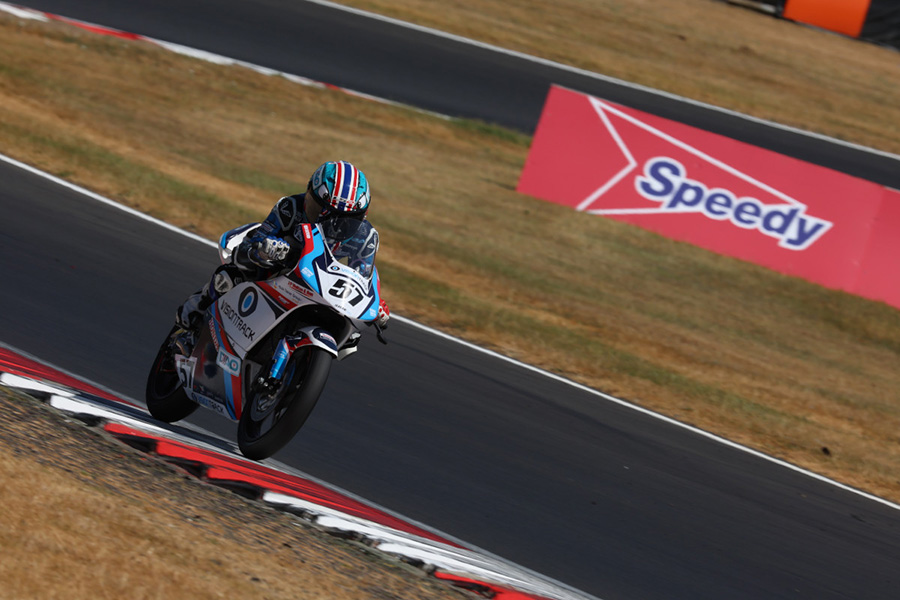 Race 2 of the Honda British Talent Cup’s fifth round of 2022 was another exciting encounter as Brands Hatch served up a treat. Having won Race 1, Johnny Garness (MLav VisionTrack Academy) was once again aiming to extend his lead, but with a chasing pack behind him, it wouldn’t be easy. At the end of the 14 laps, it was Garness who made it a sensational sixth victory and his first double of 2022.

Grabbing the holeshot from pole, Garness made a perfect start ahead of Harrison Dessoy (Microlise Cresswell Racing/Eastern Garage Racing) and Amanuel Brinton (Mortimer Racing/Victoria House Academy), with the three riders making a small breakaway on the first lap. It was a bright start from Kiyano Veijer (Microlise Cresswell Racing) who was up inside the top four before being passed by Harrison Crosby (Banks Racing) by the end of the first lap. Brinton was into second at Turn 1 on Lap 2 following a mistake by Dessoy. However, out front with a lap of around a second advantage, Garness was looking to repeat his Saturday success.

Whilst Brinton chased after Garness, the battle for third was intense between Crosby and Dessoy, although their constant battling saw them more than two seconds adrift of the top two by the end of Lap 3. The battle for fifth was equally as enthralling with Matthew Ruisbroek (Microlise Cresswell Racing), Veijer, Rhys Stephenson (Rocket Racing), Harrison Mackay (Wilson Racing/Super Soco), Lucas Brown (SP125/Amphibian Scaffolding), Ryan Hitchcock (City Lifting by RS Racing) and teammate Evan Belford. After his big opening lap crash in Race 1, Sullivan Mounsey (Wilson Racing/J&S Racing) was impressive as he made up 14 places to be in 13th. Championship contender Carter Brown (MLav VisionTrack Academy) retired at the end of Lap 5 whilst approaching half-race distance, Garness had built up a lead of over four seconds.

Entering the second half of the race, the battle for third took a dramatic twist as Ruisbroek had now got himself in the fight for the rostrum but at the start of Lap 8, he went to launch up the inside at Turn 2 of teammate Dessoy but the two tangled, leaving Dessoy on the ground. After a quick race direction investigation, the incident didn’t result in a penalty, whilst the battle for the final rostrum placing was now a group of seven, with Stephenson at the front with three to go.

There was more drama in the podium positions as second-placed Brinton, in a repeat of his Race 1 tumble, crashed out on the penultimate lap, this time at Turn 4. That promoted Ruisbroek into second and Crosby into third, although Crosby was dropping back rapidly to Evan Belford behind him. Going into the final corner on the final lap, Belford made a bold move and got the job done, pushing Crosby back to fourth.

At the front, it was another victory for Garness, his sixth of the year and his first double of 2022 as he now sports a 58-point lead in the standings. Second place was Ruisbroek who took a second consecutive personal best finish and a first podium of his Honda British Talent Cup career, whilst Belford’s late charge saw him complete the podium. Crosby took fourth whilst Hitchcock rounded out the top five, ahead of Veijer, Lucas Brown, Mackay, Stephenson and Julian Correa (Microlise Creswell Racing), with the American rookie completing the top ten. Mounsey was able to come up to 11th, a fine performance after his Race 1 crash on Saturday. Garness leads by 58 points overall whilst Veijer’s sixth place puts him just one point behind second-placed Carter Brown in the standings.

The next Honda British Talent Cup round will be alongside the MotoGP™ World Championship paddock at the Monster Energy British Grand Prix at the Silverstone Circuit.

brands hatch
Get All Our Latest News Sent Direct To Your Inbox
Join 30,271 other subscribers.
Follow on Social Media
Get the VROOM Podcast