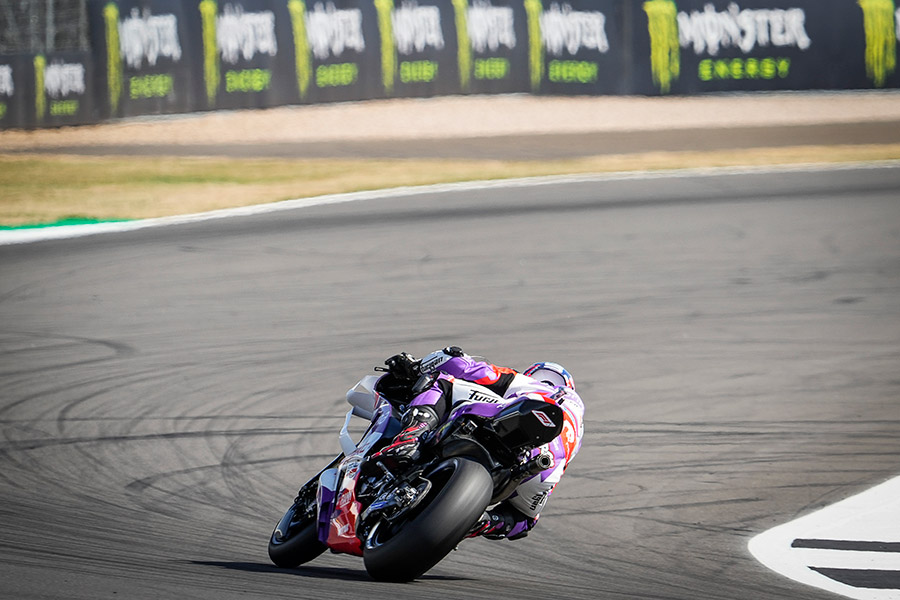 Johann Zarco (Prima Pramac Racing) came out on top after a serious assault on the lap record in Q2 at the Monster Energy British Grand Prix at Silverstone, with the Frenchman putting in a 1:57.767 to just beat Maverick Viñales (Aprilia Racing) by 0.098. Zarco extends his record as the rider with most premier class poles without a win and Viñales takes his first front row with Aprilia, with Jack Miller (Ducati Lenovo Team) completing that front row just another 0.066 back. The front two rows all went under the 1:57 barrier and eight riders beat the 2019 lap record.

Aleix Espargaro (Aprilia Racing) will start from Row 2 after a 1:57 and a stunning salvage job. The Aprilia rider suffered a huge highside  in FP4 at Turn 12 and was sent skywards, given the all clear to continue by the Medical Centre with no fractures but definitely left with a pain barrier to ride through in qualifying and on Sunday.

Q1
Enea Bastianini (Gresini Racing MotoGP™) headed through on top, the Italian not really threatened by the rest in Q1 but the battle behind proving close.

It was Brad Binder (Red Bull KTM Factory Racing) holding onto second until later in the session, but a late lunge from Marco Bezzecchi (Mooney VR46 Racing Team) saw him usurp the South African to move through.

Some early drama unfolded for Alex Marquez (LCR Honda Castrol) in the session as the Spaniard crashed down at the Vale chicane, rider ok but still lead Honda down in P17.

Q2
After his huge highside at Turn 12 in FP4, a bruised Aleix Espargaro was back out on track, meanwhile Martin laid down a quality early banker to edge teammate Zarco by less than a tenth after the first flying laps – meaning a 1:58.377 was the time to beat.

Quartararo did then better that by 0.118s as Miller rose to P2, 0.001s off the Frenchman. Espargaro’s first effort was 1.6s away from Quartararo’s pace, but that was just an exploratory run to see how he was feeling. New tyres were fitted and the number 41 was back out to see how far up the grid he could get.

It was Espargaro’s teammate Viñales who occupied provisional P3 heading into the final five minutes of the session though, with Martin and Zarco shuffled down to P4 and P5, with Alex Rins (Team Suzuki Ecstar) P6 ahead of seventh placed Francesco Bagnaia (Ducati Lenovo Team).

Attention then turned to Aleix Espargaro. Three red sectors resulted in a 1:57.966 – amazingly, a new all-time lap record and a phenomenal attempt. It wasn’t going to be enough for pole position, however, as a flurry of rapid times were about to come in. Quartararo briefly returned to P1 before Miller then bettered the Yamaha rider, but then came Zarco. He took over and the lap held firm as it wasn’t beaten by Bagnaia, who slotted into P4.

The last rider to cross the line on a flying lap was Viñales and it was a belter. Top Gun’s 1:57.865 was enough to shoot him up to second place, earning the Spaniard his best qualifying result with Aprilia and his first front row since claiming pole at the 2021 Dutch TT.

The Grid
Zarco’s new all-time lap record gives the man third in the World Championship chase his second pole of the season, ahead of Viñales and Miller. Quartararo will be praying for a great getaway from P4 as he faces the much-talked-about Long Lap penalty on Sunday afternoon, as three key title contenders line up on the second row: Bagnaia starts P5, Aleix Espargaro starts P6.

After coming through Q1, Bezzecchi starts seventh ahead of fellow Q1 graduate Bastianini – amazingly, both of the Ducati riders were under Marc Marquez’s (Repsol Honda Team) old lap record at Silverstone too. That’s just how competitive MotoGP™ is in 2022!

Martin has to settle for P9 despite being less than half a second away from pole, as Luca Marini (Mooney VR46 Racing Team), Rins and Joan Mir (Team Suzuki Ecstar) round out the Q2 places in P10, P11 and P12 respectively.

Augusto Fernandez (Red Bull KTM Ajo) took his second career pole position at the Monster Energy British Grand Prix, just holding off Joe Roberts (Italtrans Racing Team) by 0.034 after a close Q2 on Saturday. Ai Ogura (Idemitsu Honda Team Asia), who trails Fernandez by a single point in the standings, lines up third for what promises to be a classic intermediate class race at Silverstone.

Q2
It was Fernandez vs Jake Dixon (GASGAS Aspar Team) for much of practice but that duel couldn’t quite materialise in qualifying as the Brit took a tumble – rider perfectly ok and rejoining – but not then able to push for pole. Fernandez, however, kept it almost pitch perfect to take to the top, back on pole for the first time since the 2019 Catalan GP and for only the second time so far.

Roberts gave it a good go and got within 0.034, but the American is forced to settle for second ahead of Ogura as the Japanese rider joins fellow Championship challenger Fernandez on the front row.

Albert Arenas (GASGAS Aspar Team) takes fourth ahead of Celestino Vietti (Mooney VR46 Racing Team) as the latter pushes to hold onto that moniker on Sunday, also facing down a Long Lap penalty as Fernandez and Ogura line up ahead of him. Dixon completes Row 2, well in the right postcode to push for a home podium.

That race day is a little later for the intermediate class at Silverstone, with lights out at 14:30 (GMT +1)

Diogo Moreira (MT Helmets – MSI) became the first Brazilian rider to take pole position in the lightweight class on Saturday at the Monster Energy British Grand Prix, the rookie riding the venue for the very first time and getting the better of Championship challenger Izan Guevara (Gaviota GASGAS Aspar Team) by just 0.068. Ryusei Yamanaka made it both MT Helmets – MSI riders on the front row as he took third, and the Japanese rider was still within 0.078 of pole as the margins proved small despite the expanse of Silverstone Circuit.

Q2
After the first runs it was Moreira on top already, and despite a Leopard Racing freight train of Tatsuki Suzuki and Dennis Foggia giving it a shot, and no one could topple the Brazilian on take two either. So the rookie keeps pole ahead of Championship challenger Guevara, with Yamanaka on the heels of the Leopard train and coming through to take third.

Rossi holds fourth after topping Q1, ahead of Stefano Nepa (Angeluss MTA Team) in fifth and Deniz Öncü (Red Bull KTM Tech 3) in sixth as the Turk looks to extend his streak as the only rider to score in every race so far in 2022.

Behind them, Championship leader Garcia faces a fight back from P11 and will be looking for more on Sunday, with teammate Guevara perfectly poised to attack that points lead. Can the number 11 hit back?

The lights go out for the lightweight class at the slightly later time of 11:20 (GMT +1) on Sunday.