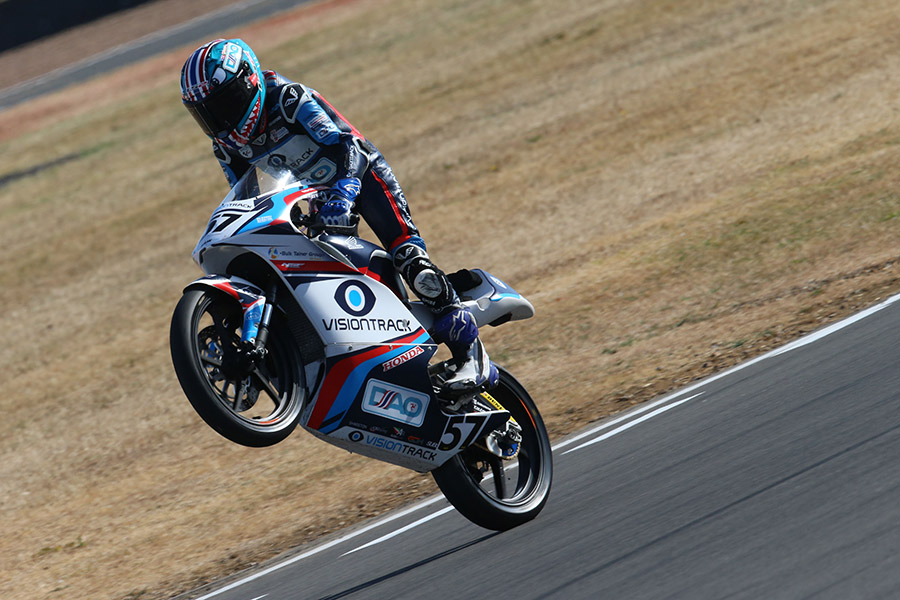 On the biggest stage of the year for the Honda British Talent Cup, Johnny Garness (MLav VisionTrack Academy) put in a showstopper in Race 1, duelling Rhys Stephenson (Rocket Racing) early doors before pulling away to take the chequered flag nearly eight seconds clear. Stephenson impressed to take second as the only challenger to the number 57 early on, with Harley McCabe (MLav VisionTrack Academy) winning the group fight to complete the podium as he took P3.

Garness got a good start from pole – a pole that had put him a cool 1.6 seconds clear – and shot off into the lead after lights out. After getting past Evan Belford (City Lifting by RS Racing), only Stephenson could initially stay in touch with the points leader, slowly reeling him back in over a number of laps. The number 23 also tried his luck at getting past but wasn’t able to keep up the challenge as the laps ticked down, eventually forced to settle for a nevertheless impressive P2. Garness just kept the hammer down, and by the time he rolled round to meet the chequered flag it was 7.946 seconds of clear air behind him as the number 57 took another impressive win.

Behind that duo, it was a classic group fight and split by tiny margins over the line. Carter Brown (MLav VisionTrack Academy) was mired in it as his teammate – and key Cup rival – disappeared at the front, and mere hundredths decided the final place on the podium. Three-wide across the line, was McCabe who pipped them all to take P3, with Harrison Dessoy (Microlise Cresswell Racing/Eastern Garage Racing) fourth and Brown forced to settle for fifth after leading the battle for much of the final lap.

Lucas Brown (SP125/Amphibian Scaffolding) followed his namesake home for an impressive top six, ahead of Matthew Ruisbroek (Microlise Cresswell Racing) and Sullivan Mounsey (Wilson Racing/J&S Racing) in another tight trio. Completing the top ten, Harrison Crosby (Banks Racing) just beat Clayton Edmunds (MJL Racing) to the line as the two were the last in touch with the freight train, Edmunds having run as high as third earlier in the race.

After a good start, Belford later crashed out, and will be looking for more on Sunday.

#BritishGP
Get All Our Latest News Sent Direct To Your Inbox
Join 30,292 other subscribers.
Follow on Social Media
Get the VROOM Podcast