Damage limitation by Dovizioso and Binder in Great Britain 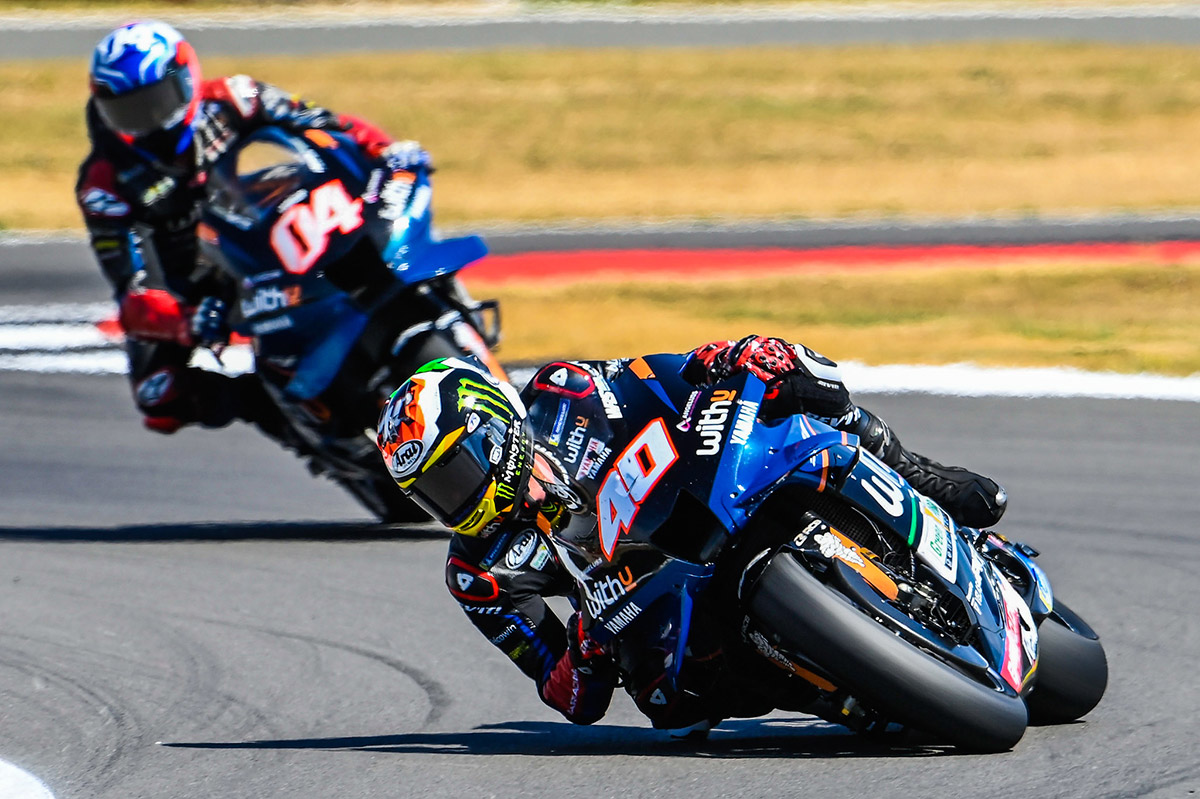 Like the entire weekend of the British Grand Prix, sunshine accompanied the racing circus on its comeback from the summer break on race day as well. Thereby, the WithU Yamaha RNF MotoGP Team duo of Andrea Dovizioso and Darryn Binder both made up ground in the 20 laps race at the longest circuit of the calendar.

Dovizioso, who started in P24 came of a decent start to make up three positions in the first sector of the first lap. Just from halfway through the race, the Italian found some decent speed and was shortly nearly as fast as the top guys, whereby he passed his teammate for P19 and from there moved up further in the order with five laps to go. With two laps remaining on the board, he went up to 17th and caught Alex Marquez on the final lap to eventually finish in 16th, just missing out on the points.

On the other hand, rookie Binder, who missed out on some practice time due to two crashes this weekend had a tough race. Starting from P23 on the grid, he found himself in 18th at the end of the first lap, but lost one position again some laps later. When his teammate overtook him, the young South African couldn’t quite match his pace and eventually went back to P20. Nevertheless, he kept his top 20 position to the flag and gained a lot of experience in England.

“At the end, we took a bit of a gamble, because we used the hard rear, that we never tried before. But it was the right choice, I think. It was a bit difficult for me at the beginning, because I didn’t try the tyre before, so I couldn’t get up to speed easily and I was not able to use the potential of the bike in the first part of the race. But at the end, I was trying to save the tyre and it was working, I could be consistent until the last lap and that gave me the possibility to make up some positions. Unfortunately, I didn’t get any points, which was our target, but it was very close. But starting from P24 was difficult and with the Qualifying we did to eventually finish in P16 with 20 seconds to the top is a bit better than in the other races.”

“I’m glad to get the first race of the second half of the season done and dusted and see the chequered flag. After Warm Up this morning, I realised that it was going to be a tricky race towards the end. I went with the medium rear, I tried riding the hard during FP2 on Friday but unfortunately I couldn’t bring it up to temperature and i didn’t feel comfortable riding it, so I felt much more confident on the medium and I went for that. My riding style has always been trying to gain as many positions as I can from the very beginning, I had quite a good pace at the start but the last five laps, I suffered as I didn’t have the rear tyre anymore. I’ve got a starting point that I can build on from here on now and just keep improving for the rest of the season.”

#BritishGP
Get All Our Latest News Sent Direct To Your Inbox
Join 30,271 other subscribers.
Follow on Social Media
Get the VROOM Podcast
Download our Vroom.GP App