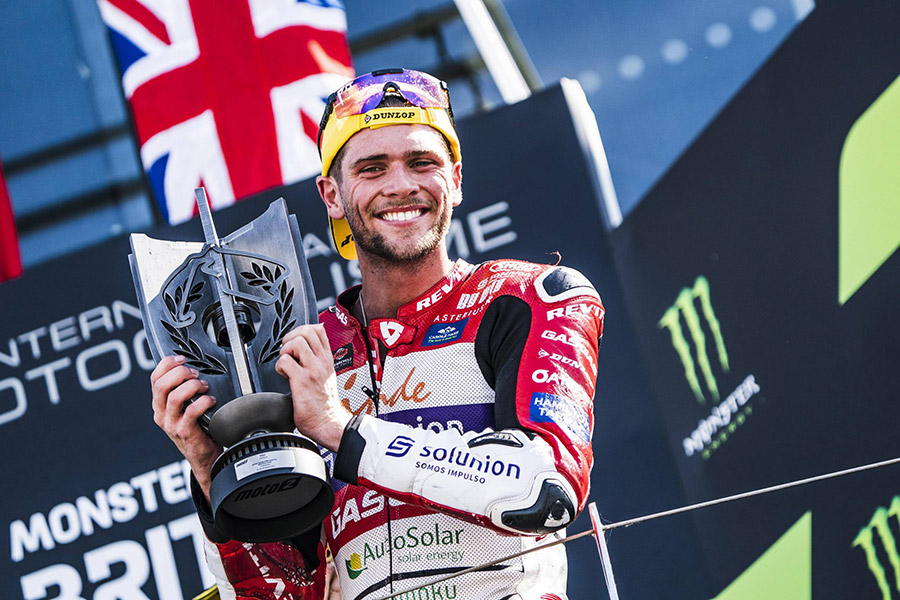 The Inde GASGAS Aspar has achieved its third podium of the season in the intermediate category with a splendid performance from Jake Dixon, who has not given up even when he was one second off the group.

The British rider was racing at home, starting from the second row of the grid and he knew that this was a great opportunity to shine in front of his fans. Dixon started with confidence, but in the early stages of the race he lost a few meters with respect to the leader, which later made it difficult for him to fight for victory. Despite everything, he continued to push until the end, overtaking rivals who are better positioned in the championship standings, to achieve a new third position.

Teammate Albert Arenas started today from fourth place on the grid, but from the beginning of the race he saw that the pace was much higher than expected. Despite everything, Arenas has not given up and has continued to fight with the leading group until he was unable to avoid a crash that ended his options. With these results, Jake Dixon climbs to seventh place overall, 79 points behind the leader, while Albert Arenas is fifteenth. The next race for the Inde GASGAS Aspar will be the weekend of August, 21 in Austria.

3rd Jake Dixon (+0.662):
“Words can’t describe it! I know it’s only a third place but this really feels like a victory! Especially from where I came from at the beginning of the race, to where I was at the end. It feels so amazing, the crowd has been absolutely awesome – I can’t thank them all enough for their support. As they could see – I fought until the very end, and I fought like a lion. I was never going to give up; and I gave everything I could.”

Albert Arenas (DNF):
“A fast race from the beginning but I was able to get into the group going for the win. It wasn’t my day today. I don’t think we were quite ready to carry that pace but I decided to go for it anyway until I went just over the limit. I couldn’t avoid the crash. We’ll continue with the same ambition to try and win and chase success. We’ll see what we can improve to be more in with a chance of the podium. We’re close.”

#BritishGP
Get All Our Latest News Sent Direct To Your Inbox
Join 30,253 other subscribers.
Follow on Social Media
Get the VROOM Podcast