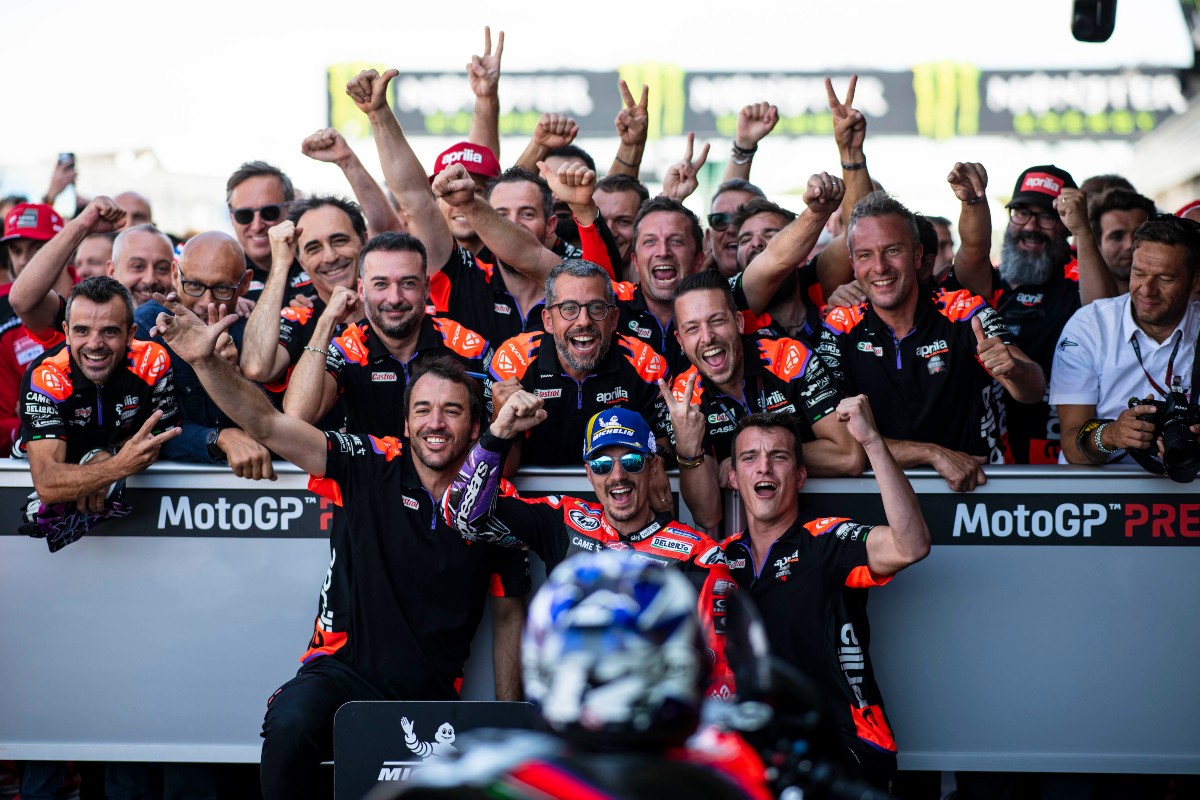 The comeback ride, the final recovery, the overtaking, and the second consecutive podium: there is much to celebrate in the Aprilia camp which, with Maverick Viñales in Silverstone took their umpteenth great result of this incredible season.

After starting from the front row, Maverick lost a few positions at the start and in the frenetic opening laps. Staying focused, he began his comeback with times that improved lap by lap. When the grand finale came, he caught up with the leader and attempted to overtake for the win but all his efforts had taken a toll on the tyres and there was no margin for an even more significant result. The second-place finish, his second podium in a row after his third place in Assen, is confirmation of how the Aprilia-Viñales duo can now be considered one of the protagonists of the championship.

Aleix had to reckon once again today with the painful injuries from his terrible high side yesterday. In pain, but able to participate in the race, he was unable to push to his full potential but, also aided by a bland performance by his direct rival Quartararo, he is still in the running for the championship title. In fact, he even attempted to overtake the championship leader on the final lap. He was unable to make it stick, but it was a huge sign of the great grit Espargaró took onto the track today, a true hero of the weekend.

I tried my best all the way to the end! Unfortunately, I lost a bit of time in the battle during the opening laps, but then to recover I stressed the tyres a lot and didn’t have anything left in the finale. Bagnaia was good at closing the door when I overtook him. On a couple of corners I lost the rear trying to catch up and that’s where the race was decided. In any case, I’m happy. I’m riding well and in harmony with the Aprilia an we are reaching the level we’ve been aiming for. We’re almost there. We’ll keep trying even as early as the next race. We deserve it!

I felt rather good in the race and didn’t have too much pain, but I also wasn’t able to move on the bike comfortably and be aggressive. That meant I wasn’t able to overtake. I didn’t make even one pass all race and that was a determining factor where the result was concerned. In any case, I don’t want to make excuses. The crash obviously didn’t help in terms of confidence, but we weren’t able to be as fast as we wanted to be today. I didn’t have much traction, especially on the right side and I was unable to maintain the pace of the leaders. It’s a pity because we had demonstrated good potential in practice. That said, we lost almost nothing in the standings. The championship is still wide open and the final part of the season will definitely be interesting!

#BritishGP
Get All Our Latest News Sent Direct To Your Inbox
Join 30,253 other subscribers.
Follow on Social Media
Get the VROOM Podcast