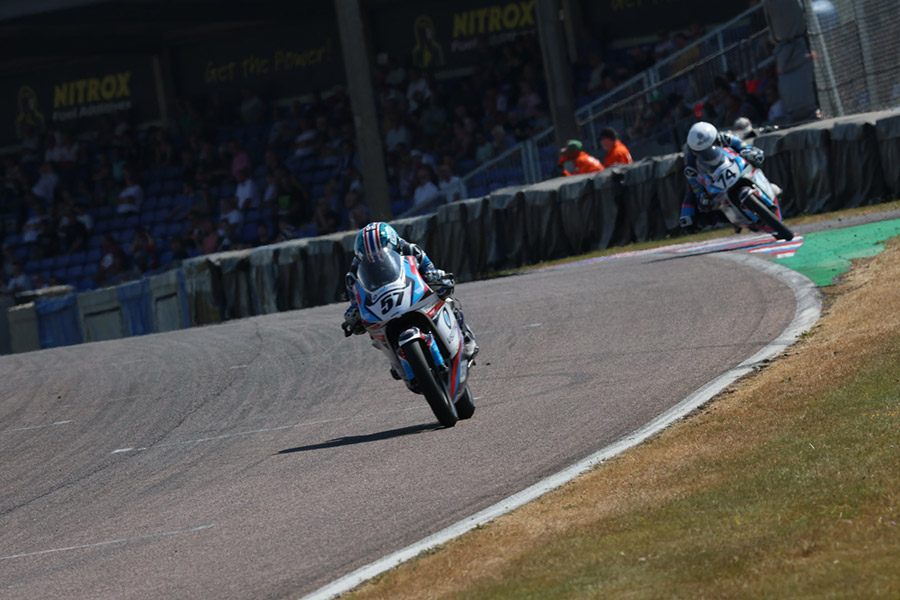 Johnny Garness (MLav VisionTrack Academy) has done it again, and his win in Race 1 at Thruxton not only keeps his roll going, but also gives the number 57 his first shot at the crown on Sunday. Now 89 points clear of teammate Carter Brown, he needs to make that 100 or more by the end of Race 2 to become the 2022 Honda British Talent Cup Champion. Brown is now his only rival.

Garness’ performance in Race 1 says it can’t be counted out either as he escaped after an early duel against Silverstone sparring partner Rhys Stephenson (Rocket Racing), with Brown then moving through to third and able to catch and pass the number 23 for second. Can Garness’ sole rival for the Cup repeat that on Sunday?

Off the line on Saturday though, Garness converted pole by well over a second into the holeshot and started to get the hammer down, with Stephenson once again the only rider with any real challenge early on. And the number 23 did manage to hit the front after only a handful of laps, but it was shortlived as Garness hit back and then didn’t look back, escaping into the lead.

The focus then shifted to Brown as the number 74 was reeling Stephenson in, and once past he also started to take chunks out of Garness’ lead. But heading wide and then running out of laps saw him forced to take second by just over two seconds, with Stephenson completing the podium.

Behind the podium fight there was a huge battle for fourth between Matthew Ruisbroek (Microlise Cresswell Racing), Harrison Crosby (Banks Racing), Evan Belford (City Lifting by RS Racing) and Amanuel Brinton (Mortimer Racing /Victoria House Racing Academy), with positions chopping and changing throughout. It went down to the final chicane and then the drag to the line, with just 0.166 splitting the four over the line. In the end, Ruisbroek took it ahead of Crosby and Brinton, with Belford forced to settle for seventh.

It’s been a tougher round so far for Microlise Cresswell Racing as Kiyano Veijer broke his foot in practice and is sidelined, and there was contact early on between Harrison Dessoy and Julian Correa in Race 1 putting a dent in their day.

That’s a wrap on Saturday, and the spotlight heading into Sunday stays firmly on Garness as he faces down his first match point. Can he get it done or has Brown got a final stand left in the locker?

thruxton
Get All Our Latest News Sent Direct To Your Inbox
Join 30,271 other subscribers.
Follow on Social Media
Get the VROOM Podcast
Download our Vroom.GP App