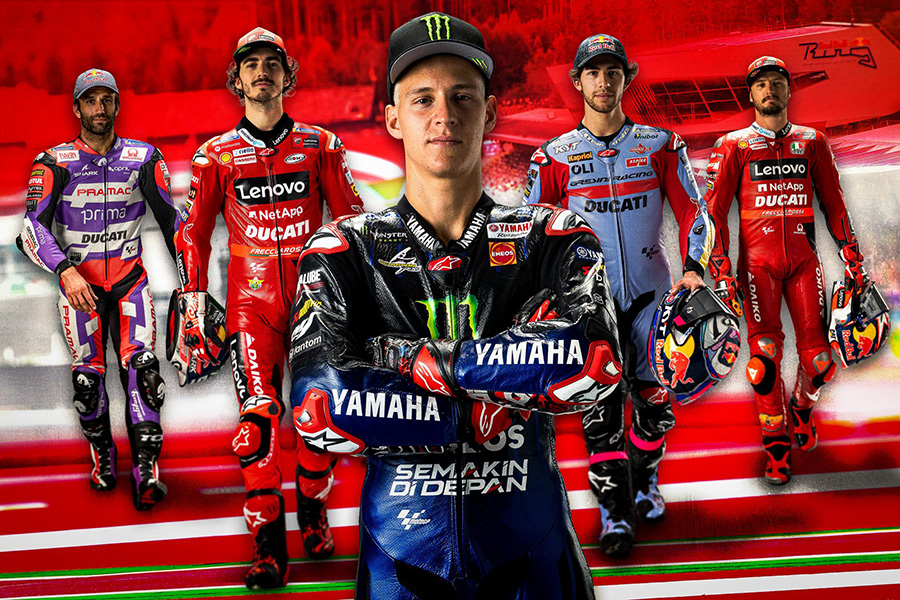 A few races ago, Fabio Quartararo (Monster Energy Yamaha MotoGP™) was starting to become the runaway favourite for the 2022 crown, but since his error at Assen and then a tougher race at Silverstone, both of which were won by Francesco Bagnaia (Ducati Lenovo Team), the momentum has most definitely turned. Now the paddock heads to the Red Bull Ring and serious winning turf for Ducati, it could be another pivotal chance for Bagnaia to continue cutting that gap – especially as it’s often been tougher Sunday turf for Yamaha.

There is a new chicane to contend with, however, and that leaves lap records behind and adds an extra challenge to the weekend ahead. Still, the venue has seen many a Ducati win and for a handful of different riders, so the factory remains the favourite. With Bagnaia on form, teammate Jack Miller fresh from the podium, Jorge Martin (Prima Pramac Racing) already a winner at the track and Enea Bastianini (Gresini Racing MotoGP™) back up into the battle at Silverstone, there is a long list of hopefuls and it doesn’t even stop there, with the likes of Johann Zarco (Prima Pramac Racing) and Marco Bezzecchi (Mooney VR46 Racing Team) likewise quick and eager to make their mark.

Another factory eager to keep the pressure on Quartararo is Aprilia. Aleix Espargaro didn’t manage to capitalise on the number 20’s P8 at Silverstone as he took ninth, but after a huge highside on Saturday left him racing with a broken heel, that became a job well done in difficult circumstances as he only lost one point to the Frenchman. And there was still an Aprilia on the podium…

After speed before bad luck in Germany and then third at Assen, which marked his first rostrum finish with Aprilia Racing, second at Silverstone and only four tenths off Bagnaia was quite a statement from Maverick Viñales. The trend says the next step should be the top one, but it’s far from a simple task in MotoGP™. Can Top Gun do it, in his 200th Grand Prix and at a poetic place to get back on top? The Aprilia remains as serious a threat as ever, and at the very least it may be a good weekend to chip away more points from Yamaha for both Noale machines.

Meanwhile, KTM are racing at home and will have big aims for the weekend. The tougher season continues but there have been solid moves forward, and both Brad Binder (Red Bull KTM Factory Racing) and teammate Miguel Oliveira have won at the venue, in two very different styles. With the grandstands full of orange and a new chicane for everyone, will the hills be alive with a podium challenge from the Mattighofen factory? They’ll certainly be pushing to the limit to try and get in that battle for the first time since the first couple of races of the season.

Suzuki will also want more from the Red Bull Ring. The Hamamatsu factory have form there and Joan Mir (Team Suzuki Ecstar) even more so, with the circuit having been the scene of his first win in the World Championship and the number 36 seeming to have figured out a few secrets to being fast in Styria. For teammate Alex Rins the same could be said of Silverstone and the number 42 spent much of the race at the front, but after fading in the latter stages he’ll be looking to bounce back. Qualifying remains a challenge for both Suzuki and KTM, with the riders often charging forward on Sunday, so that will likely be a focus too as the new chicane creates a new lap record, likely to be set on Saturday afternoon.

Finally, for Honda there is some big news: Marc Marquez (Repsol Honda Team) will be back in the paddock. The number 93 isn’t riding or racing again just yet, but he’ll be on hand as the Japanese factory continue to focus on developing the new RC213V. Already in contact from home, now the eight-time World Champion will be on site as Stefan Bradl and Pol Espargaro aim to take the Repsol Honda further into the points, as do Takaaki Nakagami (LCR Honda Idemitsu) and Alex Marquez (LCR Honda Castrol).

Is the Red Bull Ring still Borgo Panigale turf? Can Maverick Viñales put in a poetic weekend? Are KTM up to push forward on home turf? What will the standings look like as we head for San Marino? We’ll find out this weekend, with MotoGP™ going racing at 14:00 (GMT +2) on Sunday for the CryptoDATA Motorrad Grand Prix von Österreich.

Augusto Fernandez (Red Bull KTM Ajo) is now officially on a roll as the Spaniard backed up his win at Assen with another at Silverstone, the second in a row from only his second ever Moto2™ pole. Heading into the Red Bull Ring he is now the Championship leader and with a 13-point cushion in hand over Ai Ogura (Idemitsu Honda Team Asia) as Celestino Vietti (Mooney VR46 Racing Team) falls from first to third.

At a home weekend of sorts for the Red Bull KTM Ajo team, it would be a big statement for Fernandez to win a third in a row. So can he? Ogura and Vietti will be aiming to hit back as quickly as possible, Jake Dixon (GASGAS Aspar Team) arrives full of confidence from a podium and there was a new threat at Silverstone too: Alonso Lopez (MB Conveyors Speed Up).

Explaining the differences between the Kalex and the Boscoscuro, it could be a tougher challenge at the Red Bull Ring for the Spaniard. But the rookie has impressed everyone since joining the grid and that incredible assault on the win – only losing out by 0.070 – was a serious statement. Lopez will be aiming to prove one to watch for the rest of the season too.

13 points is quite a swing for a single Sunday, and Austria will be another chance for Ogura, Vietti and Aron Canet (Flexbox HP 40) to hit back. Will it tighten up once again?

When Sergio Garcia (Gaviota GASGAS Aspar Team) was crashed out of the British GP, it seemed like a huge goal had suddenly appeared in front of teammate and closest challenger Izan Guevara. However, it wasn’t too long after that dramatic twist that another appeared as Guevara likewise found himself in the gravel, and likewise through no fault of his own. Compounding that, their two closest rivals in the standings – Dennis Foggia (Leopard Racing) and Jaume Masia (Red Bull KTM Ajo) – came through to capitalise to perfection in a 1-2. So what awaits in Austria?

For Garcia it’s a track where he’s shown good form – and had that stunning duel with Pedro Acosta – so there are definitely worse venues to try and stamp some authority back on the standings. For Guevara it’s also known territory, although the number 28 has taken a step everywhere in 2022. Interestingly, the exception so far was seemingly Silverstone, although we never got to see the finish. Was he on to lose that momentum regardless of the bad luck? And how will the new chicane affect Austria form?

Foggia on form, meanwhile, is always one to watch and the Italian came straight back out to win after that difficult end to the first half of the season in Assen. He’ll want to build on that fast, and so will Masia after digging deep to rescue a qualifying performance outside the top 20 into a podium. The Red Bull KTM Ajo rider will also have home turf glory on his mind for Red Bull, and so will Deniz Öncü (Red Bull KTM Tech3) after getting on the podium for the first time this season.

The Turk explained he’d changed his mindset this year to balance risk and reward, and that’s had an impressive effect on his consistency as he’s the only rider in the field to have scored in every race in 2022. However, he was still waiting for a trophy – and said Silverstone was where he put a little more on the line again to take that podium. What can he do in Austria?

#AustrianGP
Get All Our Latest News Sent Direct To Your Inbox
Join 30,246 other subscribers.
Follow on Social Media
Get the VROOM Podcast