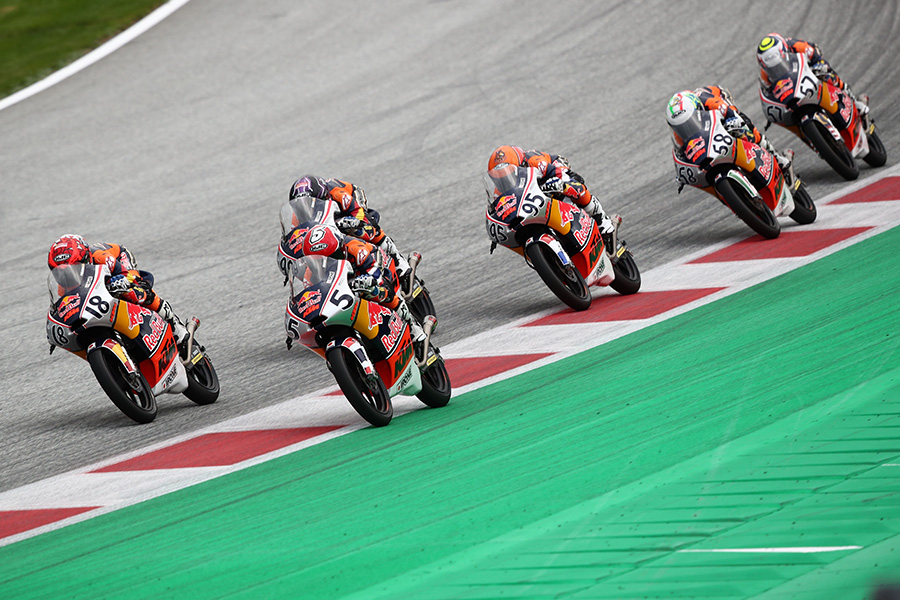 From pole position to Race 1 win, Angel Piqueras got the points but the 15-year-old Spaniard had to fight for every centimetre and was swallowed up several times by the pack of more that 10 KTMs that were often four abreast into every Spielberg turn.

The race was decided on the run into the line when Tatchakorn Buasri, the 21-year-old Thai ran wide and Piqueras stole the drive. Points leader José Rueda flashed across the line third but Buasri had exceeded track limits at that final corner and was thus demoted a place behind the 16-year-old Spaniard.

Fourth went to Collin Veijer, the 17-year-old Dutchman, who had taken the lead with 4 laps to go and did everything he could to hold the advantage to the flag, only being passed in the final laps.

“I felt confident and strong. That was the way I felt at the end of the race but not in the first laps.”
“It was a bit strange because in the early laps I did not feel so good with the bike. I can’t say really what it was but I didn’t have the right feeling and rhythm.”
“I kept going, tried to not make any mistakes and kept in the group. Then in the last five laps it started to come to me and I felt better and better.”
“I felt as good then as I did in Qualifying, I could push to the front and the feeling and the confidence was there. I am very happy with that and the win.”
“I didn’t change the way I rode, it just came to me. The bike is good and I will not change anything for Race 2.”

“The race was difficult, really too many overtakes. It was so intense and hard because I didn’t do so well in Qualifying.”
“So to finally get 2nd position I am very very happy, better than I expected. It is a very important result for the championship, to gain a few more points today.”
“From about 6 laps to go I lost the clutch so that made things more difficult. Obviously the guys will fix that for tomorrow and I will try to win Race 2. I need to keep winning, I am not thinking about being cautious for the championship.”

“I really enjoyed that, it was fantastic but I made too many mistakes. I went on the green too much, had to do a long lap and lost positions all the way back to 14th.”
“I had five laps to fight back and I manage to catch the leaders and get in front. I was leading I pushed so hard, too hard into the final corner and again touched the green, only just but I did and lost a position for track limit.”
“I love this track, I loved the race, can’t wait for tomorrow and I will try to be just as fast with no mistakes.”

“It was a difficult race, especially in the first laps because at the start I made a littkle mistake. Then I got myself back to the front.”
“I could get to the front but no matter what I did I could not overtake out of the slipstream, my height and weight is against me. It is what it is and I have to live with it.”
“I was in the limit all race, I took the lead and just pushed as hard as I could over the last laps, I felt good, I tried to stretch it but it was so difficult.”
“Buasri came past and I fought back through the last corners, tried to pass Rueda round the outside but he took the line and I had to back off and on the exit I lost a bit more. Finally P4, that’s not too bad.”

“I started very well and I took a good rhythm, About five of us broke away and I was pushing the group but then I got neutral and went wide. I went to the back of the group and the others caught up.”
“I started to get nervous, I was having trouble changing gear and I was trying to push too hard, touched the green too often got a long lap penalty.”
“I dropped to P16 but in the last two laps I got back to P9. My stomach is a bit better and I hope I can fight for the win tomorrow.”

Unfortunately, there was an accident involving two riders. One of them, Amaury Mizera, was taken to hospital in Graz. Soma Görbe was treated on-site.