Bagnaia and Miller 2nd and 3rd on grid for the #AustrianGP 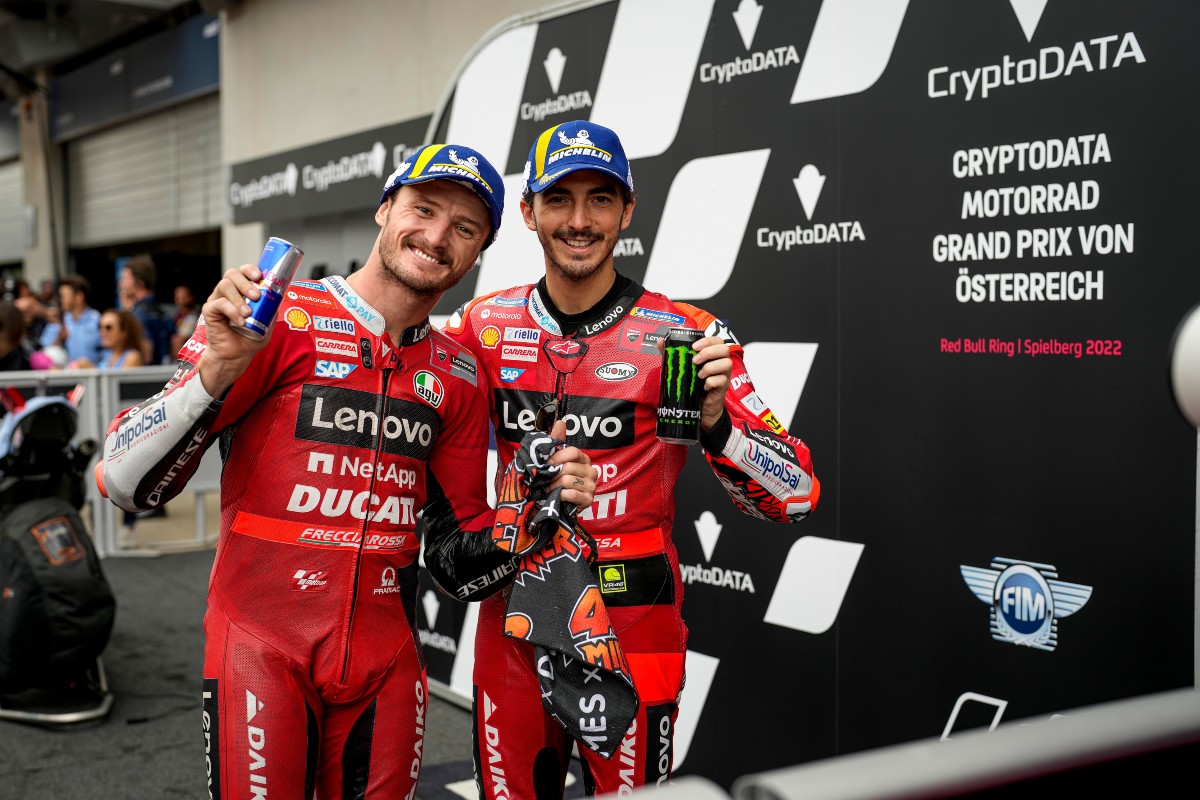 Francesco Bagnaia and Jack Miller will start from the front row at tomorrow’s Austrian GP at the Red Bull Ring. The Ducati Lenovo Team riders were protagonists of an excellent qualifying session, which saw them finish second and third fastest, respectively.

Starting from the first position on the grid will be Enea Bastianini, author today of Ducati’s 65th pole position in MotoGP with the Desmosedici GP of the Gresini Racing team. For Ducati, this is the fifth time in its MotoGP history and the third this year in which three Desmosedici GPs will start on the front row.

Tomorrow will be the seventh front row start for Bagnaia this season. Despite a crash in FP4, the Italian rider immediately regained feeling with his Desmosedici GP to finish Q2 with the second fastest time, just 24 thousandths behind Bastianini. Behind him was teammate Miller, 109 thousandths off the pole, in third with a time of 1:28.881.

Both yesterday and this morning, we struggled a little bit, but then in FP4, we found something that helped me to be faster and more competitive. Unfortunately, I also crashed in that session, but my team really did an incredible job restoring the bike in the little time they had, and I was able to use it in Q2. In qualifying, on the first outing, I didn’t immediately feel comfortable with the bike, which was slipping a lot on the rear, and that’s why I didn’t set a good time. On the other hand, in the second attempt, I found an incredible feeling that allowed me to improve a lot, even compared to this morning, so I’m very happy!

Being the front row here was really important, especially considering the new chicane where there could be some confusion on the first few laps. We have completed all the work planned for today, and now we can concentrate on the race: we have a very similar pace to the others, so now we will try to see where we can make up a few tenths more. The choice of tyre won’t be easy, and it will all depend on the temperatures we find, also considering that the weather changes very quickly here and we still don’t know what to expect in the race. The goal is to be ready for any conditions and to be in the group fighting for the podium.

The Ducati Lenovo Team riders will be back on track tomorrow at 9:40am CEST for the warm-up, while the race will get underway at 2pm local time over a distance of 28 laps.