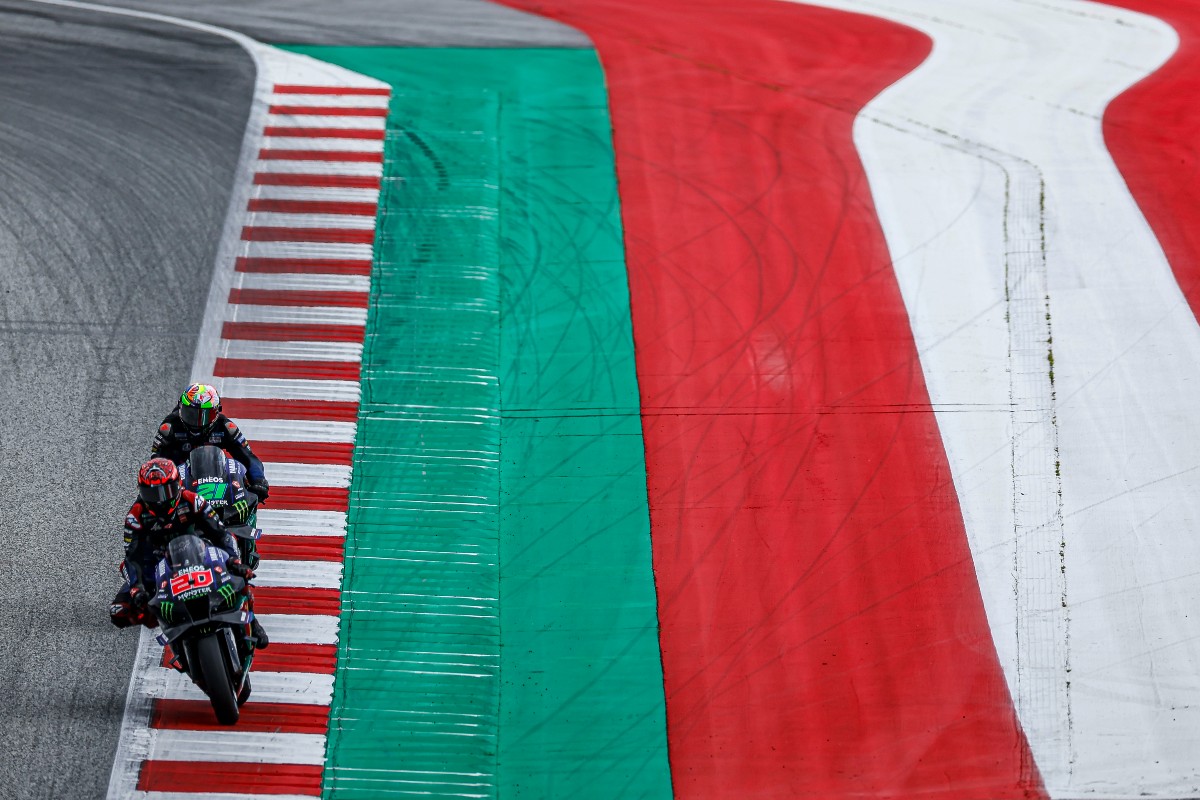 Monster Energy Yamaha MotoGP‘s Fabio Quartararo pushed to the limit in today‘s Q2 session in Spielberg, Austria. He will start the race from P5 on the grid. Franco Morbidelli was also giving it his all in Q1 but was unable to get through to Q2. He will start tomorrow‘s Motorrad Grand Prix von Österreich from P16.

Quartararo waited for the majority of the riders to leave pitlane before starting his Q2 session. With his first attempt cancelled due to a shortcut, he went all in for his second hot lap, setting a 1‘29.276s. It put him in fifth position with a 0.378s difference to first. He didn‘t improve on his next try and returned to the pits for a fresh set of tyres.

With a good five minutes left on the clock, the Frenchman started his second run. After a failed next try, he dropped back to seventh, but on his second attempt he improved his time, climbing up to fifth. He temporarily dropped to sixth but finished the session with a 1‘29.003s on lap 8/8 that moved him back up to fifth place.

Morbidelli made a small mistake on his first lap, but then moved up to fifth place on his second try with a 1‘30.134s. His next attempt didn‘t work out and he dropped back to eighth with a 0.7s gap to the top 2. He knew he needed new tyres and quickly returned to the box.

Back on his way with over six minutes remaining, the Italian was still holding eighth position. He was pushing and bettered his time to a 1‘29.978s, climbing to sixth place. Not able to improve on his next two laps, he had to push as hard as he could on his final attempt. As the times had dropped at the end of the session, he responded by bettering his time to a 1‘29.540s, even setting a red Sector 2. He took sixth place, 0.309s from first, which sees him start tomorrow‘s race from P16.

I’m not happy with the grid position, but the most important thing is that I feel that I gave my 100%. Naturally, you want to be higher up the order than second row when you do one of the best hot laps of your life here, but doing 28 laps in a row will be different. Of course, we know that tomorrow’s race is not going to be easy. We need a perfect start, perfect first lap, and do a good job with saving the tyres, and then we’ll see what happens. It will be tough, but we will fight for the best result possible, without aiming for a specific target.

It was good. I keep progressing and this is positive. Today we were close to getting into Q2 during Q1. So, that’s progress. I was having fun, especially in qualifying today. We improved a lot from FP4 to qualifying, which is what should be happening. So, I’m going forward, and it’s an encouraging day.