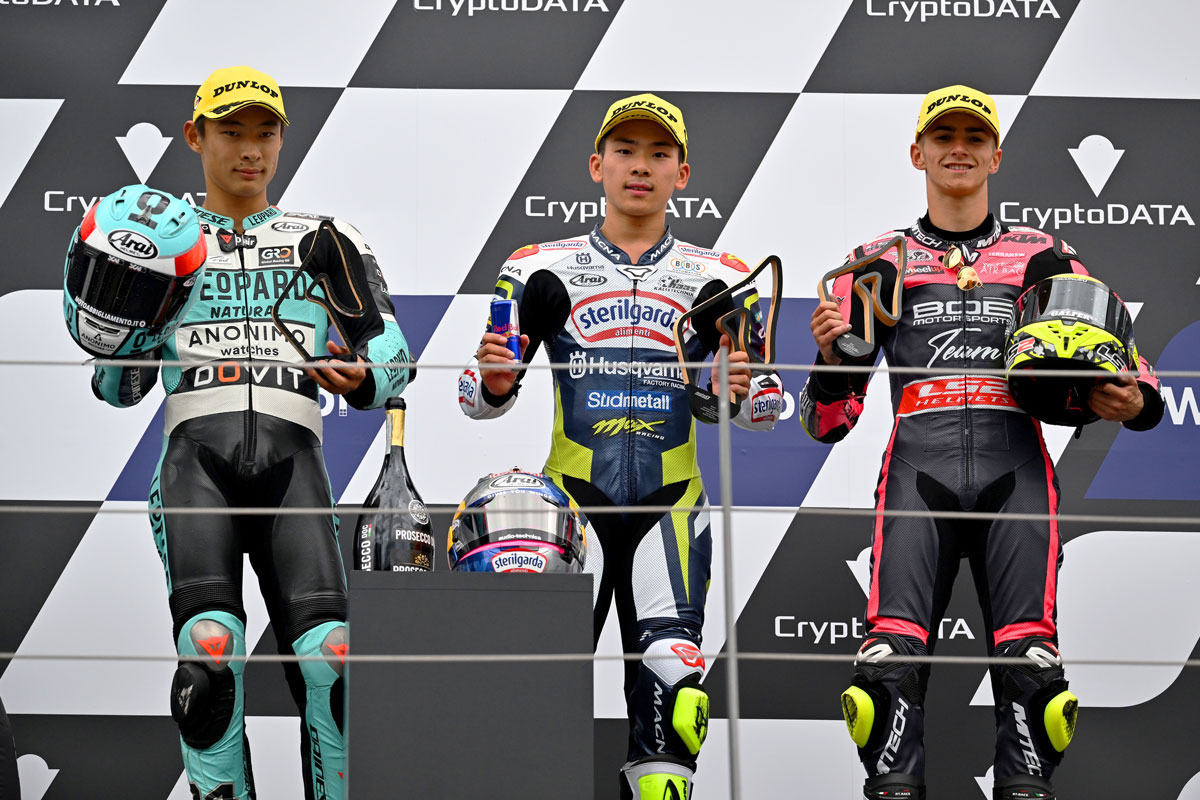 And to say that on this track the long lap penalty is quite penalizing, since more than three seconds are lost. In addition, it is necessary to pay close attention to avoid crossing the white line and being penalized again. But Ayumu was simply perfect and, after gaining the lead of the race, on the third lap he made the first long lap, passing on the finish line seventeenth. For the second long lap there was the possibility to make it within five laps from the first, so Ayumu made the second in the fifth lap of the race.

At the end of the two penalties Ayumu was 21st. From then on began a frantic comeback. In fact, after being the fastest on track, during the second lap, he was the fastest on the sixth, seventh, ninth and tenth lap. 1’40.995 is the second fastest lap of the race. These fast laps allow him to reduce the gap from the head of the race very quickly. In fact, on the eighth lap he was already in eleventh position, on the twelfth he was third and on the thirteenth, he completed his run-up reaching the first place. From then on, he never left the head of the race, managing to never leave space to his opponents.

Ayumu was simply perfect and thanks to his second win in 2022, he was back to 6 points from the world podium. In addition, today’s victory was achieved at Husqvarna, the Factory’s home track, so we can say that today was an incredible day.

John McPhee battled hard to a ninth place finish at today’s Austrian GP at the Red Bull Ring: he started from eighteenth position and at the end of the first lap he passed fourteenth. During the sixth lap he slipped into 20th position. With stubbornness in the following laps, he managed to make a good comeback, which at the end of the twenty-three laps of the race allowed him to reach the ninth position. 1’41.093 is John’s best lap in the race, which is the fifth fastest lap.

AYUMU SASAKI :
“I never gave up! In Silverstone I made a mistake, it was my fault and it meant another hard moment of a tough season with the penalty but I’m overcoming the obstacles. I came here knowing I had the penalty and I had to be better than anyone else. I had a good attitude to the job all weekend and had incredible pace. The race was dry fortunately and I didn’t do any mistakes. My last lap was amazing. Thanks to everyone. I hope we can catch the front guys in the championship in the coming GPs.”

JOHN MCPHEE :
“My pace was decent. I had good rhythm as soon as I could break the group but I struggled to overtake and was pretty vulnerable going into the corners. I had to line-up the exits. I finally got my head down but missed a few more laps to make the front group. I dug-deep today and pushed 100% but missed a bit. We have work to do but I’m sure the results will come.”