Bagnaia takes third consecutive win of 2022 at the #AustrianGP, Miller joins him on podium in 3rd 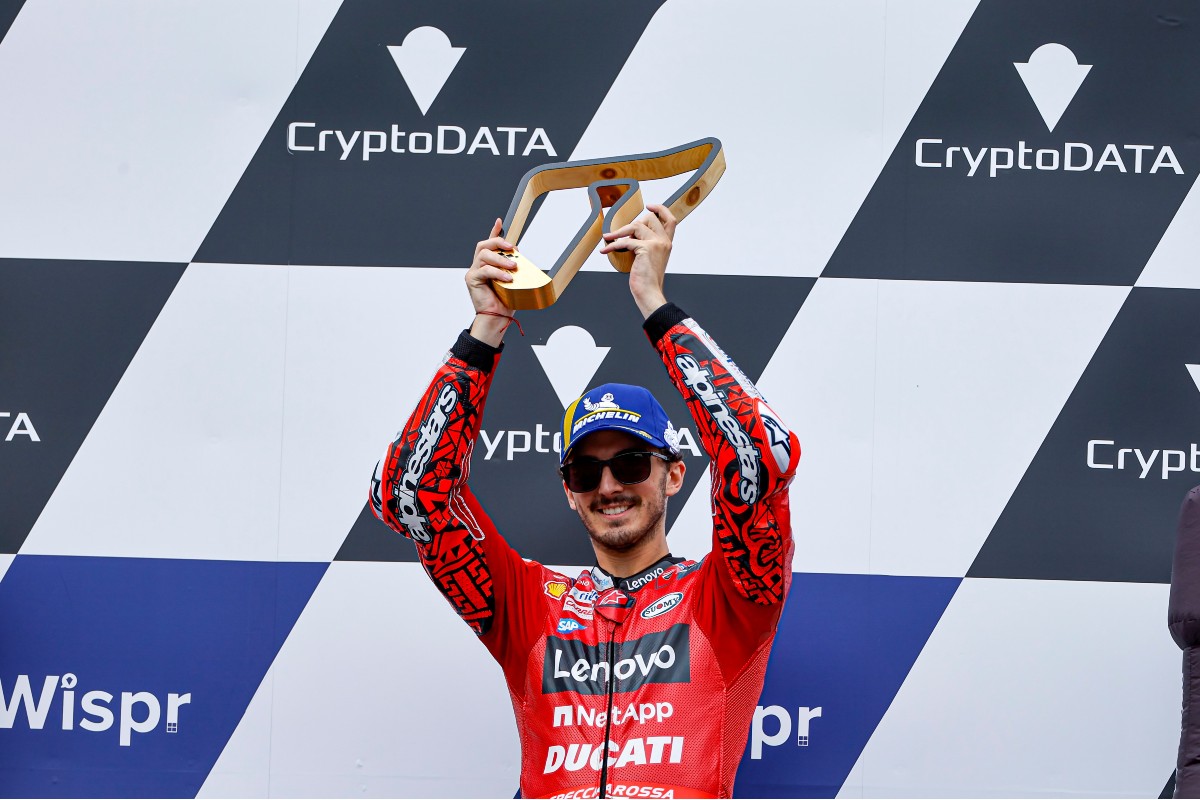 Pecco Bagnaia climbed onto the top step of the podium for the third consecutive time this season as he took victory in the Austrian GP held this afternoon at the Red Bull Ring, near Zeltweg. The last time a Ducati rider had reached this milestone was in 2008, when Casey Stoner scored the last consecutive hat-trick for the Borgo Panigale manufacturer.

Starting with the second fastest time, Pecco was once again the protagonist of a perfect race that saw him leading from start to finish, only defending himself once from the attack of team mate Jack Miller. The Australian, who also started from the front row from, the third spot on the grid, was behind Bagnaia for a long time, holding off first the Desmosedici GP of Jorge Martín (Pramac Racing) and then the Yamaha of Fabio Quartararo. The Frenchman finally passed him with four laps to go, and Miller had to settle for third, securing his second consecutive podium after his third place at Silverstone.

After his fifth win of the season, Bagnaia retains the third position in the overall standings and moves 44 points behind leader Quartararo, while Miller moves up to fifth. Ducati maintains the lead in the manufacturer’s standings with 96 points over Yamaha, while the Ducati Lenovo Team advances to the top of the team standings.

It was a great weekend. We weren’t very fast, but after FP4, we found a solution that allowed us to be competitive in qualifying and consistent in the race. In order not to risk problems, we made maybe one tyre choice that wasn’t quite right, and in the last laps, I suffered a little, but in the end, we made it. I’m very happy and can’t wait to get back on track in a fortnight for my home race at Misano.

I’m thrilled with today’s result. I pushed as hard as possible to stay with Pecco until the end, but after I tried to pass him, he brought up the pace, and it was difficult for me to respond. Then, I started to suffer a bit with the tyres towards the end. We fought hard with Fabio and Jorge for second place, and I was hoping to get the better of them, but in any case, it’s our second, third place in a row, and the aim is to continue fighting for the podium in all the upcoming races. It is a great moment for the team, so I hope we can continue with this momentum at our home race in Misano.

The Ducati Lenovo Team riders will be back on track from 2nd-4th September for the second home race of the 2022 season at the Misano World Circuit Marco Simoncelli: the San Marino and Riviera di Rimini GP.