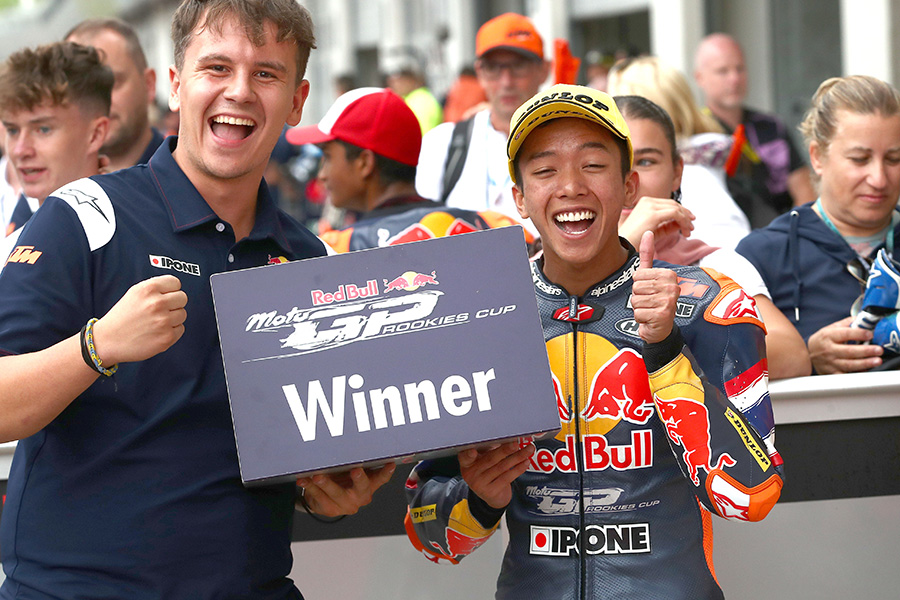 Tatchakorn Buasri rode another brilliant Red Bull MotoGP Rookies Cup race at Spielberg and this time the 21-year-old Thai took victory as Màx Quiles, the 14-year-old Spaniard clipped the green with the wheels of his KTM on the exit to the last corner and was dropped a place.

“I enjoyed the race today so much, my first win in Rookies Cup and standing on the podium under my country’s flag and hearing our anthem is so special.”
“Yesterday I just made too many mistakes. Today I kept calm, kept my concentration, I really learnt from yesterday and only made a few mistakes,” he laughed.
“Both of the last two years the races here have been good to me and I have taken a step forward. I hope the same for this year so that I can go to Aragon and Valencia and get the same sort of results there.”

“I am very angry and disappointed because of my mistake in the last turn but….” choked the youngster.
“I’m happy because I rode a good race, I got on the podium. The bike was great this weekend, it gave me a great feeling and I had a lot of rhythm.”
“I still had a little difficulty with some gear changes but less than yesterday as I was concentrating better.”

“Today, I don’t know, we rode faster than yesterday, the race time was quicker. I didn’t really feel so good on the bike, not so strong.”
“On the last lap I really pushed the limit but only got a podium this time, not the win.”
“It is a podium though and good points so I am happy. I think I can be battling at the front also in the last races of the season.”

“I’m happy because I get some good points for the championship but not too happy because I am not on the podium,” he chuckled. “It’s good for the title chase.”
“It’s a good track but personally I prefer more corners, this is good for the smaller riders. I hope it will be different in Aragon and Valencia, we’ll see.”

Veijer gives everything to stay in the hunt

“It was a hard race again, we did change the sprocket, went lower, from 38 to 37. It went a bit better, gave me more drive out of the corners but of course it cost me on top speed. It is what it is.
“I tried my very best, I pushed hard all race, the start and first lap was a lot better today.”
“At the end Ruda came past, it was difficult to get past him again andf he lost the front 4 a bit so unfortunately a podium wasn’t possible this time.”
“We just missed a bit of straight line speed but I am happy that I got everything I could and look forward to the next one.”