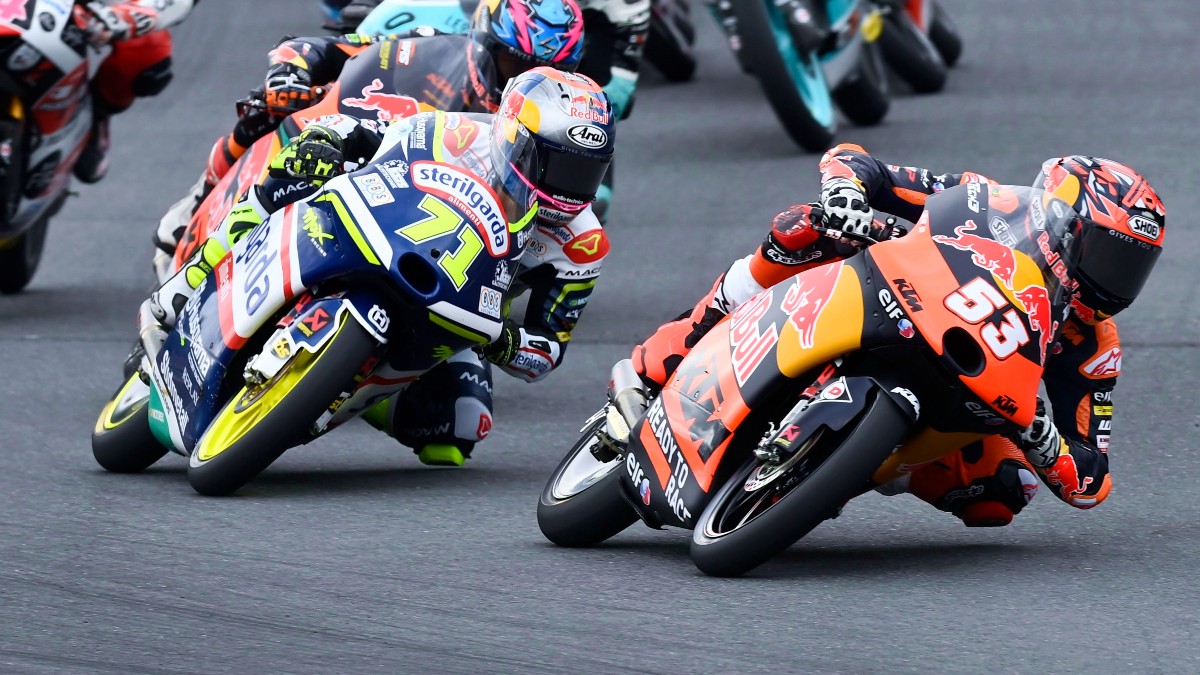 The Moto3 World Championship once again made the show on Sunday at the Red Bull Ring in Spielberg as the lightweight class took its thirteenth start of the season. Red Bull KTM Tech3’s duo Deniz Oncu and Adrian Fernandez were eager to give it their all on KTM Turf, with the Turkish rider starting from the front row for the fourth time this season, while the young Fernandez lined up from row 7.

With high expectations on Sunday after being one of the fastest riders all weekend, Deniz Oncu continued to maintain his status of favourite in the warm up as he was fifth in 1’42.279. When the lights went out for twenty-third lap, he came out in first after the first few corners, battling it out with old teammate Ayumu Sasaki for the lead at the end of lap 1. Unfortunately, the new chicane played him out in the early laps as he went straight while trying to find space in a busy leading group, an action which saw him slipping to P9 with a small gap to recover. With fourteen laps to go, he had already made it back to the Top 5 with a race pace set in the 1’41. Halfway through, the leading group was drawn combining the usual front guys Oncu, Sasaki, Guevera, Suzuki and Garcia. It was time to really give it a push with eight laps to go as the battle for the podium became even more intense, but Deniz continued to fight hard for it. Third at the start of the final lap, Deniz was then overtaken by opponent David Munoz and saw the podium slip away. He settles with a fourth position with a bittersweet feeling.

Adrian Fernandez was starting a bit far today from P22. When the race started, he was twenty-third at the end of the first lap after taking a smooth start. He settled at this position for a couple of laps with a rhythm in the 1’42, similar to his warm up time earlier in the morning. He managed to gain two places a few laps later behind Andrea Migno, and then managed to take the P19. He passed the checkered flag in P17, not so far from the points.

Red Bull KTM Tech3 will now head to Misano for the next round in two weeks, with Deniz Oncu sitting fifth tied with KTM teammate Jaume Masia in the championship standing, and Adrian Fernandez, twentieth.

I tried to have a clever race today, but for a moment at the start, I was a bit lost and ended up missing out on the new chicane. Today I struggled to overtake riders and I was too slow in the straights. I kept trying to recover in the corners, but it was just not enough. Within the final laps, I wanted to fight for the victory but I lost my podium in the final lap. It is really hard to take in and I am really sad today. I’ll try my best again next time.

The race was difficult for me today. I was starting quite far on the grid and it was tough to catch the front groups because there are a lot of straights. My rhythm was regular, but I lacked pace to be able to go challenge the riders ahead of me. I still managed to finish in P17 after starting from P22, I am not far from the points, but today was not enough. I will aim to do better at the next round in Misano. Thank you team for your dedication.