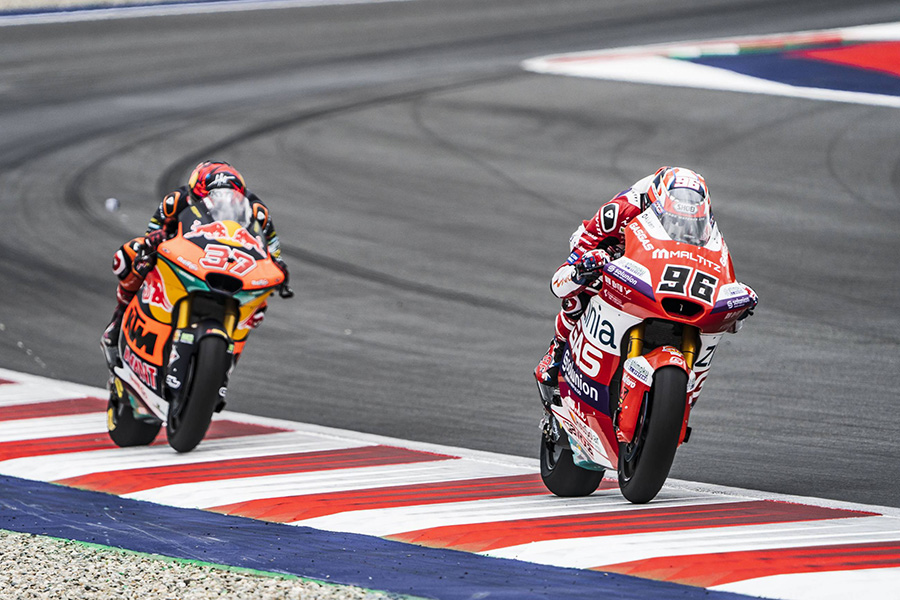 The Zinia GASGAS Aspar rider has achieved his third consecutive podium with an overtaking in the last sector, which places him fifth in the championship

Japanese Ai Ogura has achieved victory in Austria from pole position, in a very complete weekend in which he has also managed to position himself as the new leader of the championship, by just one point difference with respect to Augusto Fernández, who was fifth today. The Japanese rider had strong opposition from his teammate Somkiat Chantra, who tried to overtake him until the end to take victory. Finally, he entered the finish line second, 173 thousandths off Ogura, and ahead of Zinia GASGAS Aspar rider Jake Dixon.

Jake Dixon has prolonged the streak of the GASGAS Aspar in the World Championship with the 13th consecutive race on the podium, either in the Moto3 or Moto2 category. After Sergio García Dols and Izan Guevara finished outside the top 3, the team’s hopes of continuing this run of podium finishes every weekend rested with the intermediate category riders. Dixon was third in the early stages of the race, but at one point, on lap seven, his bike hit neutral and he lost some distance to the podium group. Despite this, he has not given up, and lap after lap he has worked to recover positions until, in the last lap, he tried to overtake Pedro Acosta, third so far, on two occasions. The first has been unsuccessful, but in the second, already in the last corner of the race, he has succeeded. With this result, Dixon has three consecutive podium finishes, which leaves him tied with two other riders for fifth position. His teammate Albert Arenas has completed an upward race in which he has recovered several positions to finish ninth, returning to the top 10 and to the points for the first time since Germany.

3rd Jake Dixon (+7.854):
“It was such a crazy race, honestly! I was strong in the beginnin, but then I was struggling to keep my tires in good shape from about lap eight. Then I tried some different maps. My heart and determination weren’t going to let me finish fourth in that race. I tried once, and it didn’t work, but then squared it off into the last corner. It was amazing to finish in this position – this is probably one of my worst tracks because I’m not a hard braker – but here we are!”

9th Albert Arenas (+20.661):
“A difficult race but also a good one after two difficult GPs. It wasn’t my best performance but it was important to regain some confidence and feeling. We’ll keep pushing and looking to see where we can improve. I think we already made some progression through the sessions this weekend and we can already begin to think about how we’ll work for Misano.”