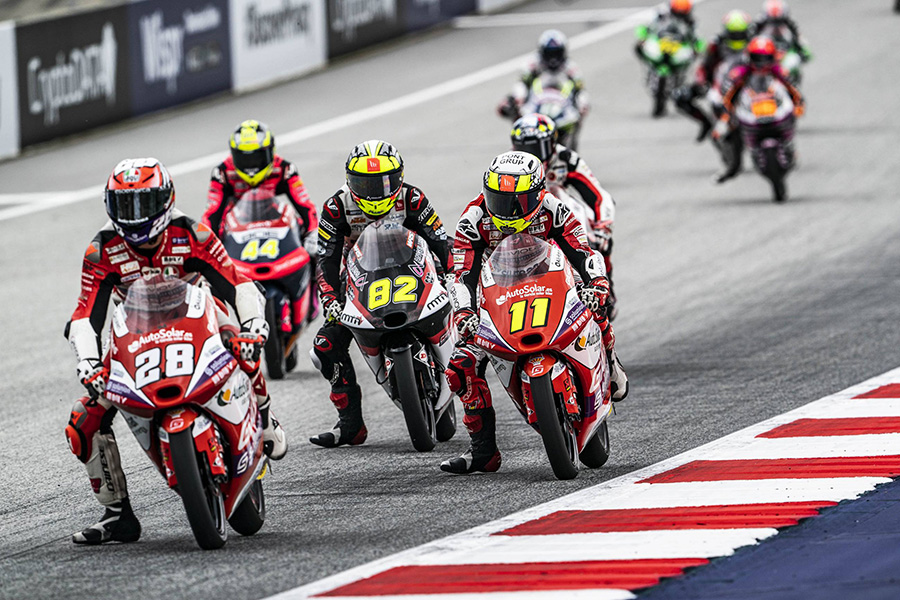 Ayumu Sasaki has given a lesson in the Moto3 race, in which despite having to serve a double long lap penalty for the incident with Sergio García Dols at Silverstone, he has been able to get his second victory of the season. Sasaki was twentieth, 3.5 seconds off the lead after serving the penalty, but little by little, thanks to several fast laps and track records, he has recovered the gap and, from the thirteenth lap, he has led the race to leave the rest of his rivals without options. He was accompanied on the podium of the Austrian Grand Prix by Tatsuki Suzuki, second, and David Muñoz, third.

Autosolar GASGAS Aspar has once again regained advantage in the Moto3 standings after an Austrian Grand Prix in which both Sergio García Dols and Izan Guevara finished in the top 10, but ahead of rivals such as Dennis Foggia and Jaume Masiá. Both have been consistently in the front group, with Izan Guevara leading six laps of the race, but have reached the end of the race with no chance of fighting for the podium. In spite of everything, the two Autosolar GASGAS Aspar riders closed the Austrian race with good feelings and with a slightly higher advantage over their rivals, as Dennis Foggia finished in twelfth position and Jaume Masiá crashed. Sergio García continues to lead, with 193 points, to Izan Guevara’s 188 and Dennis Foggia’s 144.

5th Sergio García Dols (+2.453):
“A positive weekend overall. We missed a bit of feeling out there; on some sections I was very fast and on others not so much and that really held me back today. I could break away but then I had to hold my position so it wasn’t an easy race. I did what I could. 5th place and only two seconds from the win on what was a very fast pace. I’m focused and motivated for Misano where I am sure we’ll do better.”

7th Izan Guevara (+3.074):
“I had a good race. I worked my way to the front with the leaders but used quite a bit of tyre and couldn’t go with Sasaki. He had too much for us today. I dropped back a bit and could then recover but I was having to work a lot physically and the rear end was pushing. I couldn’t latch on to the group in front, so, overall, a strange weekend where we couldn’t quite find the perfect set-up. For Misano we’ll improve.”