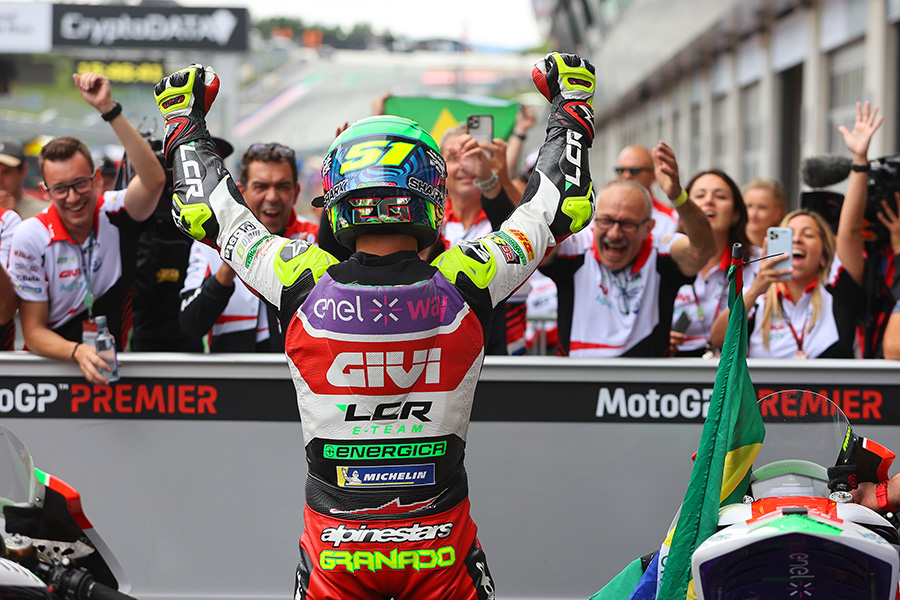 It’s absolutely game on in the FIM Enel MotoE™ World Cup after Eric Granado (LCR E-Team) made it two wins from two at the CryptoDATA Motorrad Grand Prix von Österreich. The Brazilian’s double at the Red Bull Ring means he trails Dominique Aegerter (Dynavolt Intact GP MotoE™) by just 17.5 points with 50 on offer in the final round at Misano. Aegerter finished third in Race 2 in Austria thanks to a final-corner pass, while Miquel Pons stayed ahead of the Swiss rider to make it an LCR E-Team 1-2.

As the lights went out, Mattia Casadei (Pons Racing 40) got the holeshot from the middle of the front row and Matteo Ferrari (Felo Gresini MotoE™) passed pole-sitter Granado for second at Turn 1. Kevin Zannoni (Ongetta SIC58 Squadracorse) lunged at both Granado and Pons at Turn 3, but Granado had the better exit and would emerge still in third place. At Turn 4, Aegerter then very nearly crashed but held on to his Energica Ego Corsa and also to sixth spot.

Granado overtook Ferrari at the start of Lap 3, and was quickly onto the tail of Casadei in the battle for the lead. He made his move through Turn 6 on Lap 4, but Casadei stuck with him. The man who fell – literally – two corners short of victory in Race 1 on the afternoon prior then tried to reclaim the lead from Granado at the start of the seventh and final lap of Race 2, nosing ahead but unable to make the pass stick.

In the meantime, Aegerter had climbed to fourth and despite running well wide at Turn 1 on Lap 6, he was showing all of his usual late-race speed. Still, Granado remained in the lead and LCR teammate Pons was up into third, soaking up precious World Cup points. Pons would have another four points of his own when he eventually completed a final-lap pass for second place on Casadei through Turn 6, too.

The story still wasn’t over, however. Casadei was defensive at Turn 9 but Aegerter had his sights set on the podium. The Swiss rider attacked at the final corner and got the job done, claiming third as Granado and Pons crossed the line just ahead.

Casadei was forced to settle for fourth ahead of Ferrari taking the chequered flag in fifth, but the latter would officially be classified ninth due to a three-second penalty for exceeding track limits, meaning Alex Escrig (Tech3 E-Racing) inherited fifth in the classification.

Rounding out the top 10 were Xavi Cardelus (Avintia Esponsorama Racing), Hikari Okubo (Avant Ajo MotoE™), Hector Garzo (Tech3 E-Racing), Ferrari, and Jordi Torres (Pons Racing 40). All 15 riders who took the start made the finish, but Xavi Fores (Octo Pramac MotoE™) was a DNS after his bike was pushed off the starting grid just before lights went out, and Bradley Smith (WithU GRT RNF MotoE™ Team) had already been declared unfit following a crash in Race 1.

For Aegerter and Granado, there is still everything left to play for when the FIM Enel MotoE™ World Cup heads to the Gran Premio Gryfyn di San Marino e della Riviera di Rimini for the final round of the season. See who will take ultimate MotoE™ glory in two weeks as the final 50 points go into play.