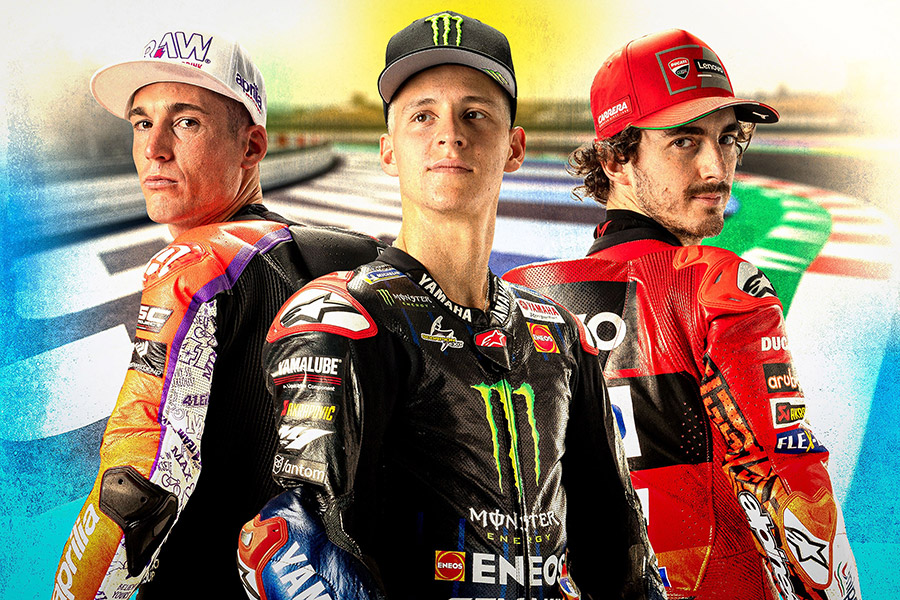 Misano World Circuit Marco Simoncelli has already staged some crucial showdowns between Championship leader Fabio Quartararo (Monster Energy Yamaha MotoGP™) and Francesco Bagnaia (Ducati Lenovo Team), and the colourful, Adriatic stage is more that set for another. Bagnaia arrives from three wins in a row and could become the first Ducati rider ever to make it four, and Quartararo arrives from a truly stunning ride to second; also Yamaha’s best ever result at the Red Bull Ring. Oh, and for Bagnaia, Misano is home turf…

The Italian has shown incredible speed and won at the venue before, that speed unrivalled despite some bad luck. But the Frenchman made for close company, Yamaha are the most successful factory at the track and Quartararo also won the title at the venue last year, forever making it part of his story too. So will the two come face to face once again, and could we see a proper duel to the flag? We’ve not yet seen the gloves come off between the duo as yet, but both are more than ready to rumble.

Elsewhere at Yamaha, Franco Morbidelli (Monster Energy Yamaha MotoGP™) also has good memories of Misano as he’s won there, and it’s a home venue, so he’ll be looking for more than his recent struggles. Darryn Binder (WithU Yamaha RNF) will also want more points at a venue that should suit the Yamaha, and there’s an emotional occasion for Andrea Dovizioso on the other side of the RNF garage.

After the second most starts ever, wins on two different bikes and podiums on three, the time has come for Dovi to hang up his leathers. One of the biggest protagonists of recent years, the Italian has had a tougher return with RNF but remains of the best-loved and most successful on the grid. Where will he finish as he bows out?

For Ducati, meanwhile, the charge continues to get the word armada adopted into Italian. ‘Pecco’ has three wins in a row but his Borgo Panigale stablemates are no slouches. Jack Miller (Ducati Lenovo Team) was back on the podium in Austria and has been a consistent threat at the front of late, whereas Johann Zarco (Prima Pramac Racing) wants a little more from the weekend.

Jorge Martin (Prima Pramac Racing) will also want to bounce back after his late crash in Spielberg, and he arrives from the Ducati 2023 decision going public. He will likely feel he has a point to prove, and there could be another duel with Enea Bastianini (Gresini Racing MotoGP™). And speaking of the Beast…

The trajectory that has led Bastianini to the factory Ducati team from next year began at Misano as he stormed through to podiums, his first visits to the rostrum before he made a habit of visiting the top step with Gresini. His record at the venue also goes back some in his career, and it’s home turf, and the pressure is off… so what can Bastianini bring to the party?

Luca Marini (Mooney VR46 Racing Team) and rookie teammate Marco Bezzecchi also have form at Misano, and increasingly great form in the premier class. Marini arrives from his best ever finish of fourth in Austria, and Bezzecchi was once again top rookie in Spielberg. What can they do? Bezzecchi will also want to pull further clear of Fabio Di Giannantonio (Gresini Racing MotoGP™) in the fight for Rookie of the Year as the two Italians continue to hold first and second there.

Now, on to Noale. Austria was certainly a more muted outing for Aprilia Racing, but that says a lot when it was still a weekend of two multiple-point hauls for Aleix Espargaro and Maverick Viñales. By 2022 standards, they want much more. So the Noale factory will be hoping they can prove that was a blip as we arrive on the Riviera di Rimini, and Aleix Espargaro certainly will want to get back in that fight right at the front for the podium as Bagnaia continues to close and Quartararo just pulls a little further clear at the top.

Viñales, meanwhile, may well be rubbing his hands at the prospect of arriving at Misano. He’s already been on pole and won at the venue, and it’s where the adventure began with Aprilia. Can he get back in that trend of upward results and fight for the podium again?

For KTM, the hunt for progress continues, but the Sunday heroics of Brad Binder (Red Bull KTM Factory Racing) got back on track in Austria as the South African stormed up to seventh. Binder’s comebacks – all the more remarkable given the number 33 often starts well back in the pack but has only one DNF so far this year – continue to impress, and teammate Miguel Oliveira has also been consistently scoring some good chunks of points since Mugello. The Austrian factory have a front row and a podium in their past at Misano, but it will likely be more the top six and top five that proves the aim in 2022. Rookies Remy Gardner and Raul Fernandez at Tech3 KTM Factory Racing, meanwhile, look for some more points on the Riviera di Rimini.

At Suzuki, 2020 World Champion Joan Mir will be sidelined so it’ll be down to Alex Rins (Team Suzuki Ecstar) to lead the charge. It’s been a tougher run of late for the Hamamatsu factory in the final half season (for now), but every new race weekend is a chance at a result. It’s also a chance for Japanese rider Kazuki Watanabe, replacing Mir fresh from a podium at the Suzuka 8H, to try out a prototype MotoGP™ bike.

Finally, the difficult run continues on-track for Honda, but the positive headlines coming out of Camp MM93 certainly make for interesting reading. Now able to train on motorcycles and with consistent rumours about a return to the track at the test following the San Marino GP, there seems plenty to be positive about for Marc Marquez.

Takaaki Nakagami (LCR Honda Idemitsu) is moving to within striking distance of the number 93 in the standings if he can continue scoring, too, and Pol Espargaro (Repsol Honda Team) is only three points further adrift. The number 44 has good memories from Misano since a podium last year too, with Marc Marquez leading a Repsol Honda 1-2. Alex Marquez (LCR Honda Castrol), meanwhile, will likely be looking for a solid finish and a good springboard for Aragon as well; one of the venues at which he took a stunning rookie podium in MotoGP™.

After another twist in the tale it’s only a single point between Ai Ogura (Idemitsu Honda Team Asia) and Augusto Fernandez (Red Bull KTM Ajo) at the top of the table, and the Japanese rider leads. He leads in style too after a convincing second Grand Prix win, putting an end to Fernandez’ run of form. As the paddock heads for Misano, the two will be key contenders once again – but it’s also the home race for former Championship leader Celestino Vietti (Mooney VR46 Racing Team), who now needs a result.

The Italian now trails by 26 points and has Aron Canet (Flexbox HP 40) on his tail, and there’s the extra complication from the likes of Jake Dixon (inde GASGAS Aspar Team) as the Brit now has three podiums in a row, and Somkiat Chantra (Idemitsu Honda Team Asia) fresh from his stunning ride in Austria. There’s also Alonso Lopez (+Ego Speed Up) continuing to show serous speed. If that weren’t enough, Pedro Acosta (Red Bull KTM Ajo) was also immediately back at the sharp end on his return from injury, only just missing out on the rostrum…

The Italians – including another appearance for veteran Mattia Pattini with the GASGAS Aspar Team – will be eager for home turf glory, but of late it’s been Spain vs Japan. Who will rule in San Marino?

A few races ago, Moto3™ seemed like the GASGAS show but after a recent rollercoaster of glory and a dash of disaster, everyone is talking about Ayumu Sasaki (Sterilgarda Husqvarna Max). He won for the first time at Assen, he crashed out at Silverstone earning two Long Laps and denting Sergio Garcia’s (Gaviota GASGAS Aspar Team) charge, but then he had something to prove at the Red Bull Ring… and prove it he did.

As low as 24th at one point in the race, the Japanese rider came back from those two Long Laps to win, and what a statement win it was. He’s now fourth overall and only a handful of points behind Dennis Foggia (Leopard Racing), who had a tougher Austria, and not so far from the top. Is it too late for a charge at the crown?

Garcia and teammate Izan Guevara won’t go down without a fight, but looking ahead they need to start hitting back soon. Misano is familiar turf, Aragon has seen Guevara stun in the past with three wins from three in JuniorGP™, but then we head for the flyaways and that could prove very good turf for former Idemitsu Asia Talent Cup Champion Sasaki.

Before that though, there are also the home heroes this weekend to consider. Foggia will certainly be confident of some good form given his previous glory at the venue, and on home turf. His compatriots will be pushing hard too, and the likes of Andrea Migno (Rivacold Snipers Team) have shone on the Riviera di Rimini. Can they strike back?

Sasaki, former Misano winner Tatsuki Suzuki (Leopard Racing), David Muñoz (BOE Motorsports) and Deniz Öncü (Red Bull KTM Tech3) all arrive with their own roll, but the GASGAS duo and the home heroes are eager to fight back.