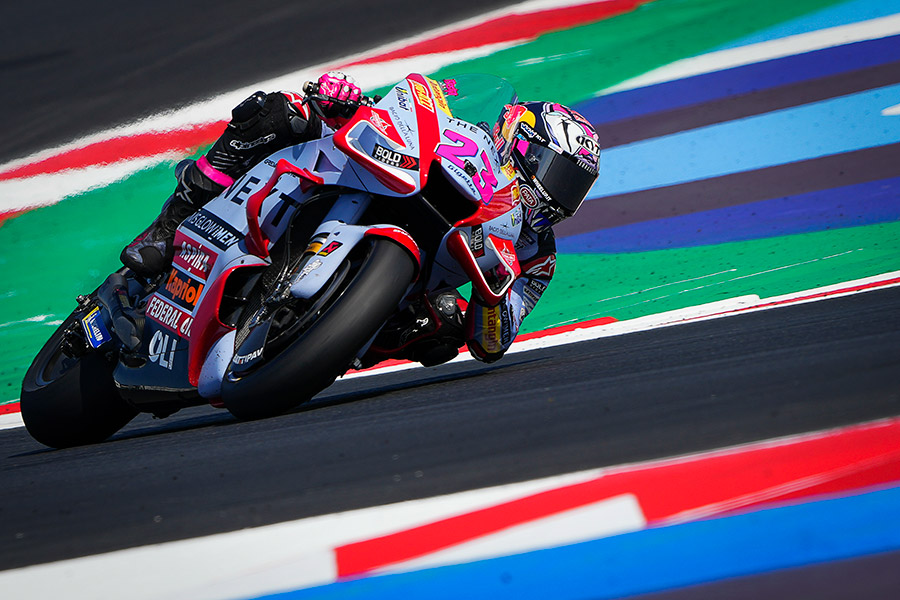 Enea Bastianini (Gresini Racing MotoGP™) set a 1:31.517 in MotoGP™ FP2 to end Day 1 at the Gran Premio Gryfyn di San Marino e della Riviera di Rimini top of the pile, with the Italian beating 2023 teammate Francesco Bagnaia (Ducati Lenovo Team) by just 0.114s. Bastianini took his first premier class podium at the venue here last year, and now the Beast is back and qicker than ever. Jack Miller (Ducati Lenovo Team) made it a Desmosedici 1-2-3 on Friday afternoon, the top three split by 0.185s, but there was another headline from the red garage: a three-place grid penalty for Bagnaia after the Italian was slow on the line in FP1…

Fabio Quartararo (Monster Energy Yamaha MotoGP™) topped FP1 from Miller and a bolting Michele Pirro (Aruba.it Racing) as the wildcard showed some early speed at a venue he knows well, and Miller and Pirro proved the only two Borgo Panigale machines in the top five in the first session of the weekend. Bagnaia was sixth, but after getting in the way of Alex Marquez (LCR Honda Castrol), having thought the session was finished, the Italian got his penalty. Nevertheless, he can still fight for and take pole in the history books, with the penalty applied after.

It wasn’t the start to the afternoon session that Ducati would have been looking for either, as Johann Zarco (Prima Pramac Racing) and then Bagnaia crashed unhurt in separate incidents, but by the end of play the Bologna bullets would be back on top.

Before that, Maverick Viñales and Aprilia Racing teammate Aleix Espargaro found themselves P1 and P2 heading into the final 20 minutes of FP2 as the RS-GP stars looked to be back in the groove following a tricky weekend at the Red Bull Ring. Viñales, at the summit, was nearly three tenths clear of the chasing pack after setting a 1:31.882. They’d also been ahead of Bagnaia in the morning.

Miller and Quartararo leapfrogged Aleix Espargaro to split the Aprilias with just under 15 minutes left on the clock, but it was still a good showing from Noale. Next, World Championship leader Quartararo climbed to P1 by just 0.004s, but then it was time attack territory…

Just before the chequered flag, Bastianini, Bagnaia and Zarco went P1, P2 and P3 in quick succession, and Miller joined them at the sharp end of the timesheets by taking over in P3. Viñales was trying to improve his time but the Spaniard couldn’t better his earlier pace, seeing Ducati lockout the top four positions.

Provisional Q2 places
Again, Quartararo leads the non-Desmosedici charge in P5 ahead of Viñales and Aleix Espargaro, the trio within half a second of Bastianini heading into Saturday’s action. Jorge Martin (Prima Pramac Racing), Marco Bezzecchi (Mooney VR46 Racing Team) and Franco Morbidelli (Monster Energy Yamaha MotoGP™) were late improvers to pounce into the top 10, and with the weather looking uncertain, it could prove crucial in terms of automatic Q2 promotion…

Thanks to an 1:36.573 in Moto2™ FP1, Celestino Vietti (Mooney VR46 Racing Team) tops the standings on Friday at the Gran Premio Gryfyn di San Marino e della Riviera di Rimini despite a crash in the closing stages of FP2. Alonso Lopez (+Ego Speed Up) is just 0.024s in arrears and rounding out the top three is wildcard Mattia Pasini (Inde GASGAS Aspar Team) – the Italian also crashed in the afternoon session.

With 20 minutes to go, Somkiat Chantra (Idemitsu Honda Team Asia), Lopez and Albert Arenas (Inde GASGAS Aspar Team) were the only riders who had improved their times inside the top 10, as the top five remained unchanged from FP1.

After finishing FP1 in P2, wildcard Pasini then had a small crash at Turn 4 with 15 minutes to go while still in second, 0.095s off Vietti’s Friday morning pace. A few minutes later, the latter crashed unhurt at Turn 10 right in front of teammate Niccolo Antonelli, who did well to avoid both bike and rider.

Some improvements came in the final five minutes of the session, most notably Lopez moving up to P2 ahead of Pasini, with the top five covered by just 0.119s as Augusto Fernandez (Red Bull KTM Ajo) and Jake Dixon (Inde GASGAS Aspar Team) bettered their morning efforts.

Leopard Racing’s Dennis Foggia has marked himself as an early favourite in Moto3™ at the Gran Premio Gryfyn di San Marino e della Riviera di Rimini after prevailing by a margin of 0.382 seconds in FP2. ‘The Rocket’ lived up to his nickname by setting a 1:41.608 around the Misano World Circuit Marco Simoncelli when no one else could go any better than a 1:41.990. Sterilgarda Husqvarna Max’s Ayumu Sasaki, the race winner a fortnight ago at the Red Bull Ring, was second fastest, with fellow Austria podium finisher Tatsuki Suzuki third but a full 0.546 seconds adrift of teammate Foggia.

With less than three minutes remaining before the chequered flag, Sasaki went quickest on a 1:41.990 and World Championship leader Sergio Garcia (Gaviota GASGAS Aspar Team) jumped from 24th to second on a 1:42.158. However, Foggia hit back with his 1:41.608, following Suzuki across the stripe. Behind that top three of Foggia, Sasaki, and Suzuki is Garcia and another rider who was outside the top 14 Q2 cut-off for much of the session: John McPhee (Sterilgarda Husqvarna Max), who lapped as quickly as a 1:42.278.

Provisional Q2 places
Behind that top five, sixth and seventh went to MT Helmets – MSI team-mates Diogo Moreira and Ryusei Yamanaka, while Jaume Masia (Red Bull KTM Ajo) shook off pain from a highside in FP1 to claim eighth at 0.818 seconds off the pace. Izan Guevara (Gaviota GASGAS Aspar Team) and Öncü rounded out the top 10, with David Muñoz (BOE Motorsports) last of those within one second of Foggia’s pace. The latter had regrouped from an early spill at Tramonto (Turn 10). Stefano Nepa (Angeluss MTA Team), Joel Kelso (CIP Green Power) and Andrea Migno (Rivacold Snipers Team) are the last riders currently set to go straight to Q2.