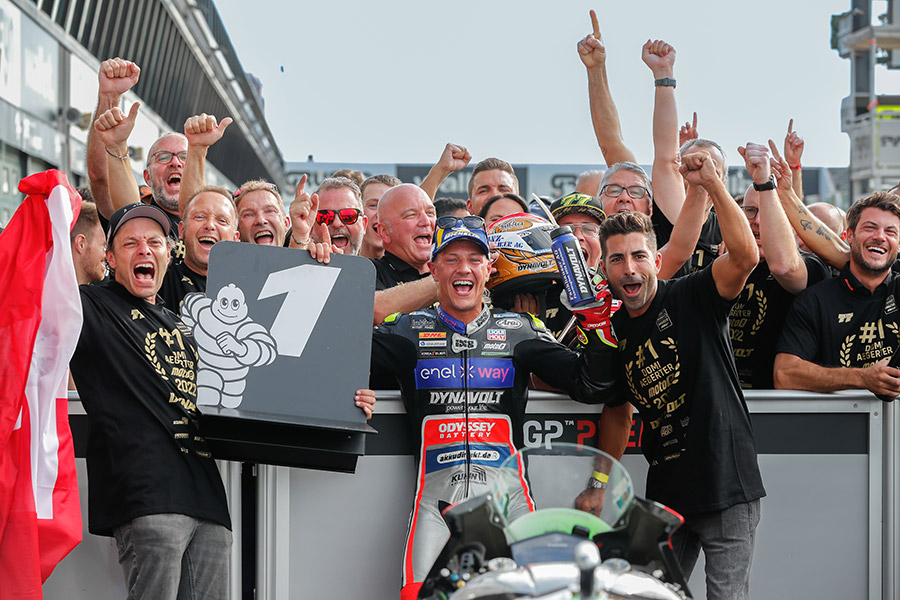 As the lights went out, it started well for Granado as he sliced up to third through the opening corners and then past Aegerter for second at Turn 2 on Lap 2, although less so for Miquel Pons (LCR E-Team) as the number 71 crashed out early. A lap later though, Granado hit the front when Casadei had a wobble between Turns 2 and 3.

Aegerter wasn’t going to let him get away, however. The Swiss rider got past Casadei at Turn 4 and then had a look at Granado when they arrived at Tramonto (Turn 10). The Brazilian held him off and got away with a slight moment later in the lap, but lost the lead as Aegerter attacked on Lap 4, getting it done at Tramonto this time round.

It looked like the battle would roll on to Sunday, but then came the drama as Granado went down a few corners later at Carro, leaving Aegerter with one hand on the trophy. The Brazilian remounted but, assuming he could not get back into the points-paying positions, Aegerter needed to finish only eighth to wrap up the title.

Initially he held onto the lead too, looking like he could seal it with a win, but on the run down to Quercia on the penultimate lap Casadei made his move. From there it stayed a tight fight between Casadei, Aegerter, Matteo Ferrari (Felo Gresini MotoE™) and Jordi Torres (Pons Racing 40), but Casadei closed every door to perfection – and Aegerter was forced to settle for second, at least in the race.

Ferrari took third and another impressive podium at Misano, with Torres right back up at the sharp end after a tougher season of injury struggles. Alex Escrig (Tech3 E-Racing) got home in fifth for a second top five in a row, ahead of Niccolo Canepa (WithU GRT RNF MotoE™ Team), Hikari Okubo (Avant Ajo MotoE™), Kevin Manfredi (Octo Pramac MotoE™), Xavi Cardelus (Avintia Esponsorama Racing), and Hector Garzo (Tech3 E-Racing). On a tough day for LCR, Granado was classified 17th while Pons was the only non-finisher.

Aegerter is now the 2022 FIM Enel MotoE™ World Cup Winner, and after coming so close last year in a dramatic finale. Now, just one day remains in the 2022 season, and it will be a particularly special one as we farewell the Energica Ego Corsa which has served the category so well for its first four, exhilarating years.