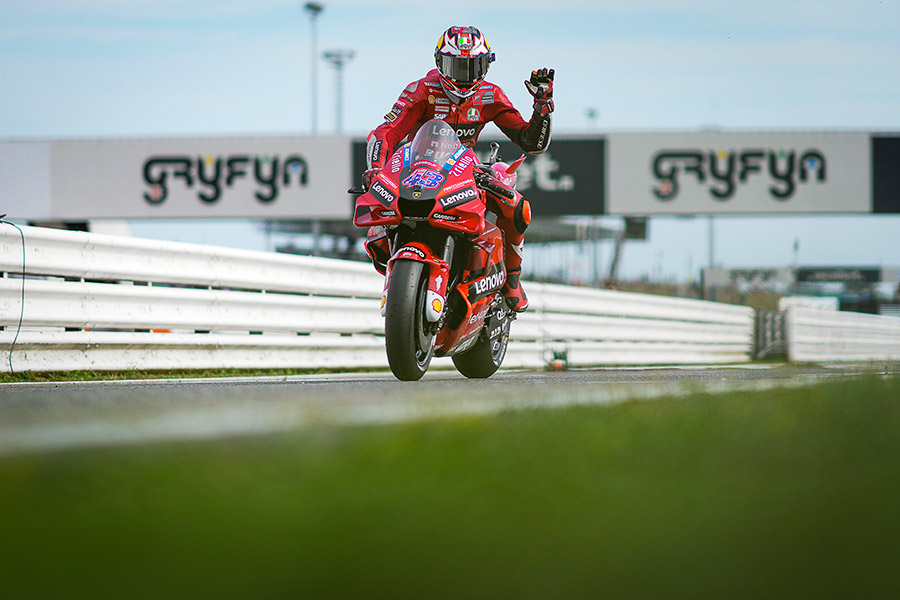 Jack Miller (Ducati Lenovo Team) has become the eighth different polesitter of the season after a true thriller of a qualifying session at the Gran Premio Gryfyn di San Marino e della Riviera di Rimini, with rain threatening and some falling but slicks winning out in the end. It’s Miller’s first pole in four years and second ever in the premier class, and he took it by just 0.015 to become the eighth different polesitter of 2022, equalling the record of most in one season.

The rider Miller pipped to the post was teammate Francesco Bagnaia, and behind the two, Gresini’s Enea Bastianini was third quickest exactly a tenth off the number 63. Still, the ‘Beast’ will start second as Pecco takes a three-place grid penalty for being slow on the line in FP1. Rookie Marco Bezzecchi (Mooney VR46 Racing Team), who made a late lunge into fourth, will therefore complete the front row ahead of Maverick Viñales (Aprilia Racing) and Bagnaia in P5.

Q1
Jorge Martin (Prima Pramac Racing) set the initial benchmark in the opening 15 minutes of qualifying before Bezzecchi set a 1:31.961 to go top. Having been threatening all afternoon, spots of rain then started to fall with eight minutes to go, with Bezzecchi and Martin sitting inside the all-important top two.

With three and a half minutes to go, Luca Marini jumped ahead of Martin to make it a Mooney VR46 Racing Team 1-2 – and the Italian couldn’t have timed it any better. The rain had started to fall heavier as the riders all had to pull out of their final flying laps, meaning Bezzecchi and Marini were heading into Q2, seeing Martin miss out by 0.011s.

Q2
Tensions were high ahead of the 15-minute pole position fight, with most of the riders starting the session on wet Michelin tyres – all but Miguel Oliveira (Red Bull KTM Factory Racing). And straight away the Portuguese rider was three seconds quicker than Bagnaia with the Italian on wet tyres, it was now clear the slick tyres were the correct choice.

Bagnaia, Fabio Quartararo (Monster Energy Yamaha MotoGP™) and Aleix Espargaro (Aprilia Racing) – the top three in the World Championship – were some of the last to venture out on slicks. Meanwhile, Bezzecchi had gone fastest by half a second before Miller moved the goalposts, the Australian briefly sat 0.7s quicker than anyone before Oliveira cut the gap to 0.2s.

As expected, the times were tumbling lap by lap. Bezzecchi blitzed his way to provisional pole before Bastianini found a 1:33.812 to go quickest. Miller then split the Italians to slot into P2, 0.021s off Bastianini’s time, as red sector times littered to timing screens. Miller and Bastianini exchanged P1 again before Bagnaia took over top spot with a 1:32.413, as Johann Zarco (Prima Pramac Racing) decided it was his turn to lead the session. Viñales then gatecrashed the Ducati party to go second, 0.090s off Zarco, as Championship leader Quartararo found himself P7 with just over a minute to go.

That became P5 heading onto his final lap, but the Frenchman was half a second away from provisional pole. A 1:31.899 from Miller was the new time to beat but teammate Bagnaia was 0.083s under his time at the third split. Was it enough? Not quite. Pecco went into P2 with Bezzecchi going third, Marini made a late charge into the top six before Viñales jumped up to P5, but no one was able to better Miller on Saturday in Misano.

The Grid
Despite qualifying second, Bagnaia will launch from P5 for the San Marino GP after his mistake in FP1. That means Bastianini will start from the middle of the front row in P2, and fourth qualifier Bezzecchi moves up a row to line up third. Viñales is the final rider to benefit from Pecco’s penalty, the Spaniard will be eyeing at least a podium from P4 with Bagnaia – crucially – starting ahead of his main title rivals in fifth. Zarco joins Viñales and Bagnaia on the second row in sixth.

Marini leads the third row ahead of the top two in the World Championship: Quartararo and Aleix Espargaro. It wasn’t the Q2 they would have been looking for, but it will make for very interesting viewing to see how the Yamaha and Aprilia stars progress on Sunday afternoon. Oliveira, Franco Morbidelli and Alex Rins (Team Suzuki Ecstar) complete the top 12.

All the drama from Q2 gears us up for a tantalising encounter at 14:00 local time (GMT+2) on the Riviera di Rimini. Don’t miss it as Bagnaia aims to become the first Ducati rider to win four in a row, Miller wants a win, Aleix Espargaro aims to cut the gap, Bastianini could clinch a fifth successive Misano podium… and Quartararo faces a fight back.

Mooney VR46 Racing Team’s Celestino Vietti held on to Moto2™ pole at the Gran Premio Gryfyn di San Marino e della Riviera di Rimini, despite a late crash. The Italian was sitting on a 1:35.996 with the chequered flag out on Q2 at Misano when he lost the front at Turn 8, but no one was able to steal pole off him.

Vietti will share the front row with Albert Arenas (Inde GASGAS Aspar Team) and Alonso Lopez (+Ego Speed Up) in a top three covered by just under two tenths of a second. Importantly, he is two rows ahead of the two riders ahead of him in the World Championship, namely Ai Ogura (Idemitsu Honda Team Asia) and Augusto Fernandez (Red Bull KTM Ajo).

After the drama of MotoGP™ qualifying, a dry track greeted the intermediate class field for their Q1 session and remained that way for Q2. Vietti completed just one flying lap before returning to the pits, while Arenas moved almost three tenths clear of the field when he set a 1:36.189 halfway into the session.

Vietti closed the gap when he came back out and clocked a 1:36.330, then moved to the very top with a 1:35.996 next time through. Arenas was also setting red sectors and followed the VR46 pilot across the line in a time of 1:36.097 to at least tighten his grip on a front row berth, before Free Practice pace-setter Lopez jumped from 17th to third on a 1:36.186. Vietti threatened to go even faster when he achieved what would be the second-fastest lap of the session with a 1:36.025, before the spill on his final flyer, but it would not prove costly – rider okay.

Aron Canet (Flexbox HP40) grabbed fourth spot, ahead of Tony Arbolino (Elf Marc VDS Racing Team) and Lorenzo Dalla Porta (Italtrans Racing Team), the latter of whom topped Q1 on his way to claiming a berth on Row 2. There will be plenty of attention on Row 3, and while seventh is another solid qualifying result for 17-year-old Spaniard Fermin Aldeguer (+Ego Speed Up) – even if he too crashed at Turn 8 – the greater interest is about the two men who will line up alongside him. Championship leader Ogura qualified eighth on a 1:36.489 and the rider who now trails him by a single point, Fernandez, earned ninth on a 1:36.527.

Jake Dixon (Inde GASGAS Aspar Team) is set to start from 18th after failing to set a time in Q2. He crashed on his first flyer at Turn 15 and while rider was okay, bike was not.

Straight after we saw David Muñoz (BOE Motorsports), Lorenzo Fellon, the Frenchman’s SIC58 Squadra Corse teammate Riccardo Rossi and Adrian Fernandez (Red Bull KTM Tech3) come through Q1, light rain started to fall at the Misano World Circuit Marco Simoncelli. The rain flags were still out when the Q2 runners rumbled out of pitlane, but it wasn’t heavy enough to head out on wet tyres – a tense 15 minutes were coming up for the Moto3™ pole position contenders.

The first laps were set as Moreira and Izan Guevara (Gaviota GASGAS Aspar Team) set identical times – a 1:44.254. But that time didn’t last long as the effort to beat. Rossi shot to P1 with a 1:43.195 to lead Öncü by just under a tenth, before Guevara set a new benchmark to lead the session by 0.108s with seven minutes to go.

The times were tumbling every lap as the riders got to grips with the iffy conditions. Moreira was back at the summit with Öncü second, with Yamanaka going third. With a minute left, Guevara again made his way up to P1 but it was short-lived. Moreira and Yamanaka went 1-2 to shove Guevara to P3 with one last time attack available.

Pushing out of the final corner, Guevara lost the rear slightly and was unable to improve his time. However, Öncü produced a last lap stunner to claim pole position, and Holgado pinched second off Moreira as the top four were split by a slender 0.040s.

Behind the top three of Öncü, Holgado and Moreira, Yamanaka is the rider leading the second row as the Japanese rider missed out on a front row start by 0.016s. Guevara slipped to P5 by the end of the session, with compatriot Carlos Tatay (CFMOTO Racing PrüstelGP) joining the rider second in the title race on the second row.

Dennis Foggia (Leopard Racing) will launch from P7 on home turf, the Italian has John McPhee (Sterilgarda Husqvarna Max) and Andrea Migno (Rivacold Snipers Team) alongside him, while Fernandez rounded out the top 10 after progressing through Q1.

It was another difficult qualifying session for World Championship leader Sergio Garcia (Gaviota GASGAS Aspar Team) as the Spaniard is forced to settle for P13 on the grid – work to do for Garcia, but he always brings an extra sprinkle of speed on race day. Austria winner Ayumu Sasaki (Sterilgarda Husqvarna Max), meanwhile, has another comeback challenge from P17.