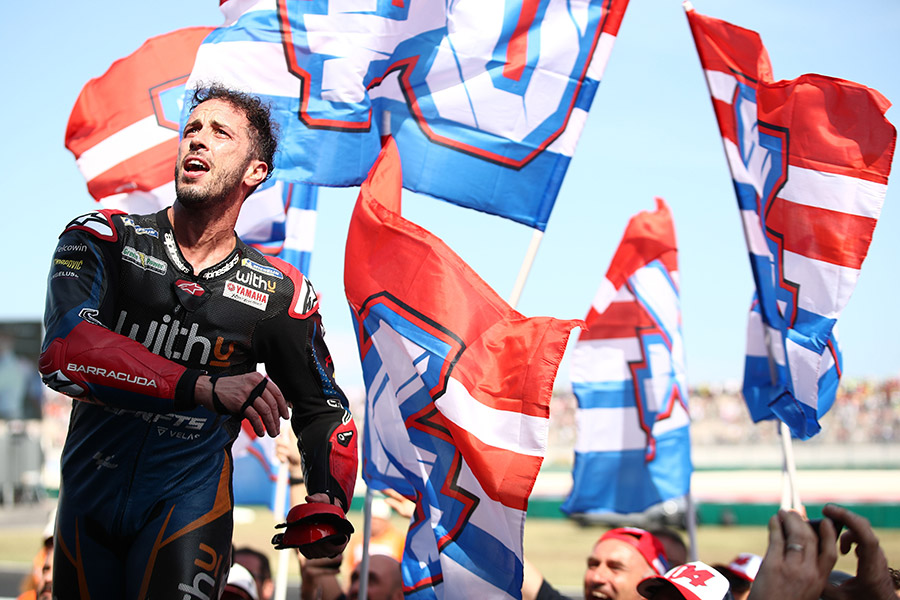 Andrea Dovizioso’s emotional farewell from MotoGP at his home Grand Prix in Misano has truly been a tribute down the memory lane as the whole MotoGP paddock recalls back some of his great battles over 20 years of his racing career. From his 125cc championship win in 2004, to his glorious 250cc achievements and his move up to the premier class in 2008 with some epic showdown challenging the young Marc Marquez from 2017 to 2019 at the Red Bull Ring, Losail and Motegi.

Over the course of his long career, the Italian achieved 20 poles, 24 wins, 103 podiums and 3,796 points in all classes. He is the only rider to win a MotoGP race in three different decades in 2000s, 2010s and 2020s placing him as one the MotoGP greats and one of the final two from the class of 2010 to retire from the World Championship.

In his final race, he launched off from P18 on the grid and managed to keep a decent pace throughout all his final 27 laps. Due to several crashes in front of him, he moved up the order already on the first laps and was in 12th on the third lap. Thanks to his strong rhythm, he managed to defend this position over the line to collect some ultimate four points in the MotoGP World Championship.

Darryn Binder on the other side, came off the line well from P21 and was 17th after the first lap. He managed to climb up to P13 on lap three, but lost a place before halfway through the race already. In the final laps, the South African MotoGP rookie couldn’t push like before anymore and had two more riders passing him. He crossed the line in 16th and thereby just missed out on the points scoring positions.

“At the end, it has been a good race. There was a big disaster in front of me at the beginning but I did a good start, I was able to get some positions because a lot of riders crashed. But at the beginning of the race I was always trying but I couldn’t be fast. However, from the middle of the race until the end, I was able to be very consistent. I was very focused on that because I could keep the 12th position. At the end, I’m happy with that, I’m happy to finish here with the fans and all the people. Thank you very much to everyone.”

“After warm up this morning, I was confident that I will have a good race today. After the start, I managed to stay out of trouble, there was a lot going on at the first couple of laps. I really had a good pace, I felt really strong at the beginning of the race running inside the points, but unfortunately at the last 10 laps, I really started to struggle with the rear tyre and I wasn’t able to maintain my position. It’s sad to end the race that way but in the end I will take the positive and will work on these areas I struggled today in the test on Tuesday and Wednesday and find the settings that can help me a little bit towards the end of the race and move on to Aragon.”