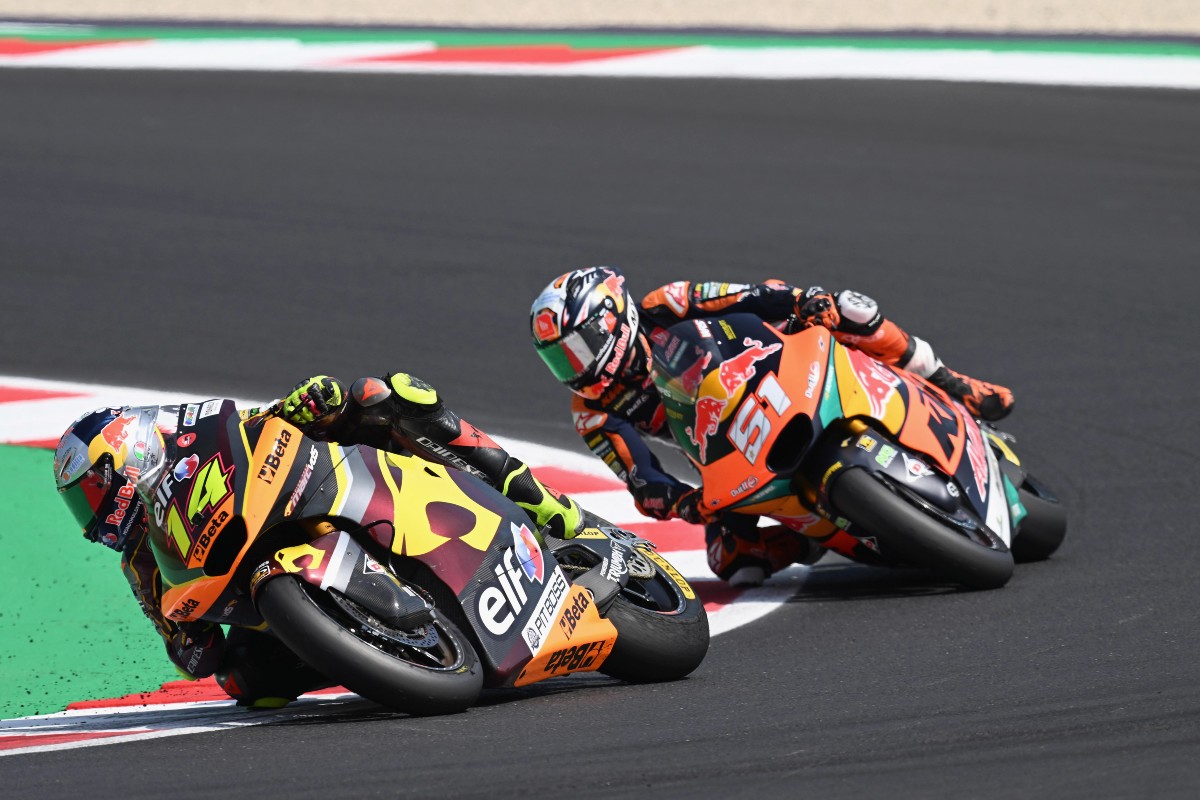 Tony Arbolino took a hard-fought seventh place in a race of attrition at the San Marino GP while Senna Agius had to retire from the race on the seventh lap.

In spite of forecasts which predicted rain, blue skies and stifling temperatures of 28 degrees greeted the Elf Marc VDS Racing Team riders for the San Marino GP round 14 of 2022.

The 25-lap race was one of attrition with just 17 of the 31 riders completing the full-race distance.

Italian Arbolino was one of only four riders to opt for Dunlop’s softer option rear tyre and soon found his rhythm in an opening when several leading riders crashed out.

Having established himself in eighth in the early laps, Tony rode a measured race in difficult conditions to come home seventh, after a late fight with Pedro Acosta.

Tony sits now fifth in the World Championship with 117 points to his name, 81 behind leader Augusto Fernandez.

I’m happy about the weekend. We made a small step forward at this round. After Silverstone and Austria, we were further forward with the bike. I was feeling better and better. We still need to fix some details and be focussed on my riding style and myself because the bike is improving a lot. This is the target for the next race, before the fly-aways. In Aragon we need to be focussed on that and keep going. I want to thank my crew, who are doing an amazing job. We’ll keep working to improve my feeling and we’ll be there soon.

17-year old Australian Agius made a strong start from 25th on the grid and gained four places on the first lap.

By lap four, Senna had passed two more riders with clinical moves before misjudging an overtake on Filip Salac on lap five, which pushed both men off track.

Although he re-joined the race, there was significant damage to Senna’s bike, forcing him to retire at the end of lap six.

The race started really well. I passed a few riders on the brakes and was feeling really good. I needed to pass the rider in front of me to get to the group ahead to have a good race. I could see the group was starting to split. I passed Ramirez but misjudged the distance between me and Filip. I tried to stop to avoid him and in the end I hit him. I didn’t crash but the impact was quite big and something was bent on the front. I had to retire, there was no way I could continue. I’m disappointed but that’s the way it is. I made a mistake – it’s as simple as that. Over these two races I’ve learnt that you need to manage your emotions on the bike and the risk. Today I should’ve been a bit more patient. I just want to apologise to Filip and to the team as well because I think today could’ve been really good.