Bagnaia scores his fourth consecutive win at #SanMarinoGP, Miller crashes out of the lead 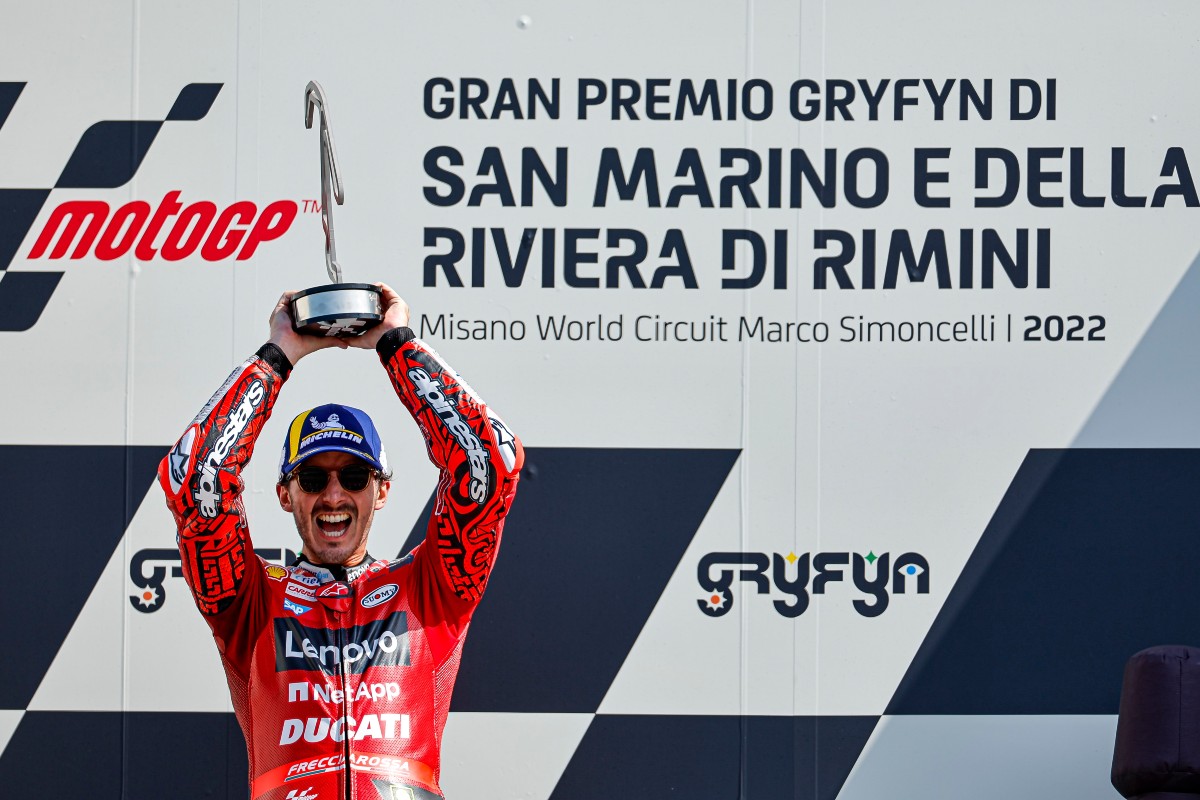 The Grand Prix of San Marino and Riviera di Rimini, which took place this afternoon at the Misano World Circuit Marco Simoncelli, ended with another thrilling victory for Pecco Bagnaia, who takes his tenth win in MotoGP and sixth this season. For the Italian rider, it was also his fourth consecutive victory this year, an achievement that puts him rightfully in the history of Ducati, being the first rider from the Bologna-based manufacturer to achieve this in MotoGP.

Starting from fifth on the grid, Bagnaia made an excellent start that allowed him to be at the front before moving into the lead after two laps, closely marked by Maverick Viñales. Towards the middle of the race, the Spaniard was overtaken by Enea Bastianini (Gresini Racing), who quickly reduced the gap to Bagnaia to cross the line just 34 thousandths behind the fellow Ducati rider. Thanks to today’s victory, Pecco climbs to second place in the overall standings, 30 points behind Quartararo.

It was an unlucky race instead for teammate Jack Miller. The Australian rider, starting from pole, had managed to hold the lead after the start, but on the second lap, he suffered a crash. Miller still managed to re-join and finish the race in eighteenth place. After the fourteenth round of the season, Jack is sixth in the overall standings, while Ducati and the Ducati Lenovo Team maintain the lead in both the Constructors’ and Teams’ Championships.

Today was a really tough race. In the first few laps, I didn’t have any grip at the front or the rear, and I was afraid to push: I could feel Maverick very close, and I could only brake hard to try to put him in trouble and avoid him overtaking me. When the weight in the tank dropped, the grip improved, and I could pick up the pace and push to the end. We are now 30 points behind Quartararo, but the fight for the Championship remains tough, and we can’t afford any mistakes. We have to stay focused and think race by race.

After I managed to take the lead, I started to push to try and create some margin over the rest of the group, but on the second lap, I went a little wide, ended up on the kerb and crashed. It’s a shame, but these things happen in racing. I try to look at the positive side of this weekend: we were always competitive, and my feeling with the bike continues to be incredible, so I can’t wait to get back on track at Aragon to try again.

The Ducati Lenovo Team riders will remain in Misano for two days of official post-race testing on Tuesday and Wednesday before returning to action for the fifteenth round of the 2022 season, the Grand Prix of Aragón, at the MotorLand Aragon in Alcañiz (Spain) from 16th-18th September.