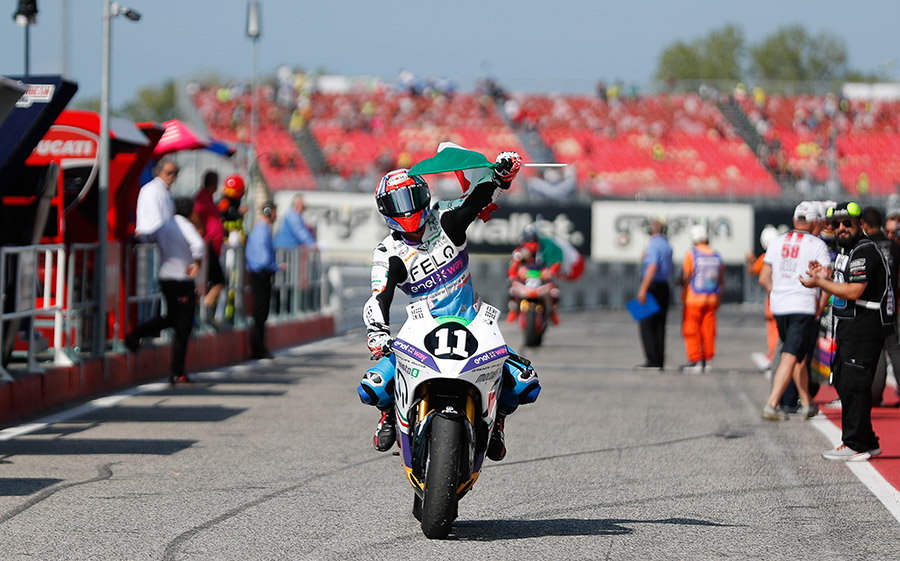 An era has come to an end for the FIM Enel MotoE™ World Cup, and the second race of the weekend at Misano World Circuit Marco Simoncelli meant sure it ended on an incredible high. Down to the wire in electric style, Matteo Ferrari (Felo Gresini MotoE™) vs Mattia Casadei (Pons Racing 40) was a contender for best finish yet, with the ‘King of Misano’ maintaining the moniker with a late attack on Casadei. Eric Granado (LCR E-Team) found some redemption with another podium in third place, sideways style back in action.

When the lights went out, Casadei got the jump and took a clear lead to the first corner, ahead of pole-sitter Dominique Aegerter (Dynavolt Intact GP), Granado, and Jordi Torres (Pons Racing 40). Ferrari lost three positions relative to where he qualified but had recovered two of them to be running fifth by the time he exited Turn 4. Just ahead, the top two moved a second clear of the rest on Lap 2, but Ferrari was up to fourth when he overtook Torres through the fast Curvone right-hander on Lap 3.

Otherwise, though, it was an unusually calm contest for the opening half of the eight-lap race – but this is MotoE™, and that was never going to last long. On Lap 5, Aegerter moved into the lead when he went down the inside of Casadei at Carro,), only for Casadei to reclaim the lead on the run to Quercia on the next lap. By then, Granado was lurking too.

When Aegerter had a moment at Carro a few corners later, Granado was right behind them, and Ferrari had made it a lead group of four. Ferrari was into a podium place when he overtook Granado on Lap 7 at Carro, before Aegerter nearly wiped out Casadei at Turn 2 on the final lap. The Swiss rider gathered it up, but not before he had lost position to both Ferrari and Granado.

All told, it meant that the 2019 World Cup winner had what had seemed not too long ago to be an unlikely shot at victory, and take his shot he did. Locked together on the final lap, Ferrari passed Casadei at Turn 13, but the Pons rider wasn’t giving up. He sent his Ego Corsa down the inside at the Misano corner (Turn 16), only for Ferrari to pull off the cutback. They shot towards the line with the number 11 just ahead, Ferrari taking the win by just 0.195 seconds. It was also a pass which would decide who finished third in the World Cup for 2022, behind Aegerter and Granado, and Ferrari sealed that deal.

Granado took the chequered flag in third, ahead of Aegerter and another solid finish from a fitter Torres. The rest of the top 10 was Niccolo Canepa (WithU GRT RNF MotoE™ Team) after duelling Miquel Pons (LCR E-Team) early on, the LCR rider forced to settle for seventh. Alex Escrig (Tech3 E-Racing), Hikari Okubo (Avant Ajo MotoE™), and Kevin Zannoni (Ongetta SIC58 Squadracorse) completed the top ten. Maria Herrera (Zinia Aspar Team) was the sole DNF of the race, limping away from a crash on Lap 6 but rider ok and ready to take on the next challenge: a Moto3™ wildcard at MotorLand with an all-female team.

And so, a final, stunning duel brings the Energica era to an end, and what an era it was. Incredible reliability and fantastic racing are the buzzwords as the factory goes down in history as the one to make electric two-wheeled racing a viable parallel path of competition, alongside smart charging partner of the Cup Enel X Way, whose Juiceroll race edition and constant innovation have played a huge part in MotoE™’s success.

#SanMarinoGP
Get All Our Latest News Sent Direct To Your Inbox
Join 25,261 other subscribers.
Follow on Social Media
Get the VROOM Podcast