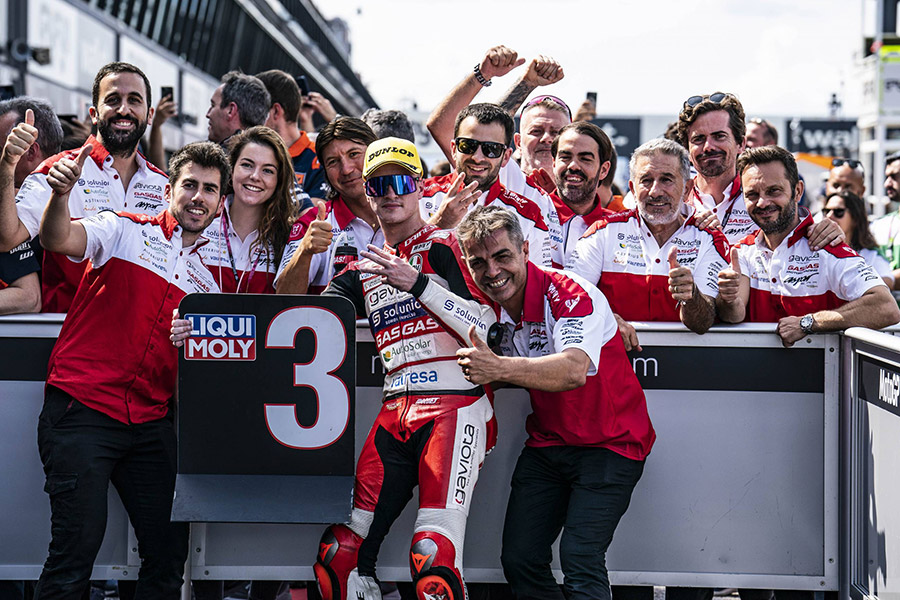 Gaviota GASGAS Aspar Team rider Izan Guevara took his eighth podium finish of the season and now leads the championship standings with 204 points, 11 points ahead of teammate Sergio Garcia. Denis Foggia won the race and is third in the overall standings with a total of 169 points.

Guevara fought an intense battle with Dennis Foggia, Jaume Masia and Deniz Öncü. The Spanish rider was the leader of the group in the first part of the race, but later on, Foggia and Masia improved their pace and managed to overtake the Gaviota GASGAS Aspar team rider, who took third place just 0.334 seconds off the Italian. It was a tough race for Sergio Garcia as, despite crashing on lap four, he rejoined the race and tried to catch up with the group. However, after fighting for 13 more laps, the rider was unable to finish the race and is now second in the overall standings.

3rd Izan Guevara (+0.334):
“I’m very happy to be back on the podium after the last races in Silvestone and Austria. The race went very well, in the first part of the race I led the group and I got a gap of 0.5 tenths over the second. I’m satisfied with the pace I did on my own. The tyres wore out quickly and I was caught by a group of 4 riders, with whom I fought until the last lap. After three races after the summer break, I am the leader of the championship. We will try to keep it that way and we will keep working to have a good race in Aragón.”

Sergio García Dols:
“It has been a weekend to forget. We have had a dynamic in the last races in which we haven’t worked as we should and we have to change it now for Aragón. I’m going to focus on training and focusing on myself, I’m still in the fight and there’s still a long way to go in the championship. I’m more motivated than ever to come back strong and do a good race as I know how at Motorland.”