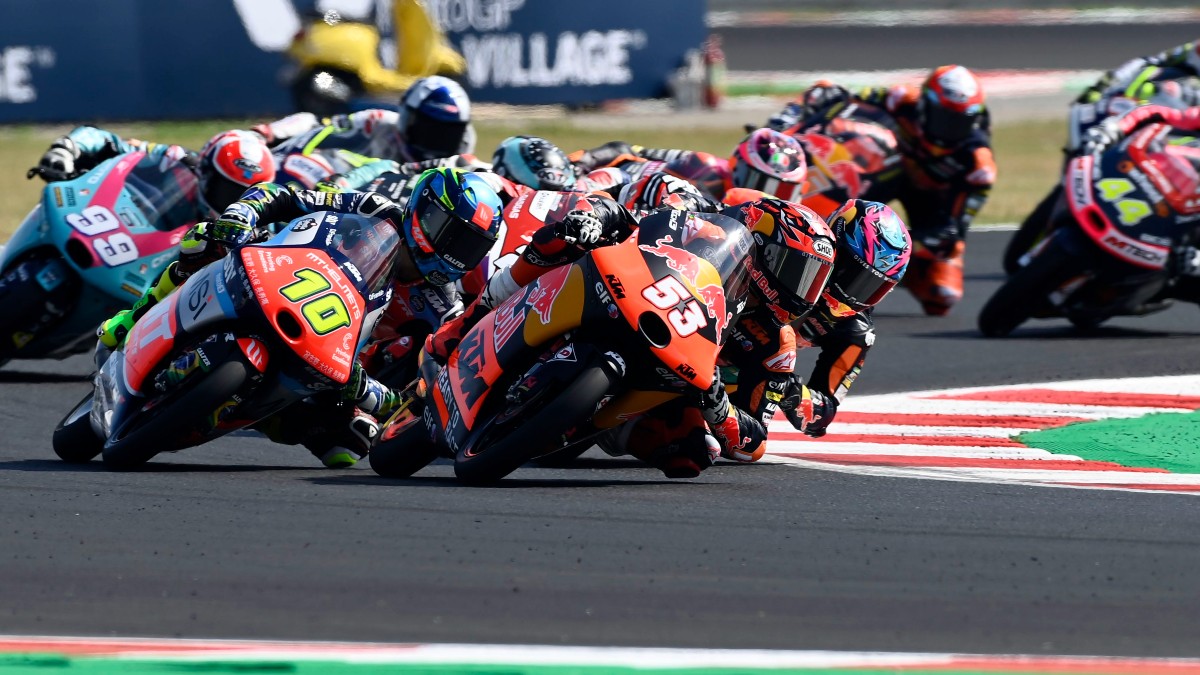 Red Bull KTM Tech3’s Deniz Oncu approached the San Marino Grand Prix as the man to beat today as he was set to start from the pole position, his third of the season, after Portimao and Mugello. Adrian Fernandez provided a solid qualifying day and got himself to a P10 start all the way from qualifying 1 on Saturday.

Poleman Deniz Oncu took a rocket start to his Gran Premio Gryfyn di San Marino e della Riviera di Rimini as he led the way in the first lap. Early battles with usual rivals saw him battle it out within the top 5 for the first five laps, before he slightly lost the leading group due to a small mistake. Being one of the fastest lap after lap, he progressively caught back the riders ahead after being more than one second away from them. With five laps to go, he made a move on KTM academy teammate Holgado to settle in P4 just behind Masia. The final laps were all about fighting for a podium, but Oncu came short by 0.119 seconds as he passed the chequered flag in fourth.

Adrian Fernandez did not have an ideal start as traffic in turn 1 at the start saw him going straight and he lost many positions as he found himself outside of the top 20. He was able to refocus but everything had to be redone. He finished in P16, outside of the points, a great shame for the Spaniard who had had a really strong weekend so far in Italy. Both Red Bull KTM Tech3 riders will be looking forward to heading to Aragon in two weeks time, for the fifteenth round of the Moto3 World Championship.

We managed to have a really good weekend here in Misano despite my shoulder injury. It was definitely not easy to fight the pain, but we were amongst the fastest all weekend. Today, I did a very good race again and I felt that I was able to fight for the podium. Unfortunately I came too short, again, and finished in P4. I am disappointed of course, but we head to Aragon with important points for the championship. I had a good result there last year, so I’ll be looking forward to doing at least as good.

It was not the day I was hoping for. At the start, I touched other riders and ended up going straight on the first corner to find myself last. I tried to refocus and overtook other riders as I had a good rhythm, but it was not enough. It is a great shame because I was starting from P10 after one of my best qualifying days. Tough to accept, but we will need to move forward and look at the next race in Aragon. Thank you to my team for their work.