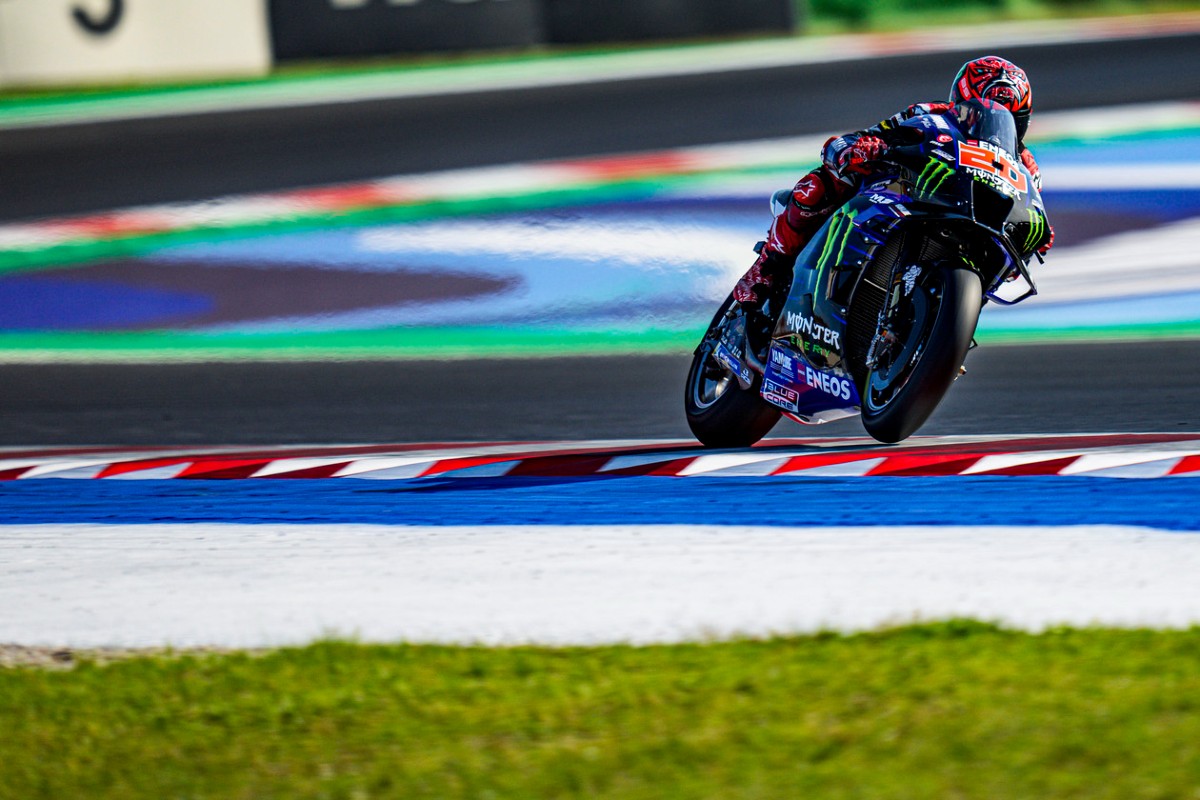 The pace was red hot at the Misano World Circuit Marco Simoncelli today in the MotoGP race. Monster Energy Yamaha MotoGP‘s Fabio Quartararo recovered from P8 on the grid to P5 across the finish line. Franco Morbidelli had hoped for a different outcome of his home race. He retired from the Gran Premio di San Marino e della Riviera di Rimini after two laps.

Quartararo had a decent start from eighth and, despite losing one position in the opening stages, he retaliated and ended the first lap where he started. With riders in front of him crashing early on, the championship leader was rising up the order. He was soon up into sixth, behind Aleix Espargaró, hunting down the leading quartet.

With 22 laps to go, Espargaró went wide in Turn 13. The Frenchman didn‘t need a second invitation. Into the top 5, he then had a gap of just over 0.8s to bridge, but he struggled to get closer. The riders behind him, however, were unable to keep up, making it a lonely ride for El Diablo. Still, he was pushing and on the limit every lap. Even a moment in Sector 3 with 10 laps to go that cost him crucial time didn‘t slow him down: on lap 20 he set a new personal best lap of the race. With two laps to go, he was right behind Luca Marini, eying up fourth place. He came tantalizingly close, but ultimately finished fifth, 5.771s from first.

Franco Morbidelli started his home race from P11 and found himself in the busy mid-pack through the twisty opening section. He dropped back to 13th position briefly and was fighting with Alex Marquez and Fabio Di Giannantonio. He was in 12th place the first time over the finish line.

The Italian was keen to make up ground but was unlucky to see his campaign end after only two laps when Di Giannantonio crashed right in front of him. Morbido was unable to avoid his compatriot. Both riders were unhurt and tried to re-join the San Marino GP but the Yamaha man was unable to and retired from the race.

After today‘s results, Quartararo‘s lead in the championship standings is now 30 points, with a 211 points total, while Morbidelli remains in 19th with 26 points. After Round 14, Yamaha remain second with 211 points in the Constructor championship, and Monster Energy Yamaha MotoGP remain third in the Team championship with 237 points.

The team will be back in action at the Misano track on Tuesday and Wednesday for a two-day official IRTA Test. After that they will resume their championship challenge on 16-18 Sept at Round 15 of the 2022 MotoGP World Championship, held at the MotorLand Aragón circuit in Spain.

It was a tough race, but it was actually one of the first races that I was behind another bike without a problem of the front tyre overheating or the front tyre pressure. I had more or less the same pace I had during practice. Of course, behind a rival I was struggling a bit more to make my pace than when riding alone. This fifth place is the position we deserved today. I had nothing more to give.