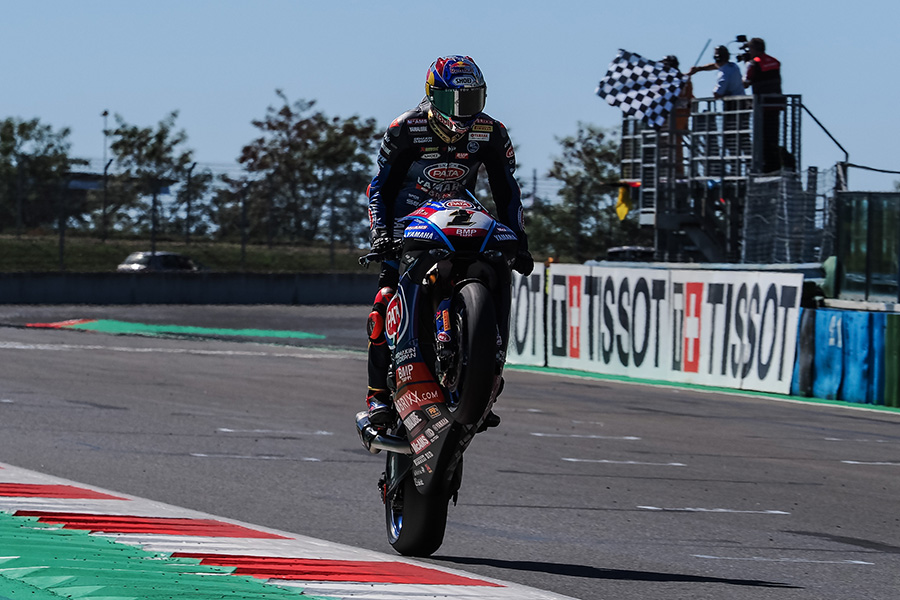 The MOTUL FIM Superbike World Championship campaign has had more surprises during Race 2 at the Circuit de Nevers Magny-Cours for the Pirelli French Round, with Toprak Razgatlioglu (Pata Yamaha with Brixx WorldSBK) claiming victory after a battle with both Michael Ruben Rinaldi (Aruba.it Racing – Ducati) and Axel Bassani (Motocorsa Racing), while drama hit two of the Championship contenders once again.

Like in Race 1 on Saturday, drama was never far away throughout the 21-lap race and it started on Lap 2 at Turn 13, when Jonathan Rea (Kawasaki Racing Team WorldSBK) made contact with Alvaro Bautista (Aruba.it Racing – Ducati); the Ducati rider going through the gravel and retiring from the race. Rea was deemed to be at fault for the clash and was given a Long Lap Penalty which he served on Lap 7, re-joining the race in seventh after losing a few positions.

The collision allowed Razgatlioglu and Bassani to move ahead and on Lap 3, Bassani made a move for the lead at Turn 11 and he remained there until Lap 8, when Rinaldi made an incredible double move into Turn 11 to move into first, with Bassani dropping down to third place. Rinaldi tried to pull away from Razgatlioglu at the front of the field but, at Turn 5 on Lap 14, the reigning Champion made his move for the lead of the race. After that, Razgatlioglu was able to drop Rinaldi to win by more than one second, with Bassani in third place.

It means Razgatlioglu’s gap in the Championship to Bautista is now just 30 points after taking his 71st podium, putting him level with Max Biaggi, as well as his 26th win. Rinaldi moves on to 13 WorldSBK podiums in his career while Bassani takes his third of his career and second of the French Round; the first time he has taken more than one podium in a single round.

Bassani claimed third place but he had to resist a late charge from Alex Lowes (Kawasaki Racing Team WorldSBK), with the British rider taking his second fourth place finish of the French Round. Lowes was six seconds clear of teammate Rea, with the six-time Champion only able to make up a couple of places to finish fifth; Rea trails Bautista by 47 points in the Championship. One rider Rea was able to pass was Scott Redding (BMW Motorrad WorldSBK Team), when Rea took advantage of Redding running wide at the 180 Degree corner to move up to fifth. Rea’s winless streak now spans 12 races, his longest since a run of 33 without a win in 2012 and 2013.

Oettl had a bit of a lonely race in the closing stages of the race, finishing seven seconds back from Lecuona but eight seconds clear of Lucas Mahias (Kawasaki Puccetti Racing), with Mahias claiming points at his home round. Sammarinese rider Luca Bernardi (BARNI Spark Racing Team) was 13th ahead of Robert Tamburini (Yamaha Motoxracing WorldSBK Team) in 14th place. Japanese rider Kohta Nozane (GYTR GRT Yamaha WorldSBK Team) claimed the final point as he finished in 15th place.

French rider Christophe Ponsson (Gil Motor Sport-Yamaha) was 16th at the end of his home round, finishing eight seconds back from Nozane and three seconds clear of debutant Oscar Gutierrez (TPR Team Pedercini Racing), with the Spanish rider missing out on points in Race 2 by around ten seconds. Oliver Konig (Orelac Racing VerdNatura WorldSSP) was 18th with Malaysian rider Hafizh Syahrin (MIE Racing Honda Team) was 19th, with Syahrin having a crash at Turn 13 on Lap 15 but he was able to rejoin.

Alongside Bautista as a retirement, Leandro Mercado (MIE Racing Honda Team) after a technical problem in the early stages of the race, while Michael van der Mark (BMW Motorrad WorldSBK Team) crashed out at Turn 15 on Lap 3. Xavi Vierge (Team HRC) crashed out of the race at Turn 3 on Lap 10. Eugene Laverty (Bonovo Action BMW) was the final retirement.

#FRAWorldSBK
Get All Our Latest News Sent Direct To Your Inbox
Join 30,271 other subscribers.
Follow on Social Media
Get the VROOM Podcast
Download our Vroom.GP App