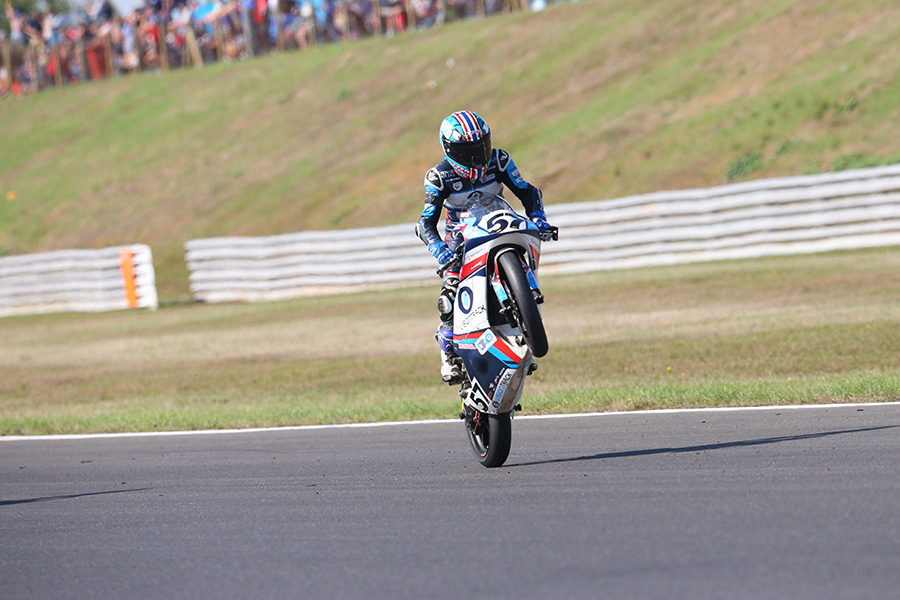 Johnny Garness (MLav VisionTrack Academy) only continued to extend his advantage on Sunday at Snetterton, with the newly crowned 2022 Honda British Talent Cup Champion coming home in clear air for a 12th win of the season as sparring partner Rhys Stephenson (Rocket Racing) slid out. The podium went down to Evan Belford (City Lifting by RS Racing) vs Harrison Crosby (Banks Racing) on the final lap and drag to the line, with Belford just coming out on top by 0.039.

Off the line, Garness got the jump and the holeshot as Stephenson lost out two positions, but the number 23 was able to quickly pick his way back through to tag back onto the race leader. The two, as we’ve seen several times already this season, then got down to building a gap as they once again pulled away to duel it out.

Behind, Crosby was in some clear air for much of the race, but Belford was closing him down. The number 52 took two Ride Throughs on Saturday for jumping the start and then breaking the pitlane speed limit, so was looking for some redemption as he closed in on the yellow machine ahead.

At the front though, it was an as you were for some time before suddenly drama hit for Stephenson. Garness’ only recent challenger overcooked it and slid out from just behind the number 57, leaving Garness alone with a good gap in the lead and it seeming like more a formality to make it win number 12.

That it seemed in some ways. The newly crowned Champion kept it calm and carried on, coming home for another victory and to extend his lead even more ahead of the final races. Belford caught Crosby and the two exchanged positions before a tense final lap, with the number 52 just keeping it on the side-by-side drag to the line.

That’s a wrap on Snetterton, with one round and two races now remaining. Brown is still second overall despite 0 points from the penultimate round, and the closest battles are now Stephenson vs Crosby for third overall as they’re equal on points, as are Kiyano Veijer (Microlise Cresswell Racing) and Dessoy in the fight for the top five.

Snetterton
Get All Our Latest News Sent Direct To Your Inbox
Join 30,271 other subscribers.
Follow on Social Media
Get the VROOM Podcast