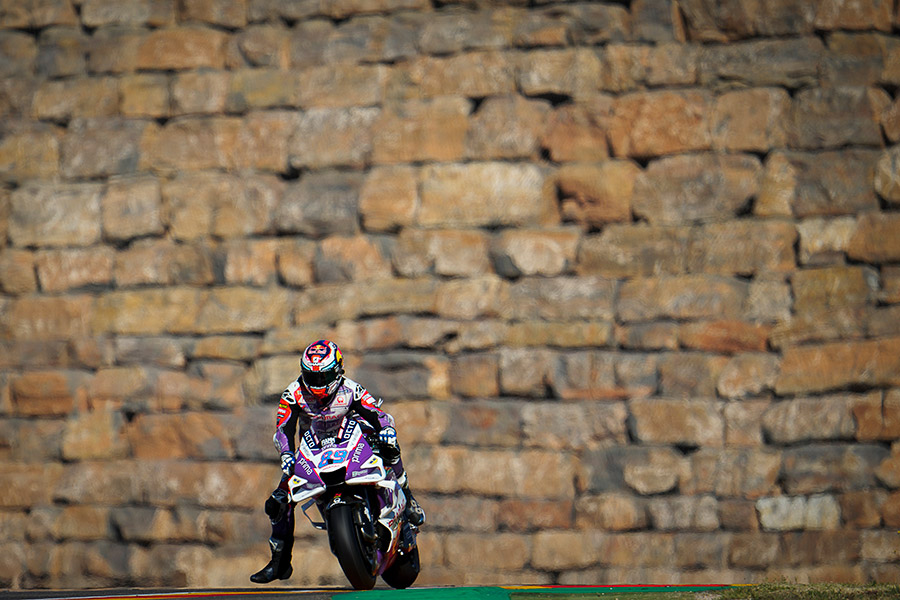 Prima Pramac Racing’s Jorge Martin heads into Saturday’s action at the Gran Premio Animoca Brands de Aragón with the time to beat after his 1:47.402 proved just enough to pip World Championship leader Fabio Quartararo (Monster Energy Yamaha MotoGP™) to the top. Johann Zarco made it two Prima Pramac Racing Ducatis in the top three but some headlines were stolen as Marc Marquez (Repsol Honda Team) enjoyed a successful Friday back in the office – the Spaniard ended Day 1 in P8, 0.359s off P1.

The times tumbled straight away in the afternoon as FP1 pacesetter Aleix Espargaro (Aprilia Racing) went from P1 down to P11, with Marc Marquez briefly sitting fastest before Francesco Bagnaia (Ducati Lenovo Team) climbed to the summit.

Then, after rising to P4, Aleix Espargaro crashed for the second time on Friday. The title chaser tucked the front at Turn 14 and was thankfully unhurt, but it wasn’t the start to FP2 Espargaro needed. Halfway through the afternoon stint, Marc Marquez, as we saw at the Misano Test, ventured out on the much talked about Kalex swingarm HRC have been testing, with Maverick Viñales (Aprilia Racing) then leading the way at the top.

Heading into the final 10 minutes, the top four riders – Viñales, Bagnaia, Quartararo and Luca Marini (Mooney VR46 Racing Team) – were split by just 0.051s. But the time attacks were about to come in. Alex Rins (Team Suzuki Ecstar) set a 1:47.665 to go fastest before both Quartararo and then Martin bettered Rins’ time, with Martin leading the way by 0.074s.

Marc Marquez was then shadowing Martin and the eight-time World Champion set three red sectors. However, a small mistake at the final corner saw the number 93 climb higher into the top 10 as the likes of Zarco and Enea Bastianini (Gresini Racing MotoGP™) improved late on.

Provisional Q2 places
Behind Quartararo in the Pramac sandwich, Bastianini’s last lap in FP2 saw the Italian claim fourth on the combined timesheets, one place ahead of compatriot and 2023 teammate Pecco. The 2021 Aragon GP race winner settled for P5 on the opening day, a couple of tenths shy of Martin. Rins and Viñales head into Saturday P6 and P7 on the timesheets, with Marc Marquez a very impressive P8 – and there was a beaming smile when he arrived back in the box at the end of the session.

Jack Miller (Ducati Lenovo Team) and Marini close out the top 10, but a big story of the day is Aleix Espargaro – one of the pre-race favourites – finishing outside the top 10 after his two crashes. A crucial FP3 lies ahead for the Aprilia star in his pursuit of an automatic place in Q2…

Plenty can still change on Saturday, however, with the premier class heading out for FP3 to decide those automatic graduates to Q2. After FP4 it’s then time for qualifying from 14:10 (GMT +2), with another crucial grid on the line for the Gran Premio Animoca Brands de Aragon.

Just before he was confirmed as a future MotoGP™ rider at GASGAS Factory Racing, Fernandez topped Moto2™ FP1 on a 1:52.925 while Canet was second-fastest in that session on a 1:53.057. Just prior to the halfway mark of FP2, they were split in terms of combined times when Lopez punched out a 1:53.011.

However, with less than four minutes of the day’s action to go, Canet crept up two positions when he clocked a 1:52.852 and that was how the top three would stay. Fernandez could not be accused of a lack of consistency, though, given his fastest lap time of FP2 at 1:52.952 was just 0.027 seconds slower than his FP1 benchmark. Canet also might not have had a chance to usurp his countryman had he crashed early in the session at Turn 14, but the Pons Racing rider pulled off an impressive save.

Ai Ogura (Idemitsu Honda Team Asia), who is just four points off the World Championship lead, ended the day in 12th. He’s behind Marcos Ramirez (MV Agusta Forward Racing) and just ahead of Jorge Navarro (Flex HP 40) and Zonta van den Goorbergh (RW Racing GP). That means neither of the Mooney VR46 Racing Team riders are in Q2 as it stands, with Celestino Vietti in 17th and Niccolo Antonelli in 27th, both having crashed in FP2 in separate incidents.

Fresh from his Misano win, Leopard Racing’s Dennis Foggia has gone fastest on the opening day of the Gran Premio Animoca Brands de Aragon, setting the pace in FP2 with a 1:58.507. That time left Foggia just under two tenths of a second clear of Sterilgarda Husqvarna Max’s Ayumu Sasaki and just over three tenths of a second up on Red Bull KTM Ajo’s rookie Daniel Holgado.

Sasaki was the fastest rider in FP1 on a 1:58.819 and that was still the fastest lap time of the day until the final two minutes of FP2, when Foggia jumped to the top of the timing screen with the aforementioned 1:58.507. Sasaki had an earlier crash on his way into the Reverse Corkscrew but, with the chequered flag out, the Japanese rider consolidated second with a 1:58.677, while Holgado’s best was a 1:58.830.

Joel Kelso (CIP Green Power) had a crash just minutes into FP2 at Turn 7 but sits ninth as it stands thanks to his time from earlier in the day, while David Muñoz (BOE Motorsports) rounds out the top 10. The cusp of the top 14 Q2 cut-off is full of notable names with Sergio Garcia (Autosolar GASGAS Aspar Team) 13th and John McPhee (Sterilgarda Husqvarna Max) 14th, with Tatsuki Suzuki (Leopard Racing) currently the first set to lose out in 15th. Two-time winner Jaume Masia (Red Bull KTM Ajo), meanwhile, is 20th after a session in which he had an off-track excursion at Turn 14. However, it is expected that FP3 will be decisive in terms of the qualifying order on Saturday afternoon.