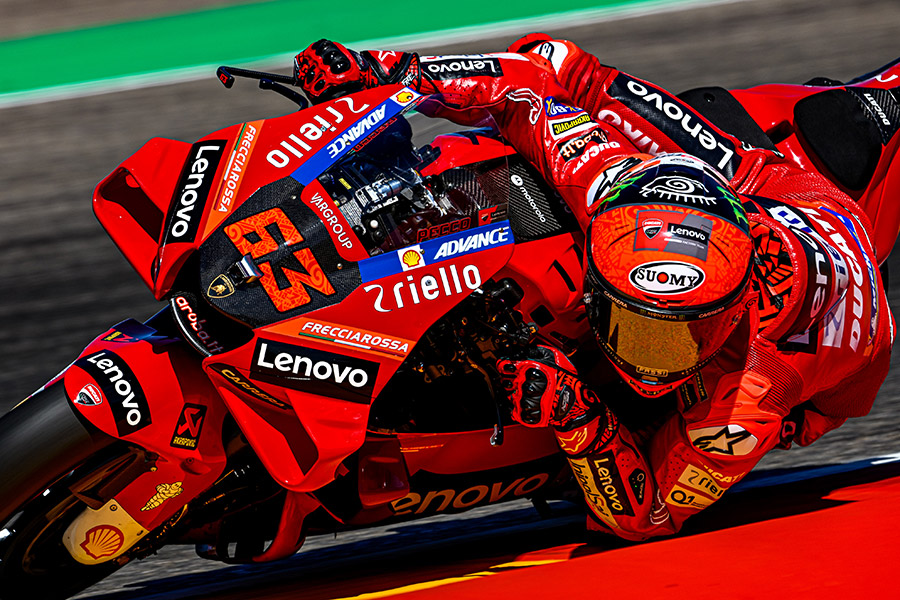 Francesco Bagnaia (Ducati Lenovo Team) has given himself the best possible opportunity to take a fifth straight MotoGP™ win, taking pole position with a new All Time Lap Record at the Gran Premio Animoca Brands de Aragon. Not only did Bagnaia take pole with a 1:46.069, just quicker than Jack Miller in a Ducati Lenovo one-two, he is set to start a full row ahead of his key World Championship rivals at MotorLand Aragon. Aleix Espargaro (Aprilia Racing) came from Q1 to take fourth on the grid, while Fabio Quartararo (Monster Energy Yamaha MotoGP™) could only manage sixth. Will that 30 point gap look even smaller come Sunday?

Q1
With so many big names starting Q1, someone was bound to be disappointed and it turned out that Marc Marquez (Repsol Honda Team) would be one of them. He was quickest after the first runs on a 1:46.909 before Johann Zarco (Prima Pramac Racing) went to the top on a 1:46.843, but then then Aleix Espargaro usurped both with a 1:46.569. Eight-time World Champion Marquez was unable to improve as a Yellow Flag came out too, and he will start 13th, sharing Row 5 with Luca Marini (Mooney VR46 Racing Team) and Fabio Di Giannantonio (Gresini Racing MotoGP™).

Maverick Viñales (Aprilia Racing) had his first crash of the year, the usual front-end wash-out at Turn 2, and is set to start 16th alongside Alex Marquez (LCR Honda Castrol) and Pol Espargaro (Repsol Honda Team). The latter was the crasher late in the Q1 session at Turn 5, the yellow flag cancelling a faster lap from team-mate Marc Marquez, among others.

Q2
As Q2 got underway, it was Enea Bastianini (Gresini Racing MotoGP™) who bolted out of the blocks with a 1:46.580 on his initial flying lap, and that would still be the benchmark when the first runs came to an end. As the track went quiet at the midway point, Bagnaia was still second on a 1:46.633 and Miller – one of two with a soft Michelin slick on the front as well as the rear (the other being Team Suzuki Ecstar’s Alex Rins) – was third. Quartararo was only seventh on a 1:46.952 and Aleix Espargaro sat 11th with a 1:48.742, but having reused a rear tyre after coming through Q1.

At a tougher track for man and machine, Quartararo was pushing hard to make up the deficit to Bagnaia and company when he was forced into a super save at Turn 2 on his penultimate lap, which ruined that flyer but gave ‘El Diablo’ a fighting chance. Quartararo was only 10th when the chequered flag came out and dug ever so deep with his final attempt, but the 1:46.802 was only able to move him up to sixth. Starting between Espargaro and Yamaha’s Frenchman on Row 2 will be another Frenchman in Zarco, who also advanced from Q1 before setting a 1:46.646 in Q2.

Marco Bezzecchi (Mooney VR46 Racing Team), Jorge Martin (Prima Pramac Racing) and Rins lock out Row 3, the latter a place ahead of where he started when he won at MotorLand. Brad Binder (Red Bull KTM Factory Racing) is in tenth ahead of teammate Miguel Oliveira and Takaaki Nakagami (LCR Honda Idemitsu).

With Marquez back on track but back in the pack, Quartararo mid-top ten and Aleix Espargaro only just up the grid, there are already a whole host of headlines to be made on Sunday. Can Bagnaia make sure they’re all about a fifth win in a row? We’ll find out at 14:00 (GMT +2) as the lights go out for the premier class…

It’s a good time to be Augusto Fernandez. On top of his move to MotoGP™ next year at GASGAS Factory Racing now being confirmed, the current Red Bull KTM Ajo Moto2™ rider has qualified on pole position at the Gran Premio Animoca Brands de Aragon with a 1:51.888. Fernandez will share the front row of the grid at MotorLand Aragon with none other than the Shimoku GASGAS Aspar Team duo of Albert Arenas and Jake Dixon, whom he beat to pole by 0.124 and 0.291 seconds respectively. His nearest rival for the intermediate class title, Ai Ogura (Idemitsu Honda Team Asia), is set to get away from Row 3 come Sunday afternoon…

Ogura had dropped into Q1 but got himself out of there with the second-fastest time of that initial, 15-minute session, before setting the early pace in Q2 on a 1:52.402. That was the fastest lap of the session until Aron Canet (Flexbox HP40) clocked a 1:52.274 with less than five minutes remaining, but the Flexbox HP40 rider’s time would ultimately prove insufficient for a place on the front row at all.

Dixon took over top spot with a 1:52.179 before Fernandez jumped from a provisional Row 4 starting berth to first position with his 1:51.888. No one would go faster than that, but Arenas did follow him across the line to improve from seventh to second with a 1:52.012. With last-start winner Alonso Lopez (CAG Speed Up) setting a late 1:52.270, Canet was shuffled to fifth and they are set to share the second row – one which is covered by just a single hundredth of a second – with Pedro Acosta (Red Bull KTM Ajo).

Behind that close trio, Tony Arbolino (Elf Marc VDS Racing Team) earned seventh with a 1:52.289 as the chequered flag was out, and will head up Row 3 alongside the Idemitsu Honda Team Asia duo of Ogura, who went as quick as a 1:52.397, and Somkiat Chantra. Joe Roberts (Italtrans Racing Team) rounds out the top 10, ahead of Fermin Aldeguer (CAG Speed Up), Filip Salac (Gresini Racing Moto2™), and Jorge Navarro (Flexbox HP40), the latter of whom crashed at Turn 5 earlier in the session.

Manuel Gonzalez (Yamaha VR46 Master Camp Team) took 14th, from Q1 pace-setter Cameron Beaubier (American Racing), Bo Bendsneyder (Pertamina Mandalika SAG Team), and Celestino Vietti (Mooney VR46 Racing Team). Vietti’s had already been an eventful day given he looked to be directly through to Q2 until he lost his best lap for a track limits breach and slipped into Q1. The Italian advanced from that opening qualifying session but was soon on the back foot again due to an early crash at Turn 1 and would ultimately claim just 17th on a 1:53.481, one spot up on Alessandro Zaccone (Gresini Racing Moto2™).

Autosolar GASGAS Aspar Team’s Izan Guevara held onto pole position at the Gran Premio Animoca Brands de Aragon, ending qualifying just 0.095 ahead of Sterilgarda Husqvarna Max’s Ayumu Sasaki and with Daniel Holgado (Red Bull KTM Ajo) set to start alongside the two in third. Guevara had been left vulnerable after proving too late to mount a final time attack, but in the end it was his team-mate and nearest rival for the title, Sergio Garcia, shuffled back as he prepares to line up in P12.

Holgado had been quickest once everyone had been through for one flying lap in Q2, on a 1:58.027, before Sasaki responded with a 1:57.963 next time through. Guevara then clocked a 1:57.868 to be the pace-setter with five minutes to go, but the final time attacks were still to come from most.

With the slipstream so important down Aragon’s back straight, there were the usual track position games at the start of the session and then again at the start of the final runs – even in terms of rolling bikes out of their boxes in pit lane, in some cases! Guevara left his run a little bit too late, however, and took the chequered flag before he had a chance to start another flying lap.

Fortunately for him, the first two rows did not change. Behind Guevara, Sasaki, and Holgado on the starting grid will be Tatsuki Suzuki (Leopard Racing), John McPhee (Sterilgarda Husqvarna Max), and Dennis Foggia (Leopard Racing). Suzuki managed a 1:58.271 on his first run and McPhee a 1:58.296, while Foggia improved to a 1:58.363 on his final lap to consolidate sixth position.

There was frustration for Deniz Öncü (Red Bull KTM Tech3), who blitzed FP3 but then pulled off the race track early in Q2 with an apparent technical problem. He and bike got back to the pits and while his KTM was eventually re-fired, it would be seconds too late for him to make it back around and start another hot lap before the chequered flag came out. The Turk will start 13th, ahead of Taiyo Furusato (Honda Team Asia), Adrian Fernandez (Red Bull KTM Tech3), David Muñoz (BOE Motorsports), Diogo Moreira (MT Helmets – MSI), and Riccardo Rossi (SIC58 Squadra Corse). Neither of the latter two set a time in Q2, with Moreira having a crash at the Reverse Corkscrew – rider okay.

Earlier in the day, Alberto Surra (Rivacold Snipers Team) was declared unfit, however, after sustaining a fractured left wrist in a crash in FP3.