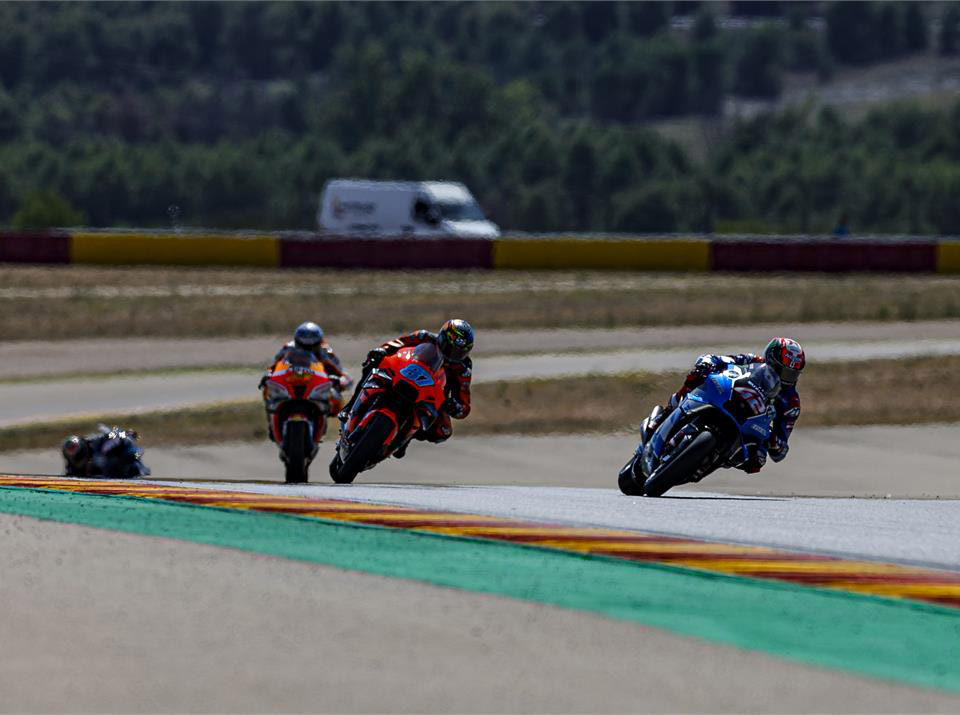 The Aragon Grand Prix proved to be a highly dramatic round, leaving a consistently quick Alex Rins wondering ‘what could’ve been’ despite solid ninth place finish.

The scorching Spanish circuit welcomed a bumper crowd while a powerful atmosphere was growing in the pre-race build-up – consisting of an opera singer, a brass band, and a minute’s silence for Queen Elizabeth II.

As Team Suzuki Ecstar’s sole representative after the withdrawal of Joan Mir, Rins was determined to perform at a high level and reach a strong result in front of his home supporters. As the lights went out for the 23-lap race, he was ready to attack from ninth on the grid, but a shockingly big crash between Marc Marquez and Fabio Quartararo left Rins with no choice but to take evasive action.

Thanks to his quick reactions and presence of mind, the Suzuki rider dodged a stricken Quartararo but ended up at the back of the pack. A further incident between Marquez and Nakagami left the field reeling, but Rins was able to keep his head down and dig deep, rising steadily through the ranks. By the 10th lap of the race he was up to 12th, and lapping with excellent pace. He kept this up throughout the race and closed as many gaps as he could to reach ninth. He briefly managed eighth place on the final corners but was retaken on the run to the flag and finished a respectable ninth.

Team Suzuki Ecstar will be back on track next weekend in Motegi, Japan.
Test Rider Takuya Tsuda, who was due to have a wildcard ride alongside Rins and Mir, will instead stand up as a replacement for Mir.

“My race sort of ended on the first lap, because after avoiding Fabio I was last. I tried to stay calm, close the gaps, and make some overtakes. In the end I’m disappointed because my rhythm was really good and I could’ve had a nice result, but at the same time I’m quite happy because I know I did my best to get back to ninth and I recovered many positions. I went to visit the crowd at the end of the race and they lifted my spirits too. Racing is unpredictable and today could have been much worse, so let’s keep a positive mindset heading to Motegi.”