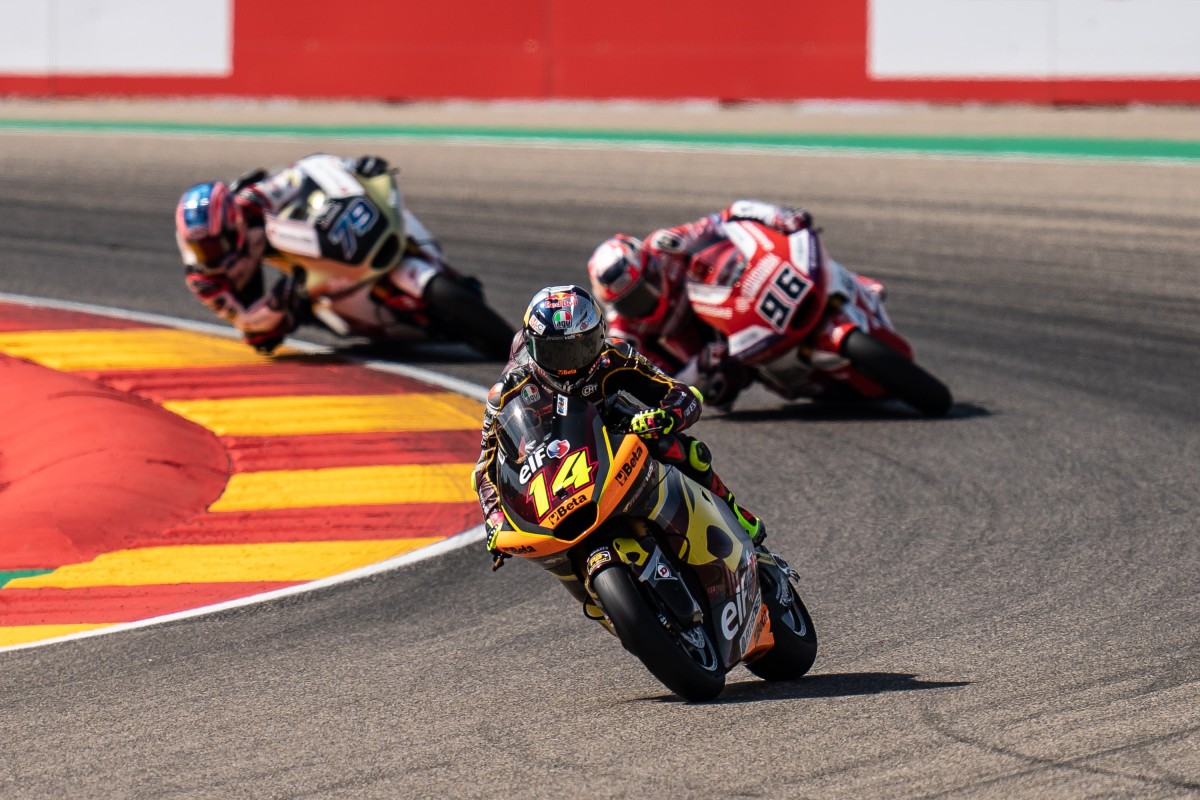 Tony Arbolino scored his first top five finish since June after fighting through the pack early on, while Senna Agius finished a brilliant 16th despite serving two Long Lap Penalties.

A total of 37,846 fans came out on Sunday to watch the 15th round of the season at Motorland Aragon, one of the most challenging layouts on the calendar.

Tony had a complicated start to the race as he had to take avoiding action when Alonso Lopez crashed in front of him on the exit of turn two. But the Italian soon found his rhythm and had climbed to fifth by the third lap.

By lap nine, the 22-year old had joined a four-way fight for the victory. But he soon found himself defending fourth place from Ai Ogura. Despite, out-braking the Japanese rider into the final turn, he ran wide and crossed the line fifth, 7.8s back of race winner Pedro Acosta.

The result means Tony maintains fifth in the World Championship with 128 points, 86 behind the leader.

It was an amazing weekend. Inside the box I saw an amazing mentality, an amazing feeling, an amazing mood from Thursday to today. We’ve been working really well during the week so I appreciate this a lot. I saw the podium so close and I felt so fast in the first part of the race. I want to keep going like that and I’m proud of myself for doing a good race. Of course, the podium was so close but we just need to keep working and believing. I want to thank the team and the crew. They did an amazing job. I felt really aggressive in the race and this is what I was missing in the past races. I made a step with my aggression in the braking points so this is what we wanted to do. Now we go to the Asian tour with a good mentality. The podium is close, I am sure of that!

Knowing he had to serve a Long Lap Penalty for an infringement during the previous race, Senna attacked the start, gaining four places in the first two laps to rise from 21st to 17th.

After serving his first Long Lap on the third lap, the 17-year-old showed excellent speed to join a six-rider fight for eleventh.

The Australian had climbed to 14th when he was given a second Long Lap Penalty for exceeding track limits. Even though he served it on the penultimate lap, Senna fought back once again to finish 16th, just two seconds back of tenth.

I felt really mentally solid out there today. After the first Long Lap I just put my head down and caught the group again. I was managing the drop of the tyres really well compared to the last races where I kind of lost my way a bit. I met some personal goals there. In the end I was pushing a bit hard and on the exit of turn 10 in the third sector, I ran onto the track limit. I knew I had made a mistake. I saw it on my dash and thought, ‘Another Long Lap!’ But I didn’t give up on the last lap. A top twelve was definitely on the cards today. We have to take these two penalties into consideration and be happy about today.